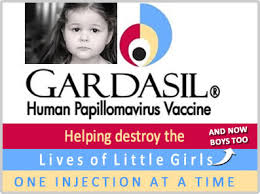 (NaturalNews) A new warning has emerged about the use of Gardasil, a vaccine for the human papilloma virus (HPV).
Gardasil (a four-strain HPV vaccine, or HPV4), is typically administered to both boys and girls as young as age 11 to prevent the sexually transmitted disease.
Developed by Merck, Gardasil received FDA approval in 2006. The disease did not become of concern until the 1980s, when research first suggested that there may be a connection between HPV and cervical cancer. However, whether this link actually exists has been a major point of contention. (RELATED: Learn more about the science fraud behind vaccine marketing at Vaccines.news)
As Natural News previously explained, the vaccine has reportedly been linked to severe complications such as cervical cysts, autoimmune diseases, and harm to women’s ovaries. Natural News has also detailed how one of the developers of the HPV vaccine has now disavowed the inoculation, given that that cervical cancer risk is extremely low in the U.S. and that 90 percent of all HPV apparently infections clear up on their own within two years.
According to the U.S. Centers for Disease Control and Prevention, Gardasil, Gardasil 9, and Cervarix are all safe and effective.
The American College of Pediatricians apparently is apparently not so sure. In a statement primarily written by Scott S. Field, MD, the organization cautioned that there may be an association between the HPV vaccine and premature ovarian failure (POF), which is also known as premature menopause. The statement indicates that the POF cases are very rare, however.
“Since licensure of Gardasil in 2006, there have been about 213 VAERS reports…involving amenorrhea, POF or premature menopause, 88% of which have been associated with Gardasil,” the statement asserts. VAERS is the CDC’s Vaccine Adverse Event Reporting System.
Amenorrhea is the absence of menstruation.
The statement also points out that family doctors are probably unaware of the possible link between HPV and premature ovarian failure and therefore may be not be reporting such cases to the CDC’s VAERS network, which could mean that the condition is more widespread.
The pediatricians’ organization statement also calls attention to the issue that before the vaccine was brought to market, “long-term ovarian function was not assessed in either the original rat safety studies or in the human vaccine trials.”
Another issue with Gardasil is a possible flaw in the pre-release safety trials in that the vaccine and the placebo both contained polysorbate 80. The placebo also contained aluminum adjuvant. “Therefore, if such ingredients could cause ovarian dysfunction, an increase in amenorrhea probably would not have been detected in the placebo controlled trials. ”
The College also noted that many of the young girls in the trials were on birth control, “which can mask ovarian dysfunction including amenorrhea and ovarian failure. Thus, a causal relationship between human papillomavirus vaccines (if not Gardasil specifically) and ovarian dysfunction cannot be ruled out at this time.”
The ACP statement calls for additional studies of the effects of Gardasil on rats, further CCD review of the appropriate VAERS reports, and alerting primary care doctors of the possible linkage between HPV and amenorrhea. The feds say that are are monitoring the situation and plan to conduct additional safety studies.
As part of the draining the swamp effort, President-elect Trump has named Robert F. Kennedy Jr., a vaccine skeptic, to a committee to study vaccine safety. The committee will have its hands full, in part because the mainstream media, or what Health Ranger Mike Adams calls the “fakestream media,” accepts everything from Big Pharma at face value.
Moreover, a movement appears to be underway for more states to require mandatory HPV vaccinations for pre-teens or teens. Against that backdrop, parents might be well advised to study the American College of Pediatricians statement and review the many articles here on the Natural News website to make an informed decision, along with their healthcare provider, as to what is best for their family.
Stay informed about medical science news from an independent source at Medicine.news.
Sources:
CircleofDocs.com
Acpeds.org
CDC.gov
NaturalNews.com
http://www.naturalnews.com/2017-01-17-american-college-of-pediatricians-hpv-vaccine-causes-ovarian-failure.html

» Committee to diagnose the causes of mass failure in the College of Rafidain
» An American official announces the date of launching the first dose of a test vaccine against the Co
» 13 Year-Old Boy Permanently Disabled from Chicken Pox Vaccine Wins His Case in Vaccine Court
» Vaccine Maker Admits on FDA Website That DTaP Vaccine Causes Autism
» Crow Attacks Plague Irish College:Students and faculty at a college in Ireland are wearily keeping a