'My job is to, first of all, represent the Bible' 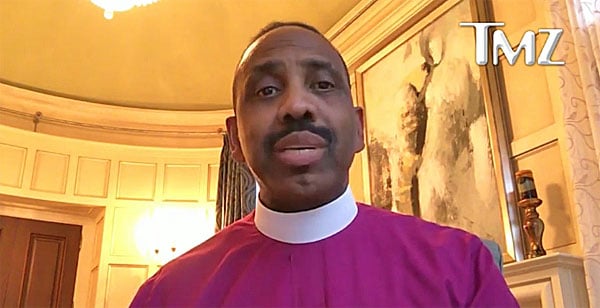 Bishop Wayne T. Jackson of Great Faith Ministries International in Detroit (TMZ video screenshot)
A Christian pastor who will be among the faith leaders at Friday’s inauguration of Donald Trump as the next president is being flooded with messages of “very strong” hate, but says he’s unfazed by the vicious comments.
“Some are very, very strong in their emotions about me doing this,” Bishop Wayne T. Jackson, who leads Great Faith Ministries International in Detroit, told TMZ. “I’ve been called a sell-out.”
“Anytime you’re in the forefront, you’re gonna be a target. But you gotta make sure that your convictions of why you’re doing it are pure,” he added.
Jackson, who will be doing the benediction during the inaugural, explained his purpose for being there:
“My job is a job to represent, first of all, the Bible, the followings and the teachings of Jesus Christ. It’s not about Democrats, it’s not about Republicans. It’s about making sure that I do what Jesus says. And that is that we’re supposed to love everyone. That’s the message Jesus brought. And my position as a minister to be asked to pray at the highest ceremony of our country – it gets no higher than that – I do what I do because I’m called to do it.”
“It’s two minutes, and we’re going to be praying for unity in our nation, praying for our president and also the vice president that God would give them wisdom to lead this country. It’s not over for America, America has a great future ahead of her.”
Watch video of Bishop Wayne T. Jackson’s remarks:
USE LINK -