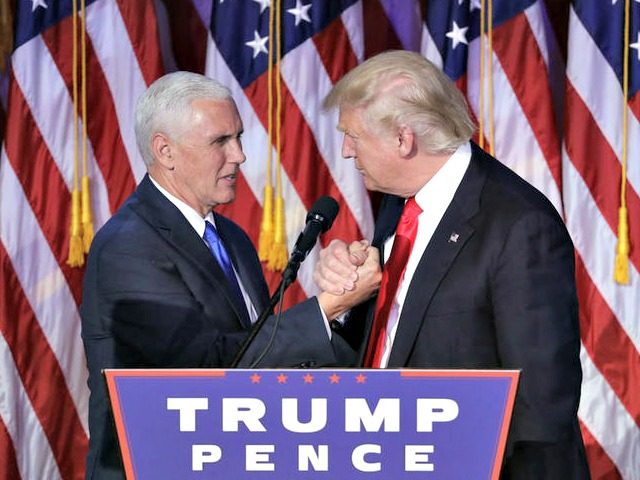 Vice President-elect Mike Pence touted that the President-elect officially filled his cabinet and did so under budget on Thursday, 24-hours ahead of Donald Trump’s official swearing-in ceremony.

“We’re wrapping up this transition on schedule and under budget,” Pence declared. “We will actually return some 20 percent of taxpayer funding.” Pence added that this is in keeping with Trump’s expectations going forward as President of the United States.
The Vice President-elect spoke preceding President-elect Donald Trump’s press secretary Sean Spicer on Thursday morning.
“I’ve ben very honored to serve as chair of the transition effort,” Pence told reporters, adding that the “credit goes to a great team.”
“The credit, I can tell you, goes to our President-elect,” Pence added, saying Trump’s energy is contagious and it drove the transition effort.
“We look forward to seeing you tomorrow. It will be a very humbling and moving day,” he added ahead of Friday’s inauguration. “We are all ready to go to work.”
Spicer spoke after Pence, telling reporters that Trump is continuing to edit his inaugural address for Friday’s speech.
Spicer added that Trump’s address will be a personal and sincere statement about his vision for the country.
It will be “less of an agenda” and more of a “vision of where he sees the country,” Spicer foreshadowed.
http://www.breitbart.com/big-government/2017/01/19/mike-pence-were-wrapping-up-this-transition-on-schedule-and-under-budget/

» Committee to prepare for the transition and establish a first sprinkled about the smooth transition
» Mike Pence endorses Ted Cruz
» Who Is Mike Pence? A Look at Trump’s Choice for VP
» House of Representatives held its afternoon schedule and on budget law only
» Mike Pence Releases Ten Years of Tax Returns