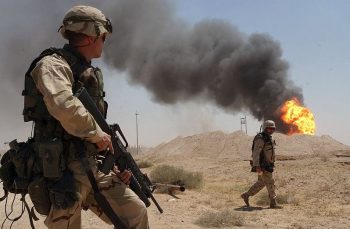 The Trump travel ban caused uproar. The left, ever ready to create outcry from any decision President Trump makes, were vociferous in their opposition. They screamed that denying refugees is inhumane, even if it is only a temporary suspension designed to allow security screens to be more effective.
Their biggest point of argument is that the U.S. hasn’t been attacked by native-born individuals from any of the seven countries in the ban. This is a fallacy on two points: the U.S. has been attacked, and, more importantly, the U.S. is not magically immune to attacks that have succeeded across Europe.
To drive this point home, we’re going to review the terrorist tally and thoroughly explain why the specific seven countries in the ban were chosen.
Al-Qaeda

After 2001, the U.S. went after Al-Qaeda with a vengeance, and there was success on many fronts. Their kill count has dropped significantly, but they are still active, and it is primarily because of the support and sanctuary they receive in Iran, Yemen, Somalia and Sudan. All four of the countries have active Al-Qaeda operating within their borders.
While the most famous Al-Qaeda attack doesn’t need rehashing, it’s worth noting their activity during the Obama administration. They have actively participated in combat in Somalia and Syria, even as recently as 2015.
More importantly, they have plotted and attempted attacks. In 2013, a major attack in Europe was foiled. The plan was to start massive fires, but the cell was detained before the attack commenced. The overall threat from Al-Qaeda is smaller than it was a decade ago, but if left unchecked, they are a determined group who will gladly kill again.
ISIS

As Al-Qaeda presence started to fade, the power vacuum was filled by ISIS. While the general population is aware that they are the leading terrorist threat to the U.S. and allies, the consensus from the left seems to be that ISIS hasn’t actually attacked American soil.
Whether born of ignorance or deception, this sentiment is flat-out wrong. A Syrian immigrant is tied to two ISIS attacks in the U.S. in the last two years, and both of the attacks left Americans dead.
While the detained individual did not carry out the attacks, he has been charged with conspiring with the perpetrators. In addition to that, a half dozen ISIS sponsored attacks have been foiled in the U.S. and Canada in the last two years alone.
That, of course, is only the beginning. To ignore the ISIS-lead terrorism that has plagued Europe and other U.S. allies since 2014 is ludicrous. Well over 90 percent of Syrian refugees have fled to Europe, and those refugees have perpetrated every major terrorist attack on the continent since.
Now, this isn’t an attempt to say that all refugees are terrorists. It only highlights how easily terrorists can infiltrate a country when hiding in refugee crowds. Some of the biggest attacks you might remember that have utilized this attack are the Belgium suicide bombers, the Tunisian mass shooting and the Paris attack. Many don’t realize that Australia has suffered three ISIS attacks and foiled a few more.
When everything is tallied, ISIS has killed more than 109 in terrorist attacks in Europe, Australia and North America in the past two years. Keep in mind that this number only counts attacks that are directly tied to refugees from countries with an ISIS presence.
We mentioned that the bulk of the killers came from Syria, but the ISIS presence in Iraq is not to be ignored. While none of the attacks mentioned originated in Iraq, the remaining terrorist threat in the country is enough to merit their inclusion in the Trump ban.
Libya

We’ve covered six of the seven so far, so now let’s talk about Libya. ISIS and Al-Qaeda ties to the country are not out of the question, but they also haven’t been fully substantiated. Instead, Libya is home to its very own terrorist organization, and it was put into power by the Obama administration.
The recent foreign intervention in the country gave rise to terrorism and recruitment in Libya, and their kill count is in the thousands. They have not established the global presence of ISIS, but Libya-led attacks into Europe have been foiled on numerous occasions so far.
Ultimately, the justification for the travel ban is pretty obvious. These seven countries have been identified by U.S. intelligence as the largest potential exports of terrorists. Whether they were responsible for an attack 16 years ago or not is irrelevant. What they did yesterday doesn’t matter. It is the threat that exists today and tomorrow that must be addressed, and the left has now made it clear that they prefer to see Americans die if it means they can oppose Trump just for the sake of opposition.
~ Conservative Zone
http://www.conservativezone.com/articles/tallying-terrorism-from-trump-banned-countries/

» 10 American Foods that are Banned in Other Countries
» Banned in Many Countries, But Still Legal in 29 U.S. States
» More countries' poultry banned in Iraq
» America is adding new countries to the list of those banned from entering the country
» Including Iraq. Eighteen countries are banned from Saudi Arabia