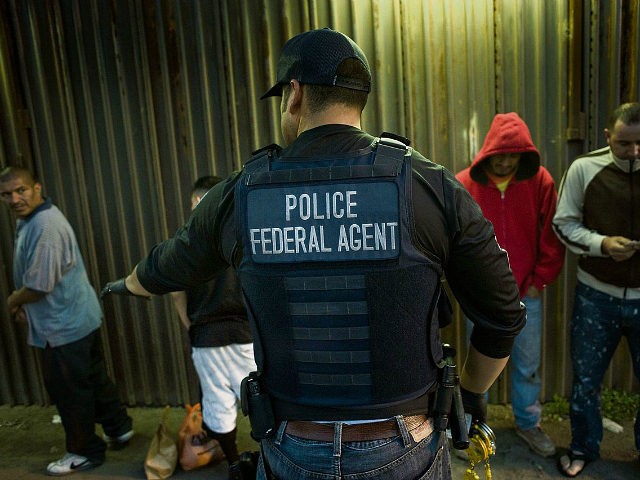 Department of Homeland Security spokesperson Gillian Christensen confirmed to the Washington Post that “routine” immigration enforcement actions were taken this week in Los Angeles, California; Atlanta, Georgia; and two other cities that were not identified. The enforcement actions took place at home and workplaces.
The spokesperson noted it was an unprecedented step to issue statements on such raids while they were ongoing, but fast-spreading social media commentary triggered the agency to comment in this case.
U.S. Immigration and Customs Enforcement (ICE) attested that 160 illegal aliens were arrested in the southern Californian region, including Los Angeles, according to NBC San Diego. The report stated that those with criminal histories and deportation orders were targeted over a five-day sweep.
The Post reported on Friday that federal immigration officials had declined to give numbers for how many arrests had been made. The report stated that “immigration activists” had documented “ICE raids” in at least six states as of Friday.
President pro Tempore of the California State Senate Kevin de Leon, who has defiantly announced the state would oppose President Donald Trump’s plans for the enforcement of immigration law, said in a statement issued Thursday:

There are reports that ICE today executed raids across Southern California. I have asked federal officials to disclose how many children, men, and women they have detained; what the processing time will be; what the rationale is for their detention; and I asked that everyone be offered access to an attorney.

De Leon announced an update on February 1 to his “California Values Act” bill that would effectively make California a sanctuary state.
Lawyers and advocates for illegal aliens were scrambling to secure lawyers for those impacted, Grassroots Leadership executive director Bob Libal told the Post: “We’re trying to do some legal triage.”
The majority of those detained in the immigration enforcement actions were males according to both federal immigration authorities and “activists” cited by the Post.
ICE spokesperson Virginia Kice echoed the DHS spokesperson when she told the Los Angeles Times that the immigration actions were “routine” and not part of any newly adopted policy under the Trump administration. Kice stated that the agency makes arrests every day: “Our operations are targeted and lead driven, prioritizing individuals who pose a risk to our communities. Examples would include known street gang members, child sex offenders, and deportable foreign nationals with significant drug trafficking convictions.”
Follow Michelle Moons on Twitter @MichelleDiana.
http://www.breitbart.com/california/2017/02/10/ice-arrests-160-california-enforcement/