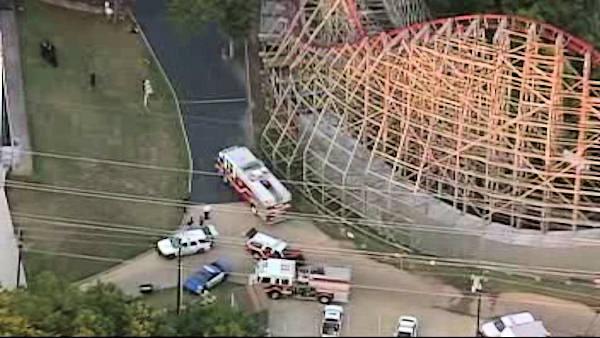 ARLINGTON, Texas (AP) — Investigators will try to determine if a woman who died while riding a roller coaster at a Six Flags amusement park in North Texas fell from the ride after some witnesses said she wasn't properly secured.
The accident happened just after 6:30 p.m. Friday at Six Flags Over Texas in Arlington. Park spokeswoman Sharon Parker confirmed that a woman died while riding the Texas Giant roller coaster — dubbed the tallest steel-hybrid coaster in the world — but did not specify how she was killed. Witnesses told local media outlets the woman fell.
"We are committed to determining the cause of this tragic accident and will utilize every resource throughout this process," Parker said in a statement Saturday. "It would be a disservice to the family to speculate regarding what transpired."
Arlington police Sgt. Christopher Cook, the department spokesman, referred all questions to Parker. Messages left for Parker by The Associated Press were not returned.
Carmen Brown told The Dallas Morning News that she was waiting in line to get on the ride when the accident happened and witnessed the woman being strapped in.
"She goes up like this. Then when it drops to come down, that's when it (the safety bar) released and she just tumbled," Brown, of Arlington, told the newspaper. "They didn't secure her right. One of the employees from the park — one of the ladies — she asked her to click her more than once, and they were like, 'As long you heard it click, you're OK.' Everybody else is like, 'Click, click, click.'
"Hers only clicked once. Hers was the only one that went down once, and she didn't feel safe, but they let her still get on the ride," Brown said.
Six Flags said the ride will be closed as the investigation continues, and a concert scheduled for Saturday was canceled.
The Texas Giant is 14 stories high, and has a drop of 79 degrees and a bank of 95 degrees. It can carry up to 24 riders. It first opened in 1990 as an all-wooden coaster but underwent a $10 million renovation to install steel-hybrid rails and reopened in 2011.
When the car that the woman had been riding in returned to the loading zone, two people got out and were visibly upset, Rockwell resident John Putman told the Fort Worth Star-Telegram.
"They were screaming, 'My mom! My mom! Let us out, we need to go get her!" Putman told the newspaper.
Also Friday, an Ohio amusement park's thrill ride malfunctioned when a boat accidentally rolled backward down a hill and flipped over in water, injuring all seven people on it. Operators stopped the Shoot the Rapids water ride after the accident, said officials with Cedar Point amusement park in Sandusky, Ohio.
Six Flags Over Texas opened in 1961 and was the first amusement park in the Six Flags system. It is 17 miles west of downtown Dallas. The park's first fatality happened in 1999. A 28-year-old Arkansas woman drowned and 10 other passengers were injured when a raft-like boat on the Roaring Rapids ride overturned in 2 to 3 feet of water.
There were 1,204 ride-related injuries reported in the United States in 2011 — about 4.3 for every million visitors — according to the National Safety Council's most recent data. Of those, 61 were deemed serious, the March 2013 report said, and roller coasters accounted for 405 injuries.
Fatalities were not listed in the report, which was prepared for Alexandria, Va.-based International Association of Amusement Parks and Attractions. Also, only 144 of the 383 amusement facilities with rides in the United States responded to the survey.
A 2005 report to the U.S. Consumer Product Safety Commission estimated just over four people died annually on amusement rides from 1987 to 2002. The estimate includes both mobile amusement park rides and fixed-site rides.

How very sad,your out having fun with family and friends,and then pulled into eternity all at once.Dear Lord help this family,and all who were there on that very,sad sad day.