The Penguins were going to trade for a defenseman at the deadline this year and they have. Today they acquired the services of Ron Hainsey

Pittsburgh is officially in the rental game again. They will spend a second round pick and an AHL depth player to add veteran depth to the blue line. He has a 2.8M salary. Pittsburgh will be responsible for half of that.

Ron Hainsey was signed by Jim Rutherford back in 2013 after the Joni Pitkanen ankle injury so he is definitely familiar with the player.

Here is a quick look at Hainsey 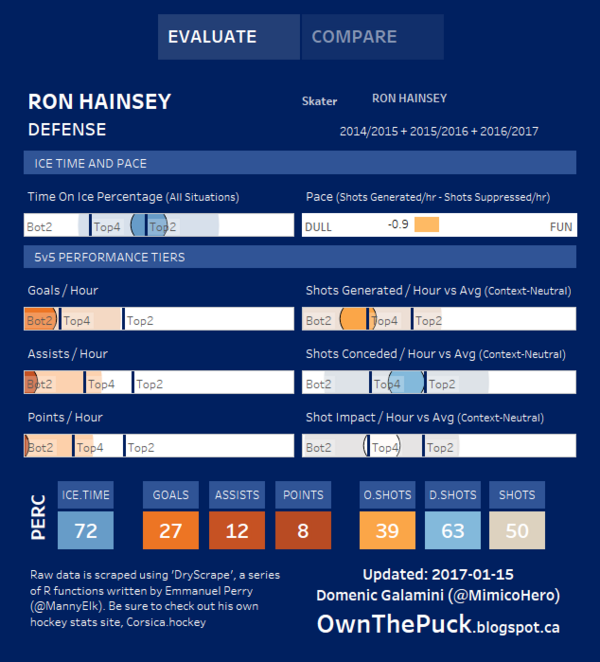 Don't expect any offense and more likely than not you'll get average possession.

Yesterday on 93.7 The Fan Jim Rutherford eluded to wanting a veteran presence that can kill penalties.

I'm looking for a #1 that can get a point a game and makes minimum salary. We're looking for defenseman that can come in and move up and down lineup. Maybe specialize in penalty killing and help us defensively. There are a couple guys out there on other end of spectrum that are offensive guys. If price was right, we'd take a look at them. I don't think we need to go that route and pay price. Try to get experienced defenseman that we feel can fit into chemistry of team and play in top 6.

I'd like add that extra depth on defense. That's an area we could use help with. The only defenseman we lost from last year was Lovejoy. I know at times he didn't get a lot of love from people, but he was a key part of our team. He was good defensively and could kill penalties. Hard to play against. We miss him a little bit.


It appears Rutherford was dead set on trying to find a Lovejoy replacement. Personally, I don't think chasing penalty killing ability is a great way to get value out of players. I'd rather focus on a player's ability at even-strength. Especially when you are playing in a league that is calling the fewest amount of penalties in decades. 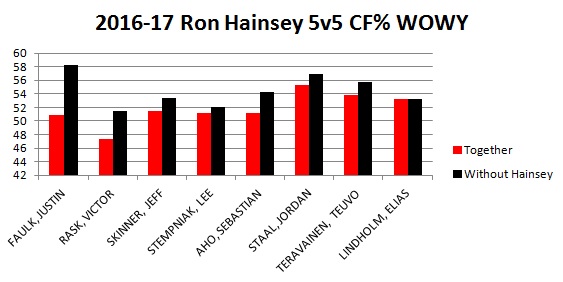 The thing that I am taking away from this information is that you need to keep Hainsey away from Kris Letang. You can clearly see that Hainsey was a negative impact on Justin Faulk. Hainsey just can't handle those types of minutes and the Hurricanes kept playing Faulk and Hainsey together. The Penguins won't have to do that because they will use Brian Dumoulin in that role. This should allow Hainsey a more appropriate 5v5 role than he was getting in Carolina.

Is this worth a second round pick? No, but the news on the injury front is definitely what caused this trade to happen


On a human level it stinks to see players hurt. These guys train incredibly hard and put everything they have into being NHL players. From strictly a hockey analysis standpoint the Penguins weren't going to miss Trevor Daley this year. He wasn't playing good at all. In fact nearly every Penguin played better away from him this year and in many cases significantly better.

Pittsburgh missing Justin Schultz is an issue. The good news is that Rutherford said yesterday that he may be ready for Saturday.

Losing Olli Maatta is a question mark because he has had positive samples from the past, but being paired with Daley has been a train wreck.

Losing Daley is a non-issue considering his caliber of play this year. If the Daley injury was the straw that broke the camel's back for a defense trade it didn't need to be.

I view this as an overpay for a bottom pairing defender, but it is something the team can absorb as long as they don't get into the habit of spending more futures for rentals. That was the Ray Shero path towards the end of his tenure and it wasn't a sustainable model. As we get farther away from Crosby and Malkin's pinnacle production years futures become more important. The team needs to be careful with how many they spend. Plugging holes at the deadline is a recipe for overspending and today's trade is no exception. Don't make it a regular thing.

Also, if Detroit moves Brendan Smith for a similar haul this trade will look worse. Smith is the better player and would have made more sense for Pittsburgh

If you were a fan of Ben Lovejoy today was a good day. The Penguins acquired the left handed version of him just as the GM set out to do.  [/size]