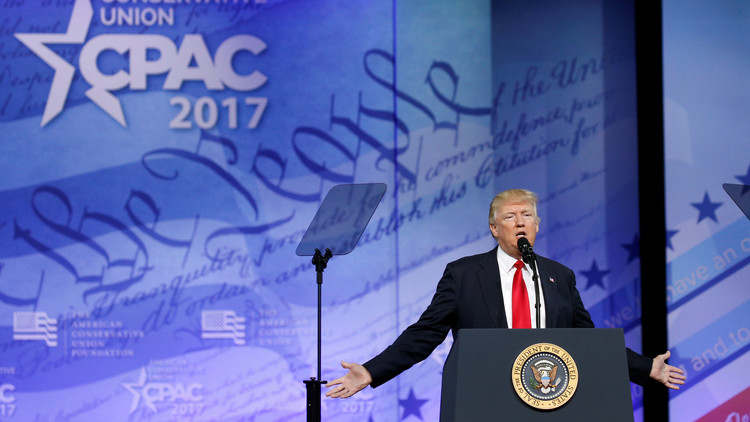 The US president promised again on Friday February 24, uprooted organization "Daesh" from its roots, stressing the need to prevent the infiltration of Islamic extremists to the United States.
Trump said in a speech to the annual conference of American conservatives: "Through cooperative work with our allies, Snqtal this evil (Daesh) from its roots."
The US president stressed that his administration will work to provide the necessary protection for the external borders in order to prevent terrorists from sneaking into the country.
According to Trump as witnessed in Germany, Sweden and France from terrorist attacks and the refugee crisis.
He said: "We have to be smart, and we must not allow the occurrence of such a thing to us."
Trump undertakes the largest promotion of American military force in history
President Bush announced that his administration intends to request "a huge budget" to achieve the "modernization of the armed forces fully."
He said: "No one should dare to question the military capabilities of the new", adding that he believes in preserving the peace by force.
The Trump signed, the end of January last, decreed the start of the reorganization of the US armed forces.
Trump: We will start construction of the wall on the border with Mexico before his planned schedule
Trump said: "We will start construction of the wall very soon, as soon as the schedule time .. Sentrd bad guys from here", without disclosing the exact date for the implementation of the project, which was the most important commitments during the election campaign.
Trump: false media enemy of the people and must fight it
Trump reiterated his criticism of the mainstream media in the United States, accusing him of fabricating news, and pointed to the channel "CNN" as an example.
He said: "I would like everyone to know that we are fighting false news. It's false and fake," stressing that those who publish "news" enemy of the American people.
He stressed that it is not for the media may quote the words of anonymous sources and published in their reports.
He said: "To talk to face to face! Not to unnamed sources!"
And directs the US president and his aides, regularly lately, accusations of American journalists to publish unreliable information. On February 17 th, said Trump through tweets in Twitter names a number of media pseudo namely: "New York Times" and channel "CNN" and "NBC" and "CBS" and "ABC" television, as the enemies of the American people.
Trump said that he intends to cancel the restrictions on the energy sector because most hinder the work of the various companies.
He concluded his speech by saying: "We have ended the era of empty rhetoric, and the time for action," and stressed that the work means implement the commitments it has taken on during the presidential race.
http://burathanews.com/arabic/international/312973

»  Parliamentary environment: pollution caused by operations Daesh will be serious on the ground and m
» Watched Fox, boy are they trying to get Trump to show up - so glad he is standing his ground and say
» Pope Francis, Trump to Seek Common Ground at Vatican...
» Cruz Puts Faith in Ground Game to Stop Trump in Indiana
» New drug to wipe out superbugs