The First 10 Foods That Disappear From Store Shelves During Disasters

The First 10 Foods That Disappear From Store Shelves During Disasters

The First 10 Foods That Disappear From Store Shelves During Disasters
Written by: Rich M Extreme Survival 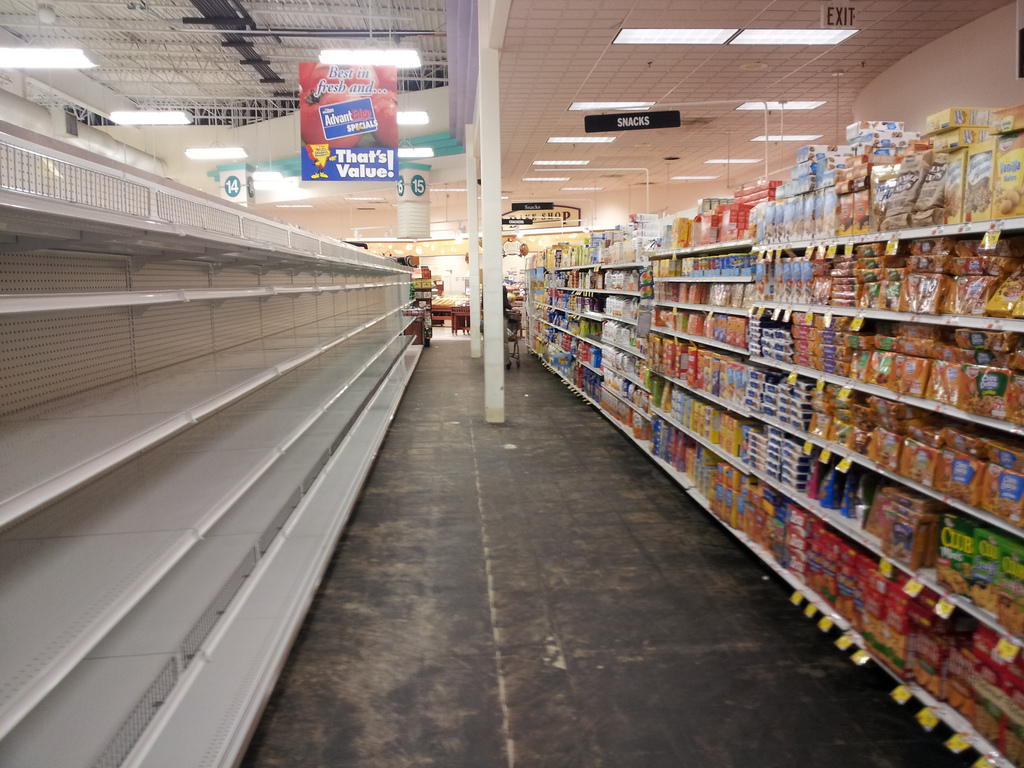 mage source: Flickr / Chris Waits / Creative Commonsf
I live in a hurricane zone. While we don’t get a lot of hurricanes that actually hit us, we do get a lot of threats from them.
So, I’ve seen how people react to them, time and time again. The funny thing is, the same people go to the store and buy the same things each time one is heading for us. They never seem to prepare or even improve upon their last-minute preparations.
Setting aside the lack of wisdom that goes with their decisions, there’s a huge problem with how they are approaching disaster preparedness. That is, they aren’t thinking ahead.
Their lack of planning explains, at least a little, the poor decisions that they make. When you’re in a hurry to make a decision, the natural tendency is to fall back on the things you know the best. That can be rather problematic, especially when you consider that the things which we would normally use when everything is going fine are not likely to be all that useful when the power is out. As we all know, whenever there is a disaster, especially a natural disaster, one of the things you can count on is for the lights to go out.
Knowing how people react, the local stores have made their own provisions. When a hurricane warning comes, you can see the local Walmart stores rolling out pallets of flashlights and batteries. Extra shipments of some food items come in, and emergency items are “stocked to the roof” in anticipation of extra sales. Even so, they still sell out of the same things every time.
Of course, the biggest thing that people are stocking up on is food. But, since they haven’t planned it out, they usually buy the wrong things. I’ve seen it over and over.
Here are the first 10 foods that tend to sell out in the stores when a disaster is imminent:

If you look at that list, you can spot a number of very important errors. First of all, the meat and frozen prepared foods require refrigeration. Likewise, bread won’t usually keep more than a few days without going bad. Yet, the one thing we can always count on is the power going out. So, what they are doing in buying those foods is either preparing for a feast or preparing to throw the food away.
On the other end of the scale, there are some things on that list that really make sense. Water is going to be the number one “food” need for most people, so stocking up on it is always a good idea. Unfortunately, the stores never have enough water and sell out of it quickly. Only the first 100 or so people to get there manage to buy water.
Soup, peanut butter and other canned goods are always good survival food — the types of things that most preppers stock up on. However, most last-minute shoppers don’t buy enough of them, so it won’t be long before they’re scrounging for food.
Finally, we find beer and alcohol rather high up on that list. Contrary to Maslow’s Hierarchy, most people put their vices before the basic needs for survival. This is especially true in times of crisis. Many people drink to forget their problems, and a disaster definitely qualifies as a problem. So, they’ll stock up on beer (and cigarettes too, but we’re talking about food here) to make sure that they have enough to keep themselves distracted from the destruction all around them.
http://www.offthegridnews.com/extreme-survival/the-first-10-foods-that-disappear-from-store-shelves-during-disasters/

» 37 Foods to Store: Essential Foods For Any Disaster
» We can’t keep the stuff on our shelves': Gun store owner describes rush on guns after Umpqua shootin
» The WHOLE TRUTH about Whole Foods:
» 9 Foods That Last Forever
» 5 of the Worst Foods for Your Liver