Posted by SRSrocco in News, Precious Metals on March 15, 2017 —
In just the past week, lawmakers in Idaho and Arizona have passed bills removing “Capital Gains Taxes” from gold and silver coins and bars.  Normally, when individuals sell gold or silver, they must pay capital gains on any increase on the value of their precious metals investments.  However, gold and silver are really not investments per say, rather they perform as real money. 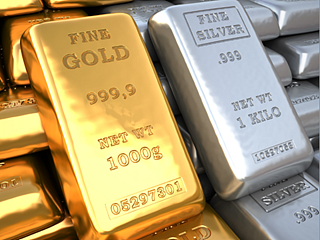 Thus, the lawmakers in Idaho and Arizona realize their citizens shouldn’t have to pay taxes on their gold and silver holdings because they have increased in value due to the debasement of the U.S. Dollar by loose Federal Reserve monetary policies.
According to the article, Arizona State Senate Committee Passes Bill To Treat Gold As Money, Remove Capital Gains Tax:

Today, an Arizona Senate Committee passed a bill that would eliminate state capital gains taxes on gold and silver specie, and encourage its use as currency. Final approval of the legislation would help undermine the Federal Reserve’s monopoly on money.
Former US Rep. Ron Paul testified today in the Senate Finance Committee in support of House Bill 2014 (HB2014). The legislation, which previously passed the state House by a 35-24 vote, would eliminate state capital gains taxes on income “derived from the exchange of one kind of legal tender for another kind of legal tender.” The bill defines legal tender as “a medium of exchange, including specie, that is authorized by the United States Constitution or Congress for the payment of debts, public charges, taxes and dues.” “Specie” means coins having precious metal content.
In effect, passage of the bill would, as Paul noted, “legalize competition in a Constitutional fashion.”

This Arizona House Bill to remove capital gains taxes on gold and silver is a BIG STEP forward to reintroduce precious metals back as their rightful role as REAL MONEY or HIGH QUALITY STORES OF VALUE.
While the Arizona State Senate Committee passed a bill last week to remove capital gains on gold and silver, Idaho did the same thing just yesterday.  According to the article, Idaho House Of Representatives Votes Overwhelmingly To Remove Income Taxation From Precious Metals:

Boise, Idaho (March 14, 2017) – By an overwhelming 56-13 margin, the Idaho House of Representatives today voted to end all Idaho taxation on precious metals, e.g. gold and silver coins and bars.
Bill sponsor Representative Mike Moyle (R) and the entire Republican caucus voted for the measure.  If the Republican-controlled Idaho Senate follows suit and Governor Butch Otter (R) signs the bill, Idaho citizens will better be able to use gold and silver as a form of savings which protects against ongoing devaluation of America’s currency.

So, we now have two states within the week that have passed bills removing capital gains tax on gold and silver.  However, Utah was the first state in 80 years to pass a bill back in 2011 that made gold and silver legal tender once again.  Thus, individuals in Utah are legal to use gold and silver coin to pay either taxes or for goods and services if both parties agree.
But, what is even more interesting is that Utah just recently (Jan 27th 2017) introduced a bill for a State Gold Depository.  The article, Utah Bill Sets Stage For State Gold Depository, Further Encourages The Use Of Metals As Money, stated the following:

A bill introduced in the Utah legislature would build on the state’s Legal Tender Act, creating a foundation for further action to encourage the use of gold and silver as money, and take another step toward breaking the Federal Reserve’s monopoly on money.
Rep. Ken Ivory (R-West Jordan) introduced House Bill 224 (HB224) on Jan. 27. The legislation would add several provisions to state law designed to encourage the use of gold and silver as legal tender. Passage would set the stage for expansion of gold repositories in the state and authorize further study on several sound money policies.
Specifically, HB224 would authorize the investment of public funds in specie legal tender held in a commercial specie repository.

Here we now have a third state encouraging gold and silver to be used a real money.  Not only does this bill help to reintroduce gold and silver as sound money, it also plans to set the stage for setting up depositories across the state to house its citizens precious metals holdings.  THIS IS A BIG DEAL.
While these are only three states pushing for gold and silver to be used as real money once again, I believe it is just setting the stage for more states to follow suit as the U.S. Dollar’s value continues to evaporate due to massive monetary printing and increased public debt.
So, as the Federal Reserve meets today to raise interest rates or the U.S. Government gets ready to increase the debt ceiling above $20 trillion, several states are preparing for a time when the U.S. Dollar is no longer is a viable form of money.
Americans better get prepared for what’s coming.  While the precious metals are still being valued in a manipulated highly leveraged gold and silver paper trading market, this is not a system that will last for much longer.  When the markets finally crack under the massive amount of Debt and Derivatives, there will be a mash rush of investors into gold and silver.
Unfortunately, when this occurs, there will be very little physical gold and silver to go around… only a MUCH HIGHER PRICES.
https://srsroccoreport.com/it-begins-idaho-arizona-pass-bills-to-remove-capital-gains-on-gold-silve
Ronbo

Need to do this with dinar as well, except include all 50 states...... after all, dinar isn't really an investment either, but rather money like gold and silver?
zimi31

By the way good to see you...
Ronbo

Did I leave my webcam on again?? OOPS, sorry!

Did I leave my webcam on again?? OOPS, sorry!