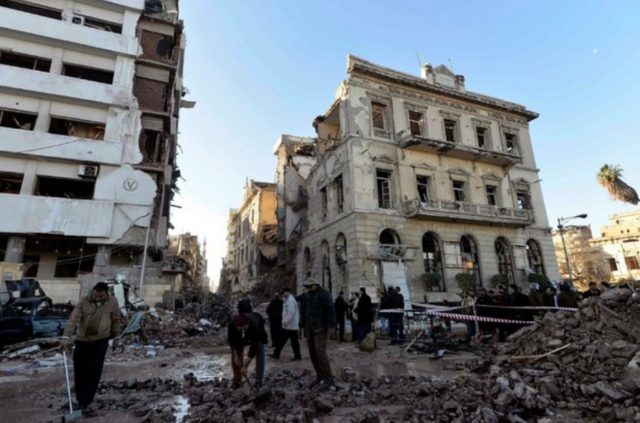 By Gordon Duff with Nahed al Husaini and Dr. Bassam Barakat
March 20, 2016 Damascus: Coalition F16s attacked the village of al Mansourah (Arabic Translation), hitting a building providing shelter for displaced persons from the Aleppo countryside.  143 civilians were killed and 250 seriously injured with as many as 500 more requiring treatment at the scene.
The building was hit with two laser guided bombs dropped from a US Air Force F16.  This story is blocked from publication.
Damascus
Friday evening, greatly reinforced terror groups, with fresh supplies of advanced arms from Israel and Qatar (based on interrogation of prisoners of war by the Ministry of Justice, Damascus), Damascus became a target.  The neighborhood of Jobar attempted to break the siege of the Syrian Arab Army.
Meanwhile, as many as 50 terrorist sharpshooters began targeting primarily military personnel inside the city itself, leading to several hours of chaos as special operations teams were deployed to deal with the threat.
Dozens (or more) were killed in Damascus.
It is believed that this two pronged attack is intended to support a combined Israeli, US and Jordan attack on Daraa, south of Damascus.  According to Russian sources in Damascus, Qatar and Saudi Arabia are financing this major escalation against Syria, led off by Israeli air attacks against Syrian forces which began a few days ago.
It is estimated that a force of as many as 30,000 can be deployed against Damascus with full support through Jordan from the US coalition and Israel.
Restricted Weapons Arrive in Syria
Syrian forces intercepted a shipment of Raytheon Corporation Stinger II missiles, with long enough range to threaten civil aviation, in shipping containers labeled for Qatar.

The missiles, restricted by secret convention from use in the Middle East, are a new high altitude FIM92 Block 2 variant stinger with advanced propellant.  These weapons may not be transferred to non NATO users based on their threat to civil aviation.
They are arms control restricted by conventions never made public.
Sources indicate that Qatar recently signed a $1.1 billion contract with Raython to provide an airborne early warning system.  In lieu of that system coming online, Qatar asked for Raython to illegally send these advanced missiles in order to defend Qatar from a possible air attack from Iran, we are told.
Qatar had the missiles transshipped directly to al Qaeda inside Syria.

»  A major crisis for the refugees in the world
»  Afghan refugees kills a child in Germany before police killed worsen
» Lavrov: Difficult situation in the Syrian Idlib, but work is continuing to stop the escalation
» Syrian forces re-take control of the zone to reduce the escalation with the support of Russian aviat
» Germany: 270,000 Syrian refugees reunited