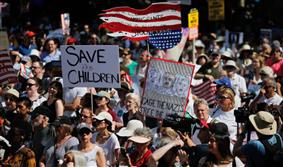 WASHINGTON (Reuters) - Six states have sued the federal government for federal immigration laws, according to US media.
"The six states, along with New York, are asking the federal government for more money to fight crime, rather than imposing further restrictions on migrants," the media reported.
"The federal court in Manhattan has been sued, on behalf of New York State as well as its city, as well as the states of Connecticut, New Jersey, Washington, Massachusetts, and Virginia," he said.
The six states seek to change the immigration policy adopted by the current US administration toward immigrants.
The state defense wrote in the court papers that the Justice Department was forcing states to accept illegal conditions that would reduce their ability to prioritize law enforcement and protect their population, without elaborating.
The administration's immigration laws face fierce opposition in Congress not only from Democrats but from some Republican members.
US President Donald Trump defended a "zero tolerance" policy of illegal immigration and called for the expulsion of all irregular migrants from the United States.
The United States has been embroiled in controversy over the White House's decision to separate the children of immigrants who cross the border illegally before Trump retreated on June 20.
http://www.aljournal.com/%D8%B3%D8%AA-%D9%88%D9%84%D8%A7%D9%8A%D8%A7%D8%AA-%D8%A3%D9%85%D9%8A%D8%B1%D9%83%D9%8A%D8%A9-%D8%AA%D9%82%D8%A7%D8%B6%D9%8A-%D8%A7%D9%84%D8%AD%D9%83%D9%88%D9%85%D8%A9-%D8%A7%D9%84%D9%81%D9%8A%D8%AF/