The Associated Press Migrants run as tear gas is thrown by U.S. Border Protection officers to the Mexican side of the border fence after they climbed the fence to get to San Diego, Calif., from Tijuana, Mexico, Tuesday, Jan. 1, 2019. Discouraged by the long wait to apply for asylum through official ports of entry, many migrants from recent caravans are choosing to cross the U.S. border wall and hand themselves in to border patrol agents. (AP Photo/Daniel Ochoa de Olza)
TIJUANA, Mexico — U.S. authorities fired tear gas into Mexico during the first hours of the new year to repel about 150 migrants who were trying to breach the border fence in Tijuana.

An Associated Press photographer witnessed at least three volleys of gas launched onto the Mexican side of the border near Tijuana's beach early Tuesday. It affected the migrants, including women and children, as well as members of the press.

Migrants who spoke with AP said they arrived last month with the caravan from Honduras.

U.S. Customs and Border Protection says in a statement that the gas was aimed at rock throwers on the Mexican side who prevented agents from helping children who were being passed over the concertina wire. The agency says 25 migrants were detained.

US security used tear gas against migrants on the Mexican border

US security used tear gas against migrants on the Mexican border 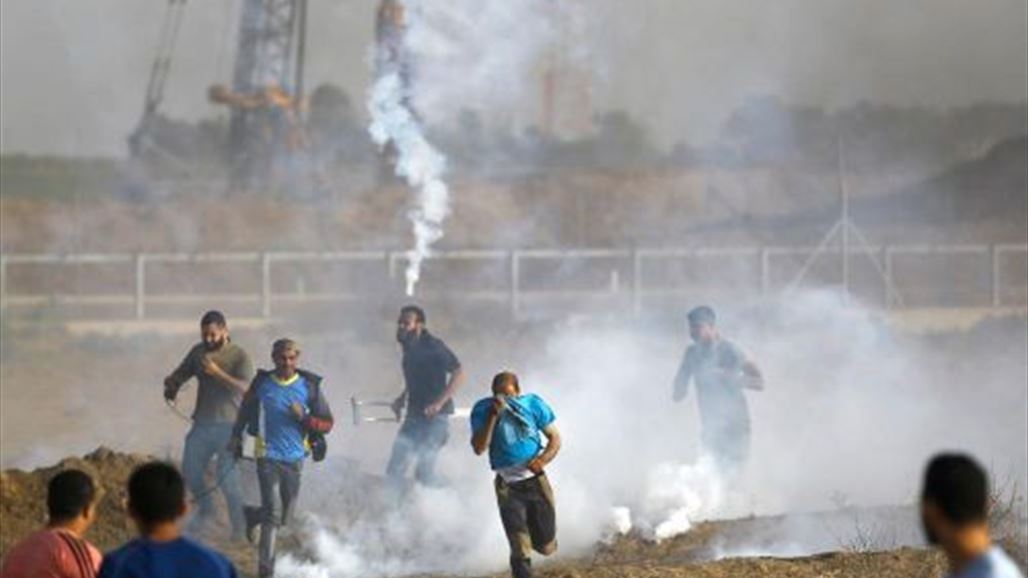 used US security tear gas on the borders of Mexico to prevent groups of immigrants from sneaking strongly to land the United States , according to " Associated Press ".

About 150 migrants tried to breach the barrier along the US-Mexico border near Tijuana, where the US authorities used at least three times to use tear gas to thwart their attempt, the agency said.

Women, children and journalists were among those affected by gas inhalation, the agency said.

Migrants told the agency they arrived at the border last month as part of a convoy from Honduras .

The US Customs and Border Patrol Authority said the gas was used against stone throwers who were obstructing staff in their efforts to help stranded children, adding that 25 migrants had been detained.

Since October 2018, large convoys of immigrants from Central American countries have traveled to the American border through the territory

Information / Baghdad ...
US border guards have fired tear gas at the border with Mexico to prevent a group of migrants from crossing the border into the United States.
"Smoke was seen rising from around the border fence in the border area of ​​Tijuana, while a migrant picked up a bomb and sent it across the border into American territory," the Reuters news agency reported.
"The Tijuana area has become a flashpoint in the debate over the US immigration policy, which has been exacerbated by the death of two immigrant children in US prisons and a partial closure of the US government as a result of President Donald Trump's demand that Congress allocate $ 5 billion to build a wall along the Mexican border."
A similar incident occurred last October when US forces fired tear gas at Mexico to disperse migrants, prompting Mexico to demand an investigation. A spokesman for the Mexican Foreign Ministry did not immediately respond to a request for comment. Ending / 25 z
https://www.almaalomah.com/2019/01/02/378822/
Sponsored content

Re: US fires tear gas across Mexico border to stop migrants

» US official: Those who wanted to boycott us lost the elections in Iraq

» Did the Sadrist movement nominated Tamimi and the League for prime minister?

» It is up to the commission.. Al-Kazemi's advisor resolves the controversy of the re-election

» Commission: 95% of the manual sorting of quarantined stations has been completed

» It includes a disciplinary committee to prevent extortion.. Expose the terms of the Doctors Law

» Allawi: 12% turnout in the Iraqi elections

» Complete counting and manual counting of all quarantined polling stations

» Iran.. Prison sentences for former officials of the Central Bank, including a governor of the bank

» A new jump in oil prices, and Brent touches the 85 dollars

» Iraq and Egypt agree to exchange experiences in this field

» Political Alliance: A loophole in the electoral law suggested the victory of 166 losing candidates

» Commission: Re-counting and manual counting is a legal matter..and this is what it needs

» The chief negotiator of the Sadrist explodes a surprise: The position of PM may go to a woman

» The Commission believes that the counting and sorting will continue until Sunday, and the results ma

» Electoral Commission: One step separates us from announcing the final results of the October poll

» Foreign Policy: Iran is the biggest loser in the recent Iraqi elections

» Fears of a new epidemic wave in Iraq after a jump in Iran... Will we witness the fourth wave?

» A year on the white paper and 4 more years ahead of it: pessimistic reports on the state of the econ

» Iraq's waste during 2020 is able to generate energy 22 times the current product!

» ELECTRICITY: WE ARE PROCEEDING WITH A NUMBER OF ELECTRICAL INTERCONNECTION PROJECTS WITH THREE COUNT

» The Sadrist movement announces it frankly: We will appoint the Prime Minister of Iraq

» Federal Service Council: job grades will be announced during the current month

» The elections strengthened Muqtada al-Sadr's position in Iraq, but negotiations with other powerful

» Conditions of life: addiction to life to ensure life, it is possible to leave at any time without wa

» What must Muqtada al-Sadr do to effectively govern Iraq? In the Financial Times

» Mazhar Muhammad Salih: / Nina / included a generation of journalists characterized by objectivity, i

» Al-Kazemi reveals the reason for not running for the elections

» Al-Kazemi’s advisor responds to the skeptics: the impossibility of rigging the elections and manipul

» Al-Sadr in his victory speech: It is the day of victory over the militias

» A source in the Electoral Commission reveals a change in the results that may topple independents: t

» The Sadrists to the skeptics: Your storm will end with a ministerial portfolio, and we will form the

» Al-Najjar reveals “one way” to finance infrastructure projects in Iraq

» A decline in the central bank's sales of hard currency

» Al-Kazemi’s advisor: The new Central Bank’s instructions regarding the sale of the dollar came to co

»  The Sadrists cling to naming the Prime Minister and a source in Al-Hanana: There is no alliance unt

»  1 billion dinars, the value of stock exchange trading during the past week

» Al-Kazemi meets Plasschaert and talks about the elections

» Oil: The gas sector in the world requires more investments

» 107 billion dinars, the value of the deficit in the amounts of social benefits

» World Food: Iraq is experiencing the worst drought in 40 years

» The international missions were not convinced by the participation rates.. the scenes of the postpon

» Al-Monitor: The victory of the independents will push them to ally themselves with those who share t

» In preparation for the series of alliances, strong leaders assign personalities to negotiate with po

» A government source: The statements of the Prime Minister's advisor on electoral security do not ref

» Al-Kazemi receives a message from King Abdullah.. This is what it contained

» Muqtada al-Sadr after sweeping the election results: The electoral machine did a great job

» In the document.. the names of the Sadr negotiating committee representing him in the parliamentary

» The caretaker government holds its session headed by Al-Kazemi

» Electricity reveals the contracting mechanism for the purchase of clean energy

» Al-Abadi: We demand the Electoral Commission to resolve the problems that have confused the general

» The Commission for the Euphrates News: We expect a major change in the election results

» Al-Kazemi’s advisor: International Monetary Fund’s expectations regarding the lack of demand for ene

» Including Iraq..OPEC oil production increased by 486 thousand barrels per day during last September

» Adviser to the Prime Minister: Unemployment decreased to 14% and an increase in the growth of domest

» The Minister of Oil from Russia: The importance of addressing the confusion in global markets and th