The President’s new budget has been unveiled.

There are lots of provisions that deserve detailed attention, but I always look first at the overall trends. Most specifically, I want to see what’s happening with the burden of government spending .

And you probably won’t be surprised to see that Obama isn’t imposing any fiscal restraint. He wants spending to increase more than twice as fast as needed to keep pace with inflation. 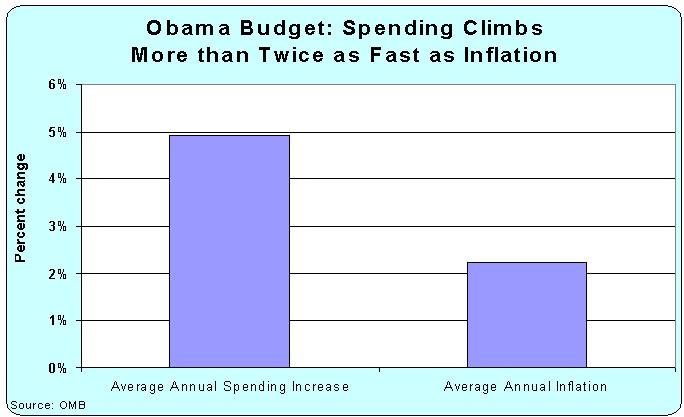 What makes these numbers so disappointing is that we learned last month that even a modest bit of spending discipline is all that’s needed to balance the budget.

By the way, you probably won’t be surprised to learn that the President also wants a $651 billion net tax hike.

That’s in addition to the big fiscal cliff tax hike from early last and the (thankfully small) tax increase in the Ryan-Murray budget that was approved late last year.

P.S. Since we’re talking about government spending, I may as well add some more bad news.

I’ve shared some really outrageous examples of government waste, but here’s a new example that has me foaming at the mouth. Government bureaucrats are flying in luxury and sticking taxpayers with big costs. Here are some of the odious details from the Washington Examiner.


What can $4,367 buy? For one NASA employee, it bought a business-class flight from Frankfurt, Germany, to Vienna, Austria. Coach-class fare for the same flight was $39. The federal government spent millions of dollars on thousands of upgraded flights for employees in 2012 and 2013, paying many times more for business and first-class seats than the same flights would have cost in coach or the government-contracted rate. …Agencies report their premium travel expenses to the General Services Administration each year. These reports were obtained by the Washington Examiner through Freedom of Information Act requests. …The most common reasons across agencies for such “premium” flights in 2012 and 2013 were medical necessities and flights with more than 14 hours of travel time.

By the way, “medical necessities” is a loophole that can be exploited. All too often, bureaucrats get excuses from their doctors saying that they have bad backs (or something similarly dodgy) and that they require extra seating space.

But I’m digressing. It’s sometimes hard to focus when there are so many examples of foolish government policy.

Let’s look at more examples of taxpayers getting ripped off.

Frankfurt to Cologne for $6851 and a domestic flight in Norway for $4668?!? Did these trips include caviar and a masseuse? Were the planes made of gold?

I do enough international travel to know that these prices are absurd, even if you somehow think bureaucrats should get business class travel (and they shouldn’t).

And as you might suspect, much of the travel was for wasteful boondoggles.


Department of the Interior employees, for example, flew to such exotic locations as Costa Rica, Denmark, Japan and South Africa in 2012. …The Department of Labor sent employees to places like Vietnam and the Philippines for “informational meetings,” conferences and site visits.

The one sliver of good news is that taxpayers didn’t get mistreated to the same extent last year as they did the previous year.

The moral of the story is that lowering overall budgets - as happened in 2013 - is the only effective way of reducing waste.

Re: Obama’s New Budget: Burden of Government Spending Rises More than Twice as Fast as Inflation

» Al-Sadr: Al-Maliki was tried and did not succeed and the experimenter is not tested and he must publ

» Economist: Restructuring Rafidain is part of the state's direction to activate the private sector

» Oil expert: Iraq will enter one billion dollars annually if the price of oil increases by one dollar

» Electricity: 87% of the completion rate of connecting Iraq to the electricity of the Gulf countries

» AL-RAFIDAIN ISSUES NEW INSTRUCTIONS REGARDING THE CONSTRUCTION AND RESTORATION LOAN

» Al-Sadr: I am not infallible

» The rise of the dollar for fear of raising interest rates

» Al-Kazemi’s advisor: Investment companies will provide services for residential lands within the “Da

» The Sadrist bloc holds its first meeting, these details

» “The Frame” .. an Iranian attempt to gather its lost allies in Iraq

» Will the energy agreements signed by Iraq be affected by the change of government?

» Sadrist bloc: We will take all legal steps to protect sovereignty

» A winning candidate in the elections talks about the shape of the next government: "a consensus in w

» Integrity: Recruiting the former Minister of Electricity and officials in the ministry

» The National Union: The position of the President of the Republic is our share

» IHEC: Appeals do not change the election results

» Without a guarantor.. Al-Rafidain grants 50 million as loans to employees

» The Minister of Wealth comments on the fuel crisis in Kurdistan

» Integrity: Recruiting the former Minister of Electricity and officials in the ministry against the b

» The Minister of Justice arrives in Tehran and reveals his agenda

» The Electoral Commission resolves in advance the Federal Court's decision on manual counting!

» Oil: We aim to achieve the highest financial revenues.. and pricing does not depend on daily variabl

» Governmental company: The Ministry of Commerce deliberately impedes the export of our products

» Oil prices are rising to their highest levels

» Iran allocates power stations to Iraq exclusively... and Baghdad: We will contract for only five yea

Yesterday at 9:23 am by chouchou