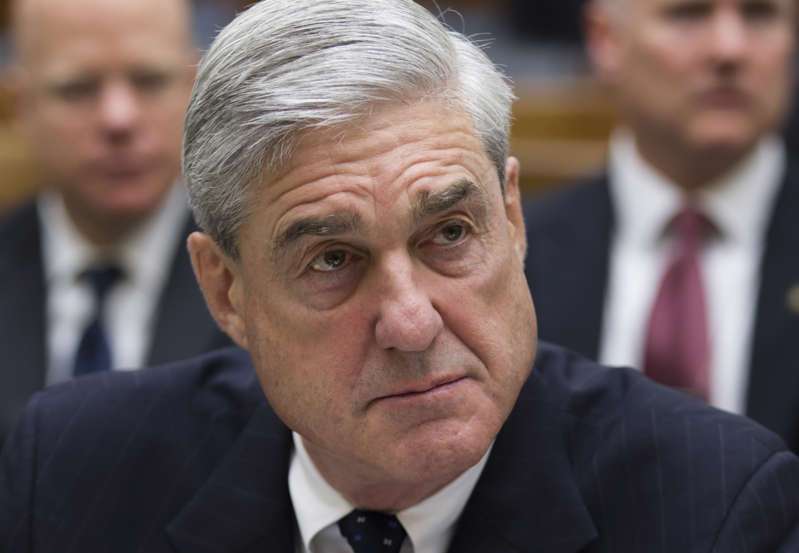 J. Scott Applewhite/ AP Photo In a photo from May 9, 2012, then-FBI Director Robert Mueller appears before the House Judiciary Committee on Capitol Hill. (AP Photo/J. Scott Applewhite) WASHINGTON — The wait for special counsel Robert Mueller's report on his investigation into President Donald Trump and Russia's campaign to influence the 2016 election ends on Thursday .

Attorney General William Barr will hold a press conference at 9:30 a.m. on the release of a redacted version of Mueller's report. Deputy Attorney General Rod Rosenstein, who appointed Mueller in 2017 and oversaw much of the special counsel's investigation until Barr was confirmed as attorney general in February, will also be at the press conference.


The report is expected to go to Congress between 11 a.m. and noon EDT and likely will be released to the public around the same time.

The sprawling investigation, begun in secret months before Trump was elected, did not find that the president or members of his campaign conspired with Russian efforts to sway the election in his favor, Barr wrote in a four-page letter to Congress summarizing Mueller's key findings. But Barr said the special counsel declined to draw a conclusion about whether Trump had sought to obstruct that inquiry.

What the full document says about the president, his campaign, and how he interacted with the investigation could shape the immediate future of Trump's presidency.

Investigators working for Mueller plumbed deeply into Trump's campaign and his administration, and charged six of his closest advisers with federal crimes. While the probe didn't find Trump himself committed a crime, the investigation almost certainly produced a large store of information about the Trump administration, not all of it flattering. The report is expected to detail the evidence Mueller's office gathered, and why it reached the conclusions it did.

There will likely be plenty for the public to unpack. Here are six key things to look for:

Links between Trump campaign and Russia

Barr said in his letter to lawmakers that Trump's campaign had received "multiple offers" of assistance from Russia-affiliated individuals, but he provided no details about what those offers were or what came of them. The report might describe the offers and how the Trump campaign responded.

Mueller's office detailed some of those contacts in court filings, including meetings between a young campaign aide, George Papadopoulos, and someone he thought was linked to the Russian government who boasted of having obtained "dirt" on Hillary Clinton. Months later, top campaign officials took a meeting at Trump Tower with a Russian lawyer claiming to have damaging information on Clinton. And Paul Manafort passed polling data to a business associate the FBI believed was linked to Russian intelligence while he was managing Trump's campaign.

Investigators have never revealed what they made of those contacts. Barr said the special counsel's investigation determined that they did not amount to a criminal conspiracy between Trump's campaign and the Kremlin. But what other conclusions, if any, did they draw about those encounters?

Barr wrote in his letter that Mueller and his team looked into "a number of actions" by Trump. He also wrote that "most" of these have been publicly reported, raising an obvious question about episodes that have not yet been revealed.

Barr wrote that instead of making a "traditional prosecutorial judgment," Mueller's report "sets out evidence on both sides of the question" on obstruction. This suggests the report could reveal evidence that may be good or bad for the president. More pointedly, Mueller wrote, as quoted by Barr, that the report "does not exonerate" Trump, raising questions about what actions the president took that did not rise to the level of a crime, but may, nevertheless, be concerning.

The report could explain why Mueller declined to draw a conclusion on obstruction. And it could reveal in far more detail what went on inside the White House during the special counsel investigation.

Apart from conversations between campaign aides and apparent Russian emissaries, one of the threads connecting Trump to Moscow was an effort by his company to build a high rise there.

Trump's former personal lawyer, Michael Cohen, pleaded guilty to misleading lawmakers about the timing of that project, saying it ended in early 2016 when it actually continued until Trump had virtually secured the Republican nomination. Cohen testified that he briefed Trump and some of his children about the project, which never went forward, even as Trump was publicly denying any business interests in Russia during the 2016 campaign.

Cohen later testified to Congress that Trump had encouraged him to lie to lawmakers about the project. He also said some of the president's lawyers reviewed and edited his false statements before he delivered them to Congress. The lawyers deny the accusations.

Mueller's report could shed light on how aggressively investigators dug into Trump's business dealings with Russia, and whether they believed Cohen's account of having been encouraged to lie.

Russian efforts to sway the election

Mueller had offered extensive evidence already about Russia's efforts to interfere in the 2016 election. Through indictments of several Russian nationals , Mueller and his team revealed details of phony social media campaigns meant to target Americans' deep political divisions, and hacking operations by a military intelligence service that targeted Clinton and other Democratic organizations. Prosecutors said Russian intelligence passed troves of stolen emails to the anti-secrecy group WikiLeaks, which published them at moments seemingly calculated to damage Clinton's campaign.

That evidence largely tracks with an assessment by U.S. intelligence agencies in early 2017 that the Russian government had attempted to intervene in the 2016 election, in part to help Trump win the White House.

The report could reveal more information about the breadth and purpose of Russia's efforts. And it could offer insights about when Trump's campaign learned the hacking operation, which Trump had repeatedly praised.

So many other mysteries

Almost every public development in the special counsel investigation has left unanswered questions.

Take Roger Stone . The Republican operative and longtime Trump adviser was charged with lying to Congress about the campaign's efforts to learn about the damaging material WikiLeaks had obtained. Mueller's prosecutors alleged that Stone told "senior Trump campaign officials" about stolen materials possessed by WikiLeaks and the publication of those records. They also alleged that a senior campaign official was "directed" to communicate with Stone. Mueller's report could provide more information about what prosecutors believe the campaign knew.

Who gave that direction? So far, prosecutors haven't said.

Former National Security Adviser Michael Flynn pleaded guilty to lying to FBI agents about his contacts with Russians during the transition before Trump took office, then agreed to cooperate with prosecutors. So far, none of them has said what information he provided to the special counsel, or why he lied in the first place.

And there are other questions, big and small: Who is the unnamed congressional candidate that allegedly sought hacked documents about an opponent in the 2016 election from Russian intelligence officers posing as an online activist? Who is the unnamed member of Congress  who, according to former Trump campaign aide Rick Gates, met with his former boss Manafort in 2013 as part of the pair's illicit lobbying in Ukraine? What, if any, will the report say about Carter Page , a former Trump campaign aide who was the target of secret surveillance in 2016 after the FBI said it had evidence that he was working with Moscow?

Mueller's report could finally provide answers to all of those questions. Or none.

Barr said the Justice Department will conceal information related to grand jury proceedings, which Mueller used extensively during his investigation, as well as material that could compromise intelligence sources and methods and infringe on personal privacy and interests of "peripheral" third parties.

The Justice Department also made clear in a court filing on Wednesday that it has redacted information related to pending criminal matters that resulted from Mueller's investigation. That includes the case against Stone.

The department, however, said that it plans "to make available for review" a less-redacted version of the report to "a limited number" of lawmakers and their staff. This version, which will not be available to the media and the public, will show information related to the charges against Stone, according to the filing.

» No agreement yet on vacant ministries

» Al-Kadhimi under pressure not to open corruption files

» Political analyst: The time is right to hit the corrupt and recover the money smuggled out

» Al-Abadi: We will face a problem with paying salaries next month, and printing currency is one of th

» An economist is surprised to continue wasting huge amounts of money through the currency auction, an

» report: the government is considering reducing the value of the dinar against foreign currencies

» Economist: Four laws were suspended by the governments, and if they came back, the Iraqi economy wou

» Planning plans to implement the customs tariff law, activate taxes and include them in the 2020 budg

» Hashd al-Sha’abi ready to respond to any possible US attack: Commander

» Why Iraqis fret over risk of Trump losing election

» Keep Your Enemies Closer: Iran and the U.S.-Iraq Strategic Dialogue

» What Message is Iraq’s New Prime Minister Sending to the Public?

» Iran is retreating from the Iraqi political scene

» Iraq’s new PM pledges to crush pro-Iran militias, so why is Tehran silent?

» Will Iraq's new government keep any of its promises?

» Khamenei reiterates call for US expulsion from Iraq, Syria

» Khashan: The prime minister does not have the vision to pull Iraq out of its crisis

» Deputy for Al-Fateh: The presence of American forces in Iraq prevents the independence of decisions

» For a month ... Kuwait and Saudi Arabia agree to stop production in the joint Khafji field

» The Baghdad and Erbil negotiations are back to square one: subsequent discussions complete the prece

» Parliamentary Finance: The fiscal deficit cannot be predicted and the 2020 budget will be austerity

» You will only find it in Iraq .. a hard currency that is wasted through the auction at a difficult t

» Low exchange rate of the dollar against the Iraqi dinar

» Basra deputy: 50 candidates compete for the oil portfolio ... competition will be limited to three

» Hamdoun: Addressing the financial and economic collapse in Iraq is linked to "intentions to reform"

» Al-Kadhimi storms the deep walls of the state

» Oil prices touch their highest levels in a month

» Al-Ziyadi for Mirbeed: The number of applicants to fill the Ministry of Oil portfolio reached 50 can

» Corona ... What is the truth about a dangerous strain entering Iraq via returnees from Europe?

» Faihan: There are American threats to target Khazali and crowd political and leadership figures

» Parliamentary Finance: The salaries and benefits of retirees and employees will not be affected

» Deputy: The new electoral law is “obstructed” and whoever legislates it does not agree with its mech

» Parliament calls to send the budget and complete the election law

» British report: Al-Kazemi has a proven track record of working with US intelligence ... and failed a

» Newspaper: Al-Kazemi intends to replace most of the heads of the 25 independent bodies

» International Alliance: No need for our forces to be in Iraq

» Parliamentary: Immediate directives must be issued to prevent those involved in the scandal of the B

» The appearance of Mohamed Saleh to / Nina:: internal or external borrowing begins immediately after

» Minister of Health: Increased dialysis to 5,000 and cases of infections started to increase