After the battle of Tripoli ... Libya's next crisis may be banking

After the battle of Tripoli ... Libya's next crisis may be banking

[size=32]After the battle of Tripoli ... Libya's next crisis may be banking 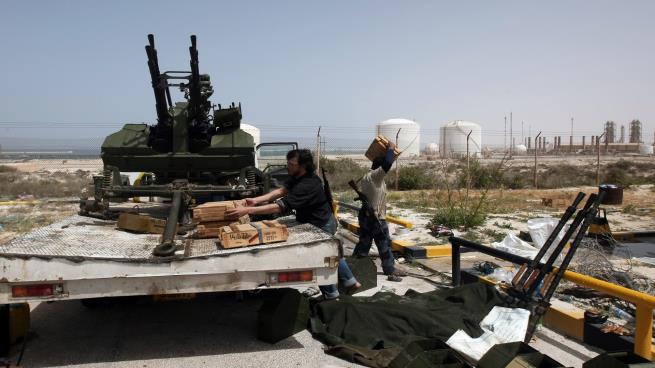 [size][size][url][/url][/size]
[/size]
The militias of the retired Libyan brigade Khalifa Hafter campaign to attack the capital Tripoli, but the result of the attack may be determined by a separate battle is the continuation of the parallel financial system to finance its soldiers.
Hafar has been the biggest military campaign in Libya since the ouster of Muammar Gaddafi in 2011 to visit Tripoli, the seat of the UN-backed government in Libya, from his stronghold in the east, where he has a parallel government and a branch of the central bank.
The military commander is funding Eastern Libya, according to a report by Reuters on Thursday from a combination of unofficial and cash money in Russia and deposits from banks in the east, bringing together debts of 35 billion Libyan dinars ($ 25.18 billion) outside the banking system the official.
But diplomats and banking sources say the sources of support may be on the way to depletion as the central bank in Tripoli, which controls the country's energy revenues, steps to curb the operations of banks in the east.
They have found it difficult in the last few months to meet the minimum deposit requirements, which could give Tripoli Central Bank, which is allied with the prime minister of Tripoli, Faiz al-Sarraj, a pretext to prevent its access to hard currency.
"A looming banking crisis could undermine the capacity of the authorities of eastern Libya to finance themselves in the near future," said Claudia Gatsini, Libya's senior analyst for the International Crisis Group.
"The crisis was already in place before the war broke out," she said. UN reports indicate that Haftar built the Libyan National Army with the help of the UAE and Egypt, which supplied him with heavy equipment, such as helicopters.
While military sources said that the commander of the seventeen resort to traders to import vehicles and other equipment using hard currency obtained by the banks of the East Trade Bank of Tripoli Central in the issuance of letters of credit.
Military sources and residents said there was no public data on the cost of the Hafar war, but sent more than 1,000 troops to the West as well as support personnel from drivers and doctors. And fuel is not a problem in light of not exceeding the cost of liter 0.15 dinars and provide the National Oil Corporation services to the entire country.
But the Libyan National Army is trying to control Tripoli, hundreds of vehicles go non-stop in convoys of Benghazi carrying anything, from soldiers to ammunition and food. In addition, Russian-made aircraft take off on two daily flights from Benghazi to Jafra in central Libya, its main support base. The seriously wounded soldiers are being flown to Tunisia.
The attack failed, prompting the Libyan National Army to pledge more troops. The financing of Hafar faces another potential problem. In November, the House of Representatives allied with Hafer approved a law establishing a military investment authority that would allow the Libyan national army to control sectors of the economy, including civilian activities, such as scrap metal, inspired by Egypt's involvement in economic activity.
The investment authority companies are exempt from taxes and import duties under the welfare state announced by Haftar, but analysts say they need banks to deal with overseas partners and expand their business. "If banks collapse, the welfare state announced by Hafter will face pressure," a Western diplomat said.
Analysts say the working banks also need the Hafar parallel government to pay salaries and service the support network of the Libyan National Army. The central bank in Tripoli covers some government salaries in eastern Libya, but not the soldiers' salaries used by Libya's national army after 2014 when the country split into two departments, one in the east and the other in the west.
Tripoli Central Bank has already ruled out three banks from the east of Libya's e-banking system to limit its operations. Diplomats and business sources said banks were still able to access hard currency through other banks, but in a new move could prevent the Central Bank of Tripoli to get it completely.
Tripoli's central bank has vowed to remain neutral in the crisis plaguing Libya, but diplomats say it is also helping Serraj agree to his plans to allocate some 2 billion Libyan dinars to his war effort.
A banking crisis is taking shape all over Libya, especially in the east, where three banks find it difficult to continue to deposit the required 20 percent of client funds in Tripoli Central Bank. These banks have paid more hard currency in the past few months, but have to balance their accounts.
"Its deposits with Tripoli Central Bank are below the minimum required by law," said Husni Bey, a leading business leader and owner of HP Group. This was confirmed by data obtained by Reuters.
Diplomats do not expect the governor of the Central Bank of Tripoli, Sadiq al-Kabeer, to close the banks of eastern Libya altogether as this could pose a threat to Western banks. The banks themselves operate in the West and the East with financial flows that are difficult to distinguish. But they fear that the longer the conflict lasts, the more difficult it will be to unify the two central banks and pay the debts.
BN said the debt of the West was 68 billion dinars, which brings the total deficit and public debt in Libya to 130 billion, including outstanding government obligations, such as social security. The most worrying thing for diplomats is that Hafer, who surprised world powers with his attack, may be trying to sell crude from oil fields and harbors away from the National Oil Corporation.
"If the attack fails, Huffer may do so as he feels encouraged by (US President Donald) Trump," a Western diplomat said. The White House said on Friday that Trump had informed Hafar by telephone that he recognized his "great role in fighting terrorism and securing Libya's oil resources," a comment that angered his opponents but inflamed the enthusiasm of Libyan National Army supporters.