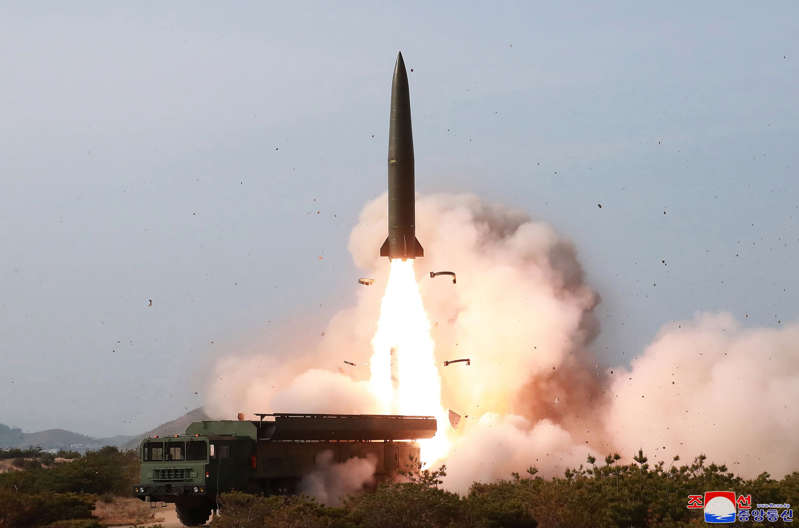 ASSOCIATED PRESS FILE - This Saturday, May 4, 2019, file photo provided by the North Korean government shows a test of weapon systems, in North Korea. North Korea’s test of what appears to be new short-range ballistic missile may not have been a direct threat to the United States, but experts warn it’s almost certainly an omen of bigger problems on the horizon. Independent journalists were not given access to cover the event depicted in this image distributed by the North Korean government. The content of this image is as provided and cannot be independently verified. Korean language watermark on image as provided by source reads: "KCNA" which is the abbreviation for Korean Central News Agency. (Korean Central News Agency/Korea News Service via AP, File) The U.S. Navy launched an unarmed ballistic missile off the coast of Florida on Thursday hours after North Korea fired two short-range missiles, its second weapons launch in five days.

Pentagon spokeswoman Laura Seal confirmed in a statement that the Navy’s Strategic Systems Programs launched an unarmed Trident II (D5) missile from the USS Rhode Island off the coast of Cape Canaveral, Fla., as a part of a Demonstration and Shakedown Operation.

While the exact range of the missiles is classified, it’s likely that it flew 7,000 miles, officials told Fox News.

Seal said that the test on the submerged ballistic missile submarine was conducted from the sea and that the missile flew over and landed in the water.


The Pentagon said that the test was a standard one for its missile system, and that the missile never flew over land.

The latest show of strength comes several hours after North Korea launched fired two suspected short-range missiles toward the sea, its second weapons launch in five days and a possible signal that stalled talks over its nuclear weapons program are in trouble.

South Korea's Joint Chiefs of Staff said the weapons flew 260 miles and 167 miles, respectively. The body is working with the United States to determine more details, such as the types of weapons that were fired.

The U.S. Air Force, meanwhile, tested a long-range missile from Vandenberg Air Force Base in California within 10 minutes of the reported launch by Pyongyang. The American intercontinental ballistic missile flew 4,200 miles into the Pacific from California, according to the Air Force. The launch of the Minuteman III intercontinental missile was the second missile launch this month and the fourth this year.

Speaking to reporters on Thursday at the White House, President Trump said he was not “happy” about the North’s recent military action, adding that “we’re looking” at the situation “very seriously right now.”


He said the weapons were smaller, short-range missiles, but added, "Nobody's happy about it."