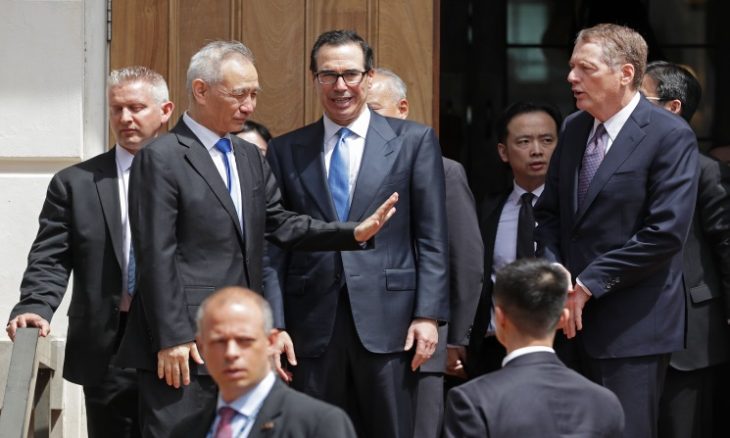 [size][size][url][/url][/size]
[/size]
BEIJING (Reuters) - Three points still raise differences between China and the United States in trade negotiations in Washington, but the two countries will continue their talks, though.
In response to a question from the Chinese media after two days of negotiations in the United States, Chinese chief negotiator Liu Hee spoke of "three points of contention" that still exist between the two parties.
Chinese and US negotiators wrapped up a new round of talks in Washington on Friday to try to reach an agreement at the height of a trade war between them, which was the exchange of customs duties on their exports.
"If we reach an agreement, the punitive tariffs must be withdrawn," Liu said. "This is the first point."
US President Donald Trump on Friday ordered an increase in customs duties on almost all Chinese imports, less than 24 hours after Washington raised tariffs on Chinese goods worth 200 billion dollars.
The measures are supposed to begin but will not take effect months ago.
Currently, more than $ 250 billion of Chinese imports are subject to punitive customs duties. The fees were raised Friday from 10 percent to 25 percent for $ 200 billion of these goods.
Trump and Chinese President Xi Jinping announced last December a truce in their trade dispute at the end of the G20 summit in Buenos Aires. Beijing has pledged to buy more US products, without specifying their value or size, to reduce the huge trade imbalance between the two countries.
"In the end, what is the figure?" Liu told reporters. He admitted that another dispute between the two countries "can not be changed quickly."
The third sticking point is the final text of a possible agreement. "It has to be balanced," Liu said.
The chief Chinese negotiator confirmed that the trade negotiations would continue in Beijing, however, at an unspecified date.
"The negotiations have not failed, and vice versa (the obstacles) are a natural development in the negotiations and this is a must," he said. "The two sides agreed to meet again in Beijing in the future and to continue pushing forward the negotiations," he said.

» Parliamentary Finance: We will not approve a new loan and lose 6 trillion of the previous amount

» Abtan: The Central Bank will forcibly reduce the exchange rate of the dinar against the dollar

» How to visit the Iraqi currency: revealing the secrets of its previously and current printing and “m

Yesterday at 9:39 am by Proven

» Sources: In the event of the closure of the US embassy, ​​there will be economic sanctions on the Ce

» "Finance" indicates the reason for the delay in September salaries. "Iraq is money-free"

» Saleh: The coming days will see a weakening of the purchasing power of the individual and the public

» Khamenei's Military Advisor: We Received Money In Dollars From Iraq

» English: Pompeo's deadline to Iraq to stop targeting the US embassy in Baghdad ends tomorrow

Yesterday at 4:21 am by chouchou

» Iraq to End Its Electricity Dependency on Iran

» A US. Spokesperson: the Iran-backed groups are a danger to the Government of Iraq

Yesterday at 4:10 am by chouchou

» Central Bank: The reform paper for the banking sector will start soon

» Top Iraqi diplomat in Iran after US Embassy warning

» Parliament speaker: US terrorist attack on Martyr Soleimani an insult to Iraqi gov't