Strait of Hormuz .. The most important oil artery in the world

Strait of Hormuz .. The most important oil artery in the world

[size=32]Strait of Hormuz .. The most important oil artery in the world 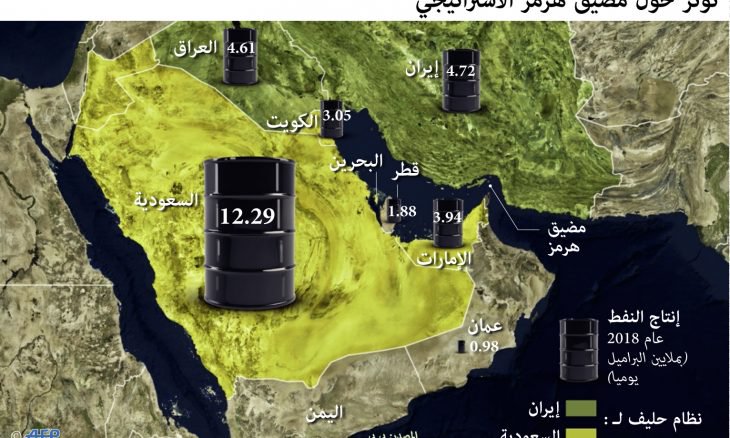 [size][size][url][/url][/size]
[/size]
The attack on two carriers on Thursday left more than 40 sailors south of the Strait of Hormuz, a key gateway to the world oil sector.
Here are some facts about the strait:
What is the Strait of Hormuz?
* It separates the waterway between Iran and Oman and links the Gulf with the Gulf of Oman and the Arabian Sea.
* The width of the strait is 33 km in the smallest part, but the navigational corridor does not exceed three kilometers in both directions.
* The UAE and Saudi Arabia have sought to find other ways to avoid the straits, including the extension of more oil pipelines.
What is its importance?
* About one-fifth of the world's oil production passes through the strait, about 17.4 million barrels per day, while consumption is about 100 million barrels per day in 2018.
* Most of the crude exports from Saudi Arabia, Iran, the United Arab Emirates, Kuwait and Iraq, All of which are members of the Organization of the Petroleum Exporting Countries (OPEC).
* Passes from the strait also each produce almost the diameter of liquefied natural gas. Qatar is the world's largest exporter.
* Political tension
* The United States imposed sanctions on Iran to stop its oil exports.
- Iran has threatened to disrupt shipments of oil through the Strait of Hormuz if the United States tries to stifle its economy.
* The US Fifth Fleet based in Bahrain is charged with protecting merchant ships in the region.
* Previous facts witnessed by the Strait of Hormuz
* Iraq and Iran during their war between 1980 and 1988 sought to block the oil exports of the other country in what was then known as the tanker war.
In July 1988, the American warship Vincennes dropped an Iranian aircraft, killing 290 people, all of them on board. Tehran said it was a deliberate attack in what Washington said was an incident in which the crew thought the aircraft was a fighter jet. The United States said Vincennes was in the area to protect neutral ships from Iranian naval strikes.
* In early 2008, the United States said that Iranian boats threatened its warships after approaching three US Navy vessels in the Straits.
In July 2010, Japan's M-Star oil tanker was attacked in the strait. A militant group known as the Abdullah Azzam Brigades, which are linked to al Qaeda, claimed responsibility for the attack.
* In January 2012, Iran threatened to close the Strait of Hormuz in response to US and European sanctions targeted its oil revenues in an attempt to stop Tehran's nuclear program.
* In May 2015, Iranian vessels fired shots at a Singapore-flagged tanker that Tehran said had destroyed an Iranian oil platform, prompting the carrier to flee. It also confiscated a container ship in the strait.
* In July 2018, Iranian President Hassan Rowhani hinted that his country could disrupt oil transit through the Strait of Hormuz in response to US calls to cut Iran's crude exports to zero.
* In May 2019 four ships were attacked, including two Saudi oil carriers off the coast of the UAE near Fujairah outside the Straits of Hormuz.
[size]