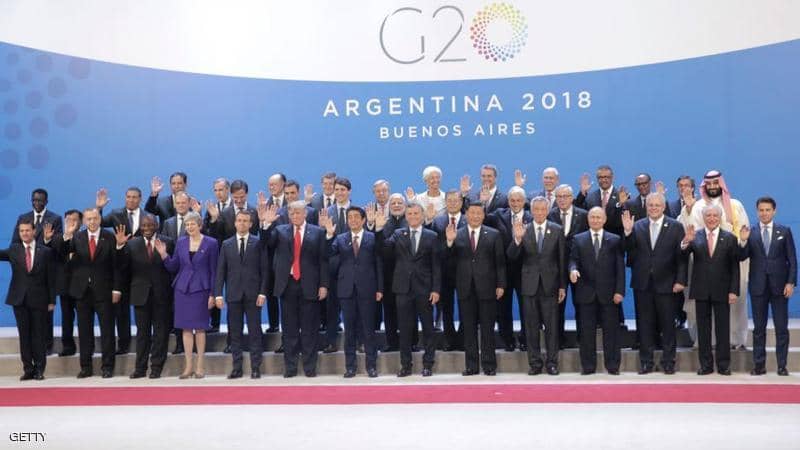 Continue to Mawazine News
This week, the 14th meeting of the G-20 summit will be hosted by the Japanese city of Osaka, attended by leaders of the world's largest economies.
The leaders of the 20 countries, the world's largest economies, will attend the summit, as well as leaders from other countries invited to the summit, as well as international and regional organizations.
The Summit agenda addresses a number of financial, economic and social issues, including energy, environment, climate, digital economy, trade, health care, education and employment.
The summit aims to "develop effective policies to achieve sustainable and balanced development, and create real jobs to raise standards of living and prosperity among the peoples of the world."
The summit this year comes at a time when the world is witnessing growing tension between the United States and Iran, while the participating countries will seek to calm the escalation.
The last summit was held in late November 2018, and was hosted by the Argentine capital Buenos Aires.
The idea of ​​creating the G-20 was formed in 1976, initially comprising only seven industrialized countries - France, Germany, Italy, Japan, Britain, the United States, and Canada. It was then known as the G7.
Russia later joined the group to become the G8.
In 1999, the G20 was established on the sidelines of the Group of Eight summit in Washington, with the aim of promoting international financial stability and creating opportunities for dialogue between industrialized countries and emerging countries.
The group includes 20 countries: the United States, Canada, Mexico, Brazil, Argentina, France, Britain, Germany, Italy, South Africa, Turkey, Saudi Arabia, Russia, China, Japan, South Korea, India, Indonesia, Australia and the European Union).
The G20 accounts for 66 percent of the world's population, 75 percent of international trade, 80 percent of global investment, and 85 percent of global GDP.

» The date and venue for the Trump and Kim Summit will be announced within 48 hours
» Before his participation in the Saudi summit .. Al-Kazemi to Iran within hours
» Hours before the Gulf summit .. Disclosure of the position of the Emir of Qatar to travel to Riyadh
» Iraqi summit - Saudi Arabia at the Arab summit in Jordan sidelines
» Parliamentary report: Hours of power supply will fall to 12 hours during the summer