VietNamNet Bridge – Fast-food giant McDonald’s plans to have a total of 4-5 restaurants in Vietnam this year as part of an ambitious goal for around 100 restaurants in the next decade, McDonald’s Vietnam said. 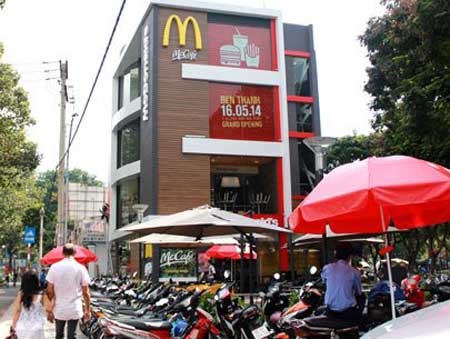 Nguyen Huy Thinh, managing director of McDonald’s Vietnam, told reporters in HCMC on Monday that McDonald’s would focus on the HCMC market before reaching out to Hanoi.

Nearly three months after the first eatery came into service at 2-6 Bis Dien Bien Phu Street in HCMC’s District 1, McDonald’s will inaugurate a second facility in the city this Friday at 2-2A Tran Hung Dao Street in District 1, adjacent to the landmark Ben Thanh Market.

The new three-storey restaurant, which is known as McDonald’s Ben Thanh, can serve 260 guests at a time, or 90 seats fewer than the first, McDonald’s Da Kao.

Instead of offering the drive-thru service, McDonald’s Ben Thanh has a To-Go booth allowing customers to place orders without having to step inside the restaurant.

McDonald’s Da Kao reportedly served 400,000 customers in the first month of operations. Thinh said that the exact number of guests in the first three months had not been updated but said that business results went beyond expectations.

Thinh said a majority of McDonald’s customers were young in the initial time but the number of senior guests and family members were on the rise. Big Mac was the favorite, he added.

McDonald’s currently buys vegetables grown in the Central Highlands city of Dalat and has to import other ingredients. Thinh said McDonald’s was looking for more local suppliers.

» Planning: We are waiting for financial allocations so that we can complete the census requirements

» Reuters: Qatar is in talks to acquire a stake in Total projects in Iraq

» Why did Barzani describe the Federal Court as the Revolutionary Court?

»  75 trillion dinars outside the banks .. How can it be used to reduce the value of the dollar?

» Central bank sales are down to 61 million dollars

» The President of the Republic: Plans to start strategic projects

» Customs: A committee to address errors in previous decisions

» Politicians: The Prime Minister's movements are trusted by all

» Three laws on the table of Parliament

» Al-Sudani: We hope for a sustainable partnership with France

» Amending the Roads and Bridges Law and other legislation for slums

» A new strategy to combat money laundering and industrial fraud

» New Karbala.. an investment project that has stopped since 2016

» Chinese and Indian companies lead the purchase of Iraqi oil

» Prices and inflation are worrying citizens

» “Breaking the pens.” The annual report on the conditions of press freedom in the Kurdistan Region -

» Sudanese advisor: The government intends to try a step that protects the Iraqi currency

» Representatives: A struggle is going on inside Parliament over the presidency of seven important com

» An American report: an official Iraqi desire for foreign forces to remain in the country

» The Ministry of Interior directs the implementation of plans for three governorates, which were rece

» Thousands of higher degrees... a way to "increase salaries" only

» Arrest warrants issued against a number of suspects.. Integrity: 4 cases of tampering with public mo

» Al-Azhar calls for a boycott of Dutch and Swedish products.. The incident of burning the Qur’an in S

» To prevent smuggling and drugs.. 8 regions between Iraq and Iran are included in the “red line”

» When she received the German Minister of State… Minister of Immigration: The government pays great a

» Kurdistan Regional Government: The Federal Court's decision is "unjust" and we call on the Sudanese

» Al-Khanjar expresses objection to the decision of the federation: Kurdistan is our people, and their

» Sudanese to France.. Reducing pressure and the fate of foreign forces is on the agenda

» Al-Karkh investigation: Nour Zuhair has so far paid about 400 billion dinars out of one trillion and

» Foreign Ministry reviews the objectives of the Sudanese visit to Paris

» With the document.. Assigning 4 new agents in the Ministry of Foreign Affairs

» "See your people and reduce the dollar." A demonstration begins in front of the Central Bank of Iraq

» Oil: Raising the rate of invested quantities from the Zubair oil field to 147 cubic meters

» Mandalawi receives the Ambassador of the Kingdom of Spain to Iraq

» Ministry of Oil: Start converting the work of daily wage workers into contracts

» With this value .. "Reuters": Qatar is moving to acquire the projects of a French company in Iraq

» A security delegation arrives in Kirkuk

» The dollar fell to its lowest level in 8 months

» Jordanian delegation to the Minister of Interior: We will convey the beautiful image of the generosi

» Economic: Approval of the budget will mitigate the effects of the dollar crisis