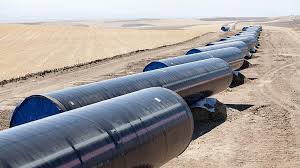 Follow-up - Mawazine News
The National Electric Power Company in Jordan, NEPCO, has announced the start of experimental pumping of natural gas imported from the American Noble Energy Company, which is pumped from the Israeli "Leviathan" field from next year.
The company said in a statement that the start of the experimental pumping of natural gas imported from Noble Energy Company, scheduled for the beginning of next year, comes in accordance with the obligations arising from the agreement signed in 2016 between the National Electricity Company (NEPCO) and the American Noble Energy Company, according to the Jordanian News Agency "Petra".
The company’s statement added that there will be a trial period of three months, stipulated in the agreement, before the daily start of receiving gas.
In September 2016, the Jordanian National Electricity Company signed an agreement to import natural gas from the Israeli Leviathan field in the eastern White Sea region.
The statement emphasized that the price of gas was determined in the agreement, where the price of imported natural gas is determined by linking the price to an equation in which the effect of Brent price change is marginal.
The agreement extends to 15 years, governed by a "ceiling of liability limits" on both parties, amounting to 1.5 billion dollars, which decreases with the age of the agreement, reaching 400 million on both sides of the agreement in the last 5 years of its life.
In its statement of orientation to this deal, (Al-Karaba National) explained that in its time, in-depth studies were prepared of the options available at the time. Natural gas to liquid, as is the case with imported gas by Shell International through the gas port in Aqaba. ”End 29 / p.
https://www.mawazin.net/Details.aspx?jimare=78443