[size=30]KTFA Members "News and Views with links" Wednesday PM 3-11-2020[/size]
KTFA:
DELTA:  FAMILY.........FROM SOCIAL MEDIA 15 MINUTES AGO
We call on the Iraqi Central Bank to be a plastic (polymer ) currency so that it is washable, sterilized and resistant to damage.
We hope that any new printing of the currency will be of this quality and be replaced over time 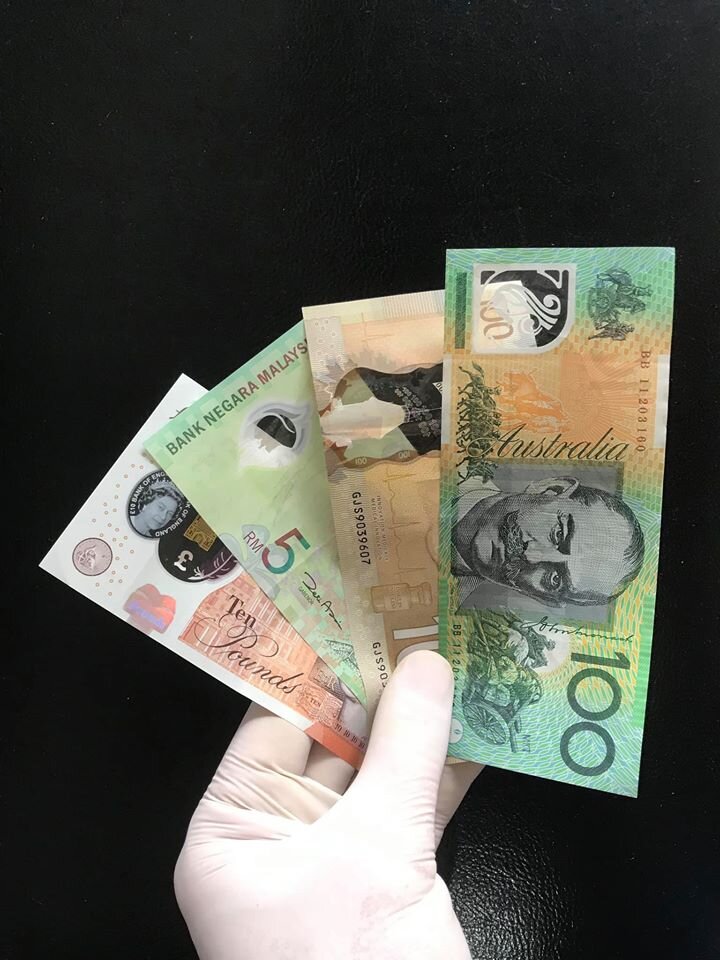 Sausy:  Thank you DELTA.. This should solve the "Corona" virus scare
Yooper75:  Washable???   Wouldn't that increase money laundering? ROTFL
Samson:  YEPPERS - I put one of my polymer $5 notes through a full cycle in my washing machine as a test a while ago - came out just as good as it went in - clean & fully intact
BlaqueBeauty:  are these the new LD’s?
Samson:  These are examples of polymer notes from other countries - this is what the citizens are calling for.  The one on the right (green one) is our $100 AUD (Australia)
*****************
Kenster:  IMO.... If everyone remembers when Kuwait Reinstated their currency, they had all kinds of confusion, the day before Kuwait RI. They told the world they would not RI for at least 6 months, then the next day BAM, I believe IMO
that These Knuckleheads are doing the same pattern as Kuwait. The boarders are closing on the 15th, not opening until the 21..... come on they think we are all crazy.....
Ask Frank and Delta MM and Walkingstick thought pattern. I am of the belief with these Gentlemen, The Perfect Storm.
Let the winds blow that Reinstatement On......Just My Humble Opinion!!!! Have a Great and Glorious Day!!!!
AndySwan43:  https://www.nytimes.com/1991/03/25/world/after-the-war-no-electricity-but-kuwait-reopens-its-banks.html
*************
Samson:  Economist: The dollar exchange rate will not be affected by the drop in oil prices
09:15 - 11/03/2020
The economic expert, Saleh Al-Hamash, confirmed on Wednesday that the exchange rate of the dollar in the Iraqi local market will not be affected by the present time due to the drop in oil prices, pointing out that the effect will be clear if the decline in oil prices continues for a year from today.
Al-Hamash said in a statement to the "information", that "currency prices are affected by the total output of the country, but in Iraq the central bank is trying to maintain the exchange rate of the dollar through the auction of selling the currency at 120 thousand to 100 dollars."
He added that "the exchange rate of the dollar, even if affected by the current crises, is back at the level of 120 thousand, but if the crisis continues for a long time up to a year from today, the effect will be evident on the exchange rate."
And that "the dollar exchange rate will be affected by the government's resort to the cash reserve for a long time, especially if this reserve is used to bridge the budget deficit", pointing out that "there are agreements with the International Monetary Fund to maintain the dollar exchange rate inside Iraq  ."
He explained that "Iraq has 65 billion dollars in strategic storage represented in dollars and gold in addition to the investment portfolio containing 3 billion dollars."
He pointed out that "gold prices rise with every variable or instability that occurs in the market, where investors and merchants resort to gold and real estate in order to preserve their money, so the increased demand for this mineral will raise its value in the market."   LINK
****************
Samson:  Merkel expects 60-70 percent of the German population to be infected with the Coruna virus
11th March, 2020
German Chancellor Angela Merkel announced that the federal government has launched a persistent campaign to combat the Corona virus, including calling for the cancellation of unnecessary activities. An additional € 1 billion has been announced to combat Corona.
German Chancellor Angela Merkel called for strict measures to be taken in the face of the emerging Corona virus (Covid 19).
Merkel said during a meeting of the parliamentary bloc of the Christian Union, on Tuesday, to which she belongs, in the German parliament "Bundestag" in the capital Berlin that all unnecessary activities should be canceled, according to participants told the German News Agency (dpa).
Merkel, 65, said shortly after the start of the parliamentary bloc meeting: 60 to 70 percent of people in Germany will be infected with the Coronavirus, i.e. (about 50 million people out of the country’s population of more than 82 million people), so there will be silence in the group Parliamentary, participants said.
Merkel added: Because of Coruna, we face a challenge that we did not face before, and now it really depends on us.  LINK

Samson:  The first vice president of Iran and a number of ministers were infected with the Corona virus
11/3/2020 17:53:14
The Fars news agency reported that the Iranian First Vice-President, Yitzhak Jahangiri, and a number of high-ranking officials have been infected with the new Corona virus.
The agency published a list containing the names of Iranian officials infected with the virus, most notably Jahangiri, the Iranian Minister of Industry and Trade, Reza Rahmani, and the Minister of Culture and Tourism Ali Asghar Monsan, in addition to other officials. The agency said that all the injured are now being quarantined.

Iran is one of the countries most affected by the new type of coronavirus, along with China, Italy and South Korea.
As of Wednesday, 9,000 cases of this strain, which hail from China and have been dubbed "COVID-2019", were reported in Iranian territory, including 354 deaths.  LINK
************
Don91:  American newspaper: Muhammad bin Salman ordered the dumping of oil markets in a phone call to his brother Thursday evening
Follow-up / Tomorrow Press:
The Wall Street Journal revealed today, Tuesday, that the Saudi crown prince ordered the dumping of world markets in oil Thursday night.
The newspaper said in a report seen by "Tomorrow Press" that "Saudi Crown Prince Mohammed bin Salman ordered the dumping of markets with oil in a telephone call to his brother Thursday evening."
Oil prices witnessed a great collapse that had not occurred since 1991, after OPEC Plus failed to reach an agreement   LINK
************
Iggy:  Exchange Rate Implications for Saudi Arabia’s Riyal – Will the Riyal Succumb to Increasing Pressure to Float?    https://www.americanexpress.com/us/foreign-exchange/articles/exchange-rate-implications-for-saudi-arabia-riyal/
************
Don961:  The United States postpones the sale of crude oil from the strategic reserve
Economie 2020-03-10 | 13:40
The US Energy Department said today, Tuesday, that it has delayed the sale of up to 12 million barrels of oil from the Strategic Petroleum Reserve due to a drop in the price of crude.
The Ministry had announced the sale of part of the oil reserve allocated for emergencies in late February, before the outbreak of the Coruna virus, and the lack of agreement by oil producers on the price of crude oil. It is worth noting that oil prices rose today by about 8% to recover from the loss recorded on Monday, as it recorded its worst daily performance in nearly 30 years.
This comes at a time when investors are looking for a possible economic stimulus in light of expectations of falling oil prices and a slowdown in new infections recorded by the Corona virus in China.
By 06:05 GMT, Brent crude contracts rose 8.3% to $ 37.21 a barrel, while US West Texas Intermediate crude contracts gained 7.9% to $ 33.59 a barrel. The benchmarks fell 25% yesterday, Monday, to their lowest levels since February 2016 and recorded the largest percentage decline in one day since January 17, 1991, when oil prices fell sharply at the outbreak of the second Gulf War.
The current decline came after Saudi Arabia and Russia failed on Friday to reach an agreement to cut oil production to support oil markets.   LINK [/size]

» Comment from Al-Kazemi's advisor on the recent central bank moves

» FOREIGN MINISTER: IRAQ IS NOT A BACK GARDEN FOR ANY COUNTRY

» An oil company talks about reducing gas flaring by 80%

» Iraq's foreign debt has decreased by 25% during the current year.. Iraq has paid about 11.5 billion

» Parliamentary Finance: Investment allocations in the budget are "shy and helpless"

» For the fifth day in a row, oil prices rise amid supply restrictions

» Former deputy: Parliament presidency is the worst since 2003

» Iraq closes one of its ports to the entry of Iranians

»  Hamid Al-Ghazi: The government has started preparing the 2022 budget

» Release the salaries of retired workers guaranteed with a bonus

» For the third day, the dollar exchange rates fell in the local markets

» 6 billion dollars.. Oil announces oil revenues for the past month

» For the year 2021..disclosure of the size of Iraq's foreign debt

» Sarout: The amnesty for the thieves of the smuggled money is not activated, and the parliament's wor

» Adviser to the Prime Minister: Electricity in Iraq has drained more than 120 billion dollars and is