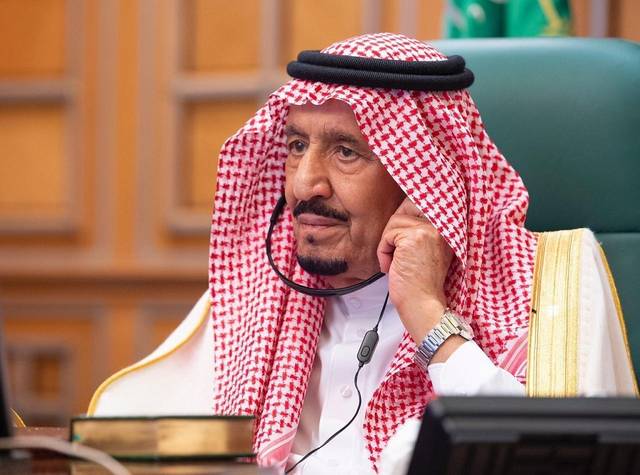 King Salman at the presidency of the extraordinary virtual summit of the Group of Twenty
March 26, 2020 5:52 PM
RIYADH - Mubasher: The leaders of the Group of Twenty agreed, in an exceptional meeting by virtual means, today, under the chairmanship of the Custodian of the Two Holy Mosques, King Salman bin Abdulaziz, to pump $ 5 trillion into the global economy, as part of financial policies, economic measures and targeted security plans to counter the social, economic and financial impacts of a pandemic. Sk.
In a closing statement, the leaders emphasized commitment to protecting lives, preserving individual jobs and incomes, restoring confidence, maintaining financial stability, reviving growth and supporting a strong pace of recovery, and reducing disturbances to trade and global supply chains.
The leaders said: "We are currently taking strong and immediate measures to support our economies, protect workers and companies, in particular the micro, small and medium enterprises - and the sectors most affected, in addition to protecting vulnerable groups by providing appropriate social protection."
The leaders affirmed a commitment to provide assistance to all countries in need of support, to coordinate public health and financial measures, as well as a commitment to maintain the protection of lives, jobs and income, and a commitment to restore confidence in the global economy and achieve growth .
They said that the scale and scope of this response will restore the global economy to its threshold, while laying strong foundations for job protection and recovery.
The leaders asked the finance ministers and central bankers to coordinate with them periodically to develop an action plan to respond to the Corona virus (Covid-19), in addition to working closely with international organizations to provide appropriate international financial assistance and urgently.
They stressed the support for the exceptional measures taken by the central banks in line with their tasks. As these banks worked to support the flow of credit to families and companies, enhance financial stability, and raise the level of liquidity in global markets. We also welcome the extension of the currency swap arrangements made by our central banks.
[ltr]


[/ltr]
The leaders supported the regulatory and supervisory measures taken to ensure the financial system continues to support the economy, and we welcome the coordination announced by the Financial Stability Board regarding these measures.
They welcomed the steps taken by the International Monetary Fund and the World Bank Group to support countries in need of assistance by using all tools to the maximum extent as part of a coordinated global response, and asked them to inform the Group of 20 periodically about the effects of this pandemic, and their response and recommendations to them.
The leaders said: "Addressing the health, economic and social impacts of the Corona pandemic is a priority for us ."
They emphasized taking the necessary measures to reduce the economic losses from the pandemic, calling on international organizations to clarify the impact of the pandemic on jobs.
They affirmed the continuation of providing broad and bold financial support, stressing that the collective measures of the Group of Twenty will work to amplify the impact of this support, and ensure its coherence, and benefit from the synergies between them.
“We task our senior officials to coordinate closely to support global efforts to counter the effects of the pandemic, including taking appropriate measures to manage borders in accordance with national regulations, and to provide assistance when needed to return citizens to their countries,” the leaders said.
They expressed deep concern about the grave risks facing all countries, especially developing and least developed countries, particularly in Africa and small island states, whose health systems and economies may be less able to adapt to this challenge, as well as about the risks faced by refugees and displaced persons.


Economy News _ Baghdad
The G20 leaders pledged to the major economies to pump more than $ 5 trillion into the global economy to reduce job losses and decrease in income due to the outbreak of the Coruna virus and "do everything possible to overcome this pandemic."
The leaders showed a unity that has surpassed any aspect of unity since the group was founded during the 2008-2009 financial crisis, and they said at the summit, which was held via closed-circuit television, that they were committed to taking and implementing all necessary health measures to limit the spread of the virus.
In their closing statement, they said, "The G20 is committed to doing everything possible to overcome this pandemic, in cooperation with the World Health Organization, the International Monetary Fund, the World Bank Group, the United Nations and other international organizations."
The statement carried a conciliatory tone that had been the group's most prominent on trade for years, as leaders pledged to "ensure the flow of vital medical supplies, essential agricultural products, and other goods and services across borders", as well as work to "tackle turmoil in global supply chains".
But the group refrained from calling for an end to the export embargo imposed by some countries on medical supplies, although leaders said there was a need "to coordinate responses associated with (international trade) so as to avoid unnecessary interference in movement and international trade".
The statement also said that the emergency measures aimed at protecting health will be "targeted, proportionate, transparent and temporary".
The group leaders expressed concern about the risks faced by “developing and least developed countries” especially in Africa and in refugee gatherings, and recognized the need to strengthen global financial security networks and local health systems.
Saudi Arabia, which currently chairs the group, called for an extraordinary summit via a television circle, in light of criticism of the group's slow response to the crisis of the Corona Virus outbreak, which has infected more than half a million people worldwide and killed about 24 thousand and is expected to lead to a global recession.
The Saudi monarch, King Salman, said in the opening speech that the group’s countries should focus on resuming the natural flow of goods and services, including vital medical supplies, as well as working to restore confidence in the global economy as soon as possible.
The group said it would "pump more than $ 5 trillion into the global economy, as part of financial policies, economic measures and targeted guarantee plans to counter the pandemic's social, economic and financial impacts."
The statement also said, "We welcome the steps taken by the International Monetary Fund and the World Bank Group to support countries in need of assistance by using all tools to the maximum extent."
http://economy-news.net/content.php?id=19476