Omicron mutant blows up a scheme for the World Trade Organization

Omicron mutant blows up a scheme for the World Trade Organization 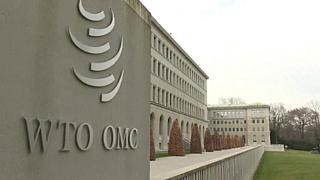 Follow - Mawazine News
On Friday, the World Trade Organization postponed, at the last minute, its first ministerial conference in four years, due to the emergence of the troubling "Omicron" mutant, thwarting hopes of relaunching the organization's work.
After an emergency meeting on Friday, the 164 members of the World Trade Organization agreed to postpone the twelfth ministerial conference "indefinitely" in the wake of the spread of the "Omicron" mutant, which prompted many governments to impose severe travel restrictions, which will prevent many ministers From heading to Geneva," the organization said.
"This does not mean that negotiations should stop ," said WHO Director-General Ngozi Okonjo-Iweala. On the contrary.
” Annabel Gonzalez, WTO Deputy Director-General, said on Twitter that the ministerial meeting was “postponed and all members supported the decision.”
"It was the right decision," Gonzalez added.
4,000 people were supposed to attend the WTO conference, from November 30 to December 3.
This ministerial conference was initially scheduled to be held in Kazakhstan in June 2020, but was postponed after the first cases of Covid appeared at the end of 2019.
After a period of relative decline in the pandemic in recent months in Europe, the World Trade Organization decided to hold the ministerial meeting in Geneva. But the fifth wave of the virus that the world is witnessing, and the emergence of the new mutant "Omicron", dashed hopes that it could be contracted.
"The postponement of the meeting has just been confirmed," a diplomatic source told AFP, shortly after Switzerland announced travel measures in an attempt to deal with the emergence of the new mutant.
According to the World Trade Organization, Okonjo-Iweala told diplomats that an online meeting could not allow for "complex negotiations on politically sensitive issues".
The European ambassador to the World Trade Organization, Joao Aguiar Machado, acknowledged that the decision to postpone the meeting "was not an easy choice, but it is the right decision."
Many observers considered it difficult for the 164 WTO members to be able to conclude major agreements during this 12th WTO Ministerial, particularly on fishing and the issue of intellectual property rights during the pandemic. But many still hoped that this meeting would at least break the deadlock in the discussions.
"The ministerial conference offers the possibility of finding political solutions to issues that cannot be solved by technical solutions alone," said Dmitriy Grozubinsky, director of the Geneva Trade Platform.
The World Trade Organization is the first international organization in Geneva to bear the consequences of the emergence of the mutant "Omicron", which was initially detected in the Republic of South Africa, and was classified by the World Health Organization as "worrisome" a few hours before the postponement of the Ministerial Meeting of the Trade Organization.
According to the European Union's health agency, the new mutation represents a "high to very high" risk for Europe.
Attention now turns to the World Health Organization, whose 194 members are due to discuss a pandemic treaty next week. Ended 29/b 88

» From the demonstration grounds to the Fifth Parliament... 3 years full of radical changes

» The Federal Court is going through a new “constitutional” test

» Al-Araji: Iraq is looking forward to achieving security and health cooperation with Italy

» Al-Fateh: The rule of law cannot be excluded from alliances, and the formation of the new government

» Saleh tweets about the Al-Azeem massacre in Diyala: Attempts to revive terrorism in the region canno

» After the great breach, a deputy demands a comprehensive review of security plans and the launch of

» The truth about the Faw port, the Silk Road, and the 450 billion dollars... Rami Jawad

» Economist: Al-Kazemi’s Government Is Not Authorized To Spend From The Financial Surplus

» State Of Law: We Will Not Pass The 2022 Budget Without Reducing The Price Of The Dollar

» Analyst: America Is Interfering To Impose A Government That Guarantees Its Interests In Iraq

» “Made in Lebanon” on the land of Baghdad

» Iraq is among the countries most vulnerable to economic production losses

» Al-Adari tweets about the appeal in the first session: Because she was Iraqi par excellence

» The KDP is not afraid of repeating the 2018 scenario: Zebari will pass easily

» Blackshart discusses with Barzani the political situation in Iraq

» Foreign Minister: Iraq looks forward to holding a meeting of the Cooperation Council with the Europe

» Mawazine News Foundation honors the Governor of the Central Bank

» The truth about the Faw port, the Silk Road, and the 450 billion dollars... Rami Jawad

» OIL: $9 BILLION, THE COST OF THE IRAQI OIL PIPELINE TO JORDAN

» Report: America Is Trying To Steal The Frozen Iranian Money To Compensate Its Injured Soldiers In Ir

» An Economist Denies The “Fiscal Deficit” Novel: A Fake Created By The Government

» Al-Moussawi: We Reject These Figures As Tools Of The Normalization Project In Iraq

» Abdul Latif: The Federation Is Obliged To Issue Its Decision During The Next Session

» 26 Iraqis have submitted nomination papers for the presidency of Iraq

» Within 48 hours.. Al-Titare and Al-Sadr meet in the presence of Al-Maliki at the last chance meeting

» In the last few metres.. the framework pushes al-Sadr to a "compromise government" that would likely

»  Coordination framework: Three names of the prime minister in the hands of al-Sadr are on a short li

» Iranian Foreign Minister: Iraq will host a new round of negotiations with Saudi Arabia

» During an emergency session... the Ministerial Council for National Security issues a package of dec

»  A source in the current: naming the Prime Minister in the hands of al-Sadr "exclusively" and announ

» Health insurance.. the date of its application and the percentage of deduction from employee salarie

» Karbala industrialists in the parliament office: We reject the cabinet’s decision to lift the ban on

» The Iraqi government will start distributing employee salaries next week

» Demonstrations condemning the leaders of the Shiite framework in Baghdad, demanding the trial of al-

» The Iraqi government marks the "biggest challenge" to the country's economy

» Lebanese Minister of Industry: Mikati will visit Baghdad at the head of a ministerial delegation

» Finance launches employee salaries financing for the month of January

» A representative for Al-Fateh: Discussions and mediations between the coordination framework and the

» The Central Bank reassures employees about their salaries

» The Central Bank: an unprecedented rise in foreign reserves

» Dollar prices recorded a slight decline in the local markets

» Economist: Talking about layoffs is a realistic outcome of the white paper submitted by the governme