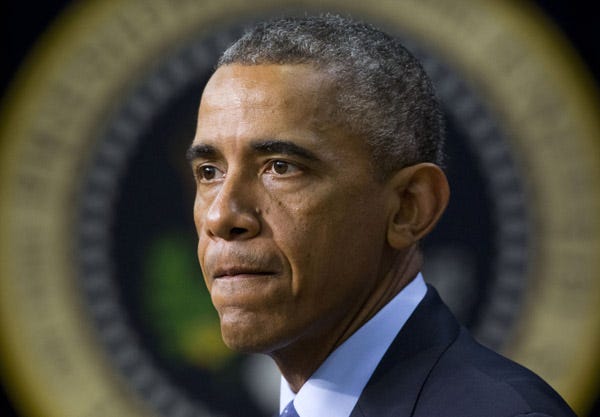 Battered by crises and maligned by critics, globalization is regaining momentum. And this is good news for America’s global leadership.
Negotiations for an ambitious Trans-Pacific Partnership (TPP) trade deal involving a dozen countries from Asia and the Americas are quietly nearing the finishing line. Another historic agreement, the Trans-Atlantic Trade and Investment Partnership (TTIP) between the United States and the European Union, also shows signs of becoming a reality.
Not long ago, the idea that two landmark U.S.-centered trade deals could be the pillars of President Obama’s foreign policy legacy would have seemed laughable. As a presidential candidate in 2008, Obama was a trade skeptic, painting deals like NAFTA as job-killers, which played well with unions weary of import surges from China.
Once in office, however, Obama warmed to trade expansion as presidents tend to do, given the dependence of the American economy and jobs on exports and global supply chains. In 2010, Obama issued a call to double U.S. exports, with trade deals forming part of the package–only now they were described as “partnerships” that would open new markets to American businesses big and small, rather than “free trade agreements” associated, even if falsely, in the public’s mind with offshoring and job losses.
While big business spearheads the trade lobby, “Main Street” small businesses stand to gain from greater access to foreign markets and the harmonizing of product standards and regulations across borders.
As an economist who has for years worked to advance free trade in both the public and private sector, I could not be more elated by the prospect that these major deals now look achievable. For more than a decade, ambitious global efforts to liberalize cross-border trade and investment had stalled.

Kevin Lamarque/ReutersU.S. President Barack Obama (C) meets with the leaders of the Trans-Pacific Partnership (TPP) countries in Beijing November 10, 2014.
The promise of the Uruguay Round of negotiations, which in 1994 produced the crown jewel of the global trading system, the World Trade Organization, appeared to have been lost. The Doha Round–the multilateral talks that were supposed to expand on the Uruguay Round’s gains–have been going on for 13 years, with few tangible results because of disagreements between emerging markets such as Brazil and India (who resist opening their markets to foreign manufactured products and services) and the U.S. and Europe, which are reluctant to free their agricultural markets.
With any one of the WTO’s 160 member nations able to scuttle any global agreement, countries have turned to regional trade agreements or country-to-country pacts as alternatives. Since the United States, Canada, and Mexico launched the North American Free Trade Agreement (NAFTA) two decades ago, no fewer than 400 trade deals have been concluded or are under negotiation, coupling such players as Chile and China, Japan and Mexico, and the United States and Singapore, to name a few.
Such deals are easier to get done than a universal WTO deal. They also tend to go deeper than WTO efforts, pioneering in the regulation of such matters as e-commerce, intellectual property, and state-owned enterprises. But for globalizing companies, they also create tremendous new complexity–a patchwork of rules and standards that differ from one market to the next.
The two trans-oceanic pacts that would link us to Asia and Europe, though, would resurrect the momentum for a more comprehensive global agreement. They would also deliver considerable economic benefits. The Trans-Pacific deal (TPP) will boost U.S. annual gains by $77 billion, and Japan’s by $104 billion. The TTIP deal, by integrating markets in the U.S. and the EU, would generate $130 billion annually in economic gains for the United States, and $162 billion for Europe. 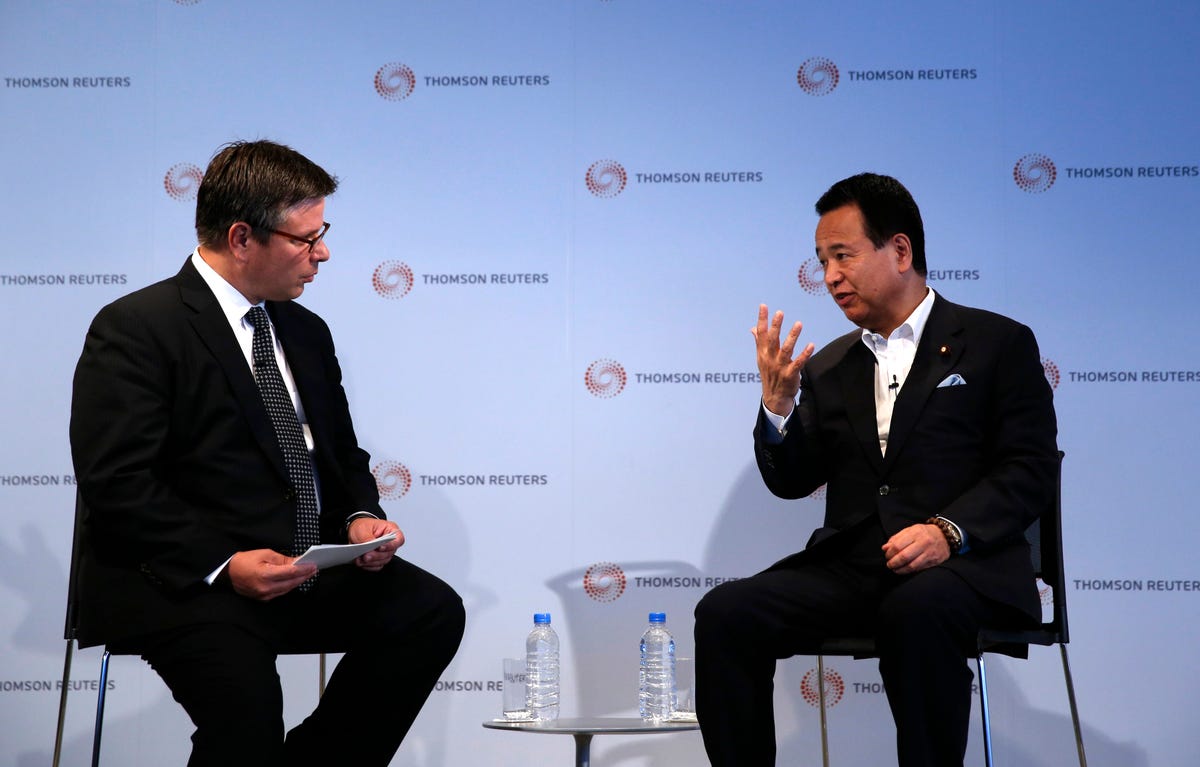 Toru Hanai/Reutersapan's Economics Minister Akira Amari (R) talks with Reuters Japan Bureau Chief Kevin Krolick in Tokyo July 11, 2014.
As such, it is estimated that TTIP will boost U.S. household incomes by $865 annually and create 750,000 new U.S. jobs, while TPP would generate about $1,230 per household by 2025–a great boost without a dime of deficit spending, and a strong bonus on top of the $10,000 annual income gains American households have [url=http://www.hks.harvard.edu/fs/rlawrence/Final Report.pdf]already scored due to post-war trade opening[/url].
These trade deals, by locking in deeper access for American interests in overseas markets, could give U.S. companies the confidence needed to unlock their considerable cash holdings and invest in the production of more export goods and the hiring of more U.S. workers. While big business spearheads the trade lobby, “Main Street” small businesses stand to gain from greater access to foreign markets and the harmonizing of product standards and regulations across borders.
These new trans-oceanic deals, if achieved, would also make it costlier for nations who have opposed lowering barriers to stay their obstructionist course. The most cantankerous player in the global trading system, India, risks being left out. Ever pragmatic, China has become interested in joining TPP, in part as a means of counteracting the country’s economic slowdown and driving reforms of inefficient state-owned enterprises.
In our hemisphere, Brazil has not been interested in joining trade agreements, seeking leadership instead of its own dysfunctional Mercosur alternative. Its strategy stands in stark contrast to that of Mexico, which has forged free trade deals with partners covering some 90 percent of its trade, such as North America, the EU, and Japan. 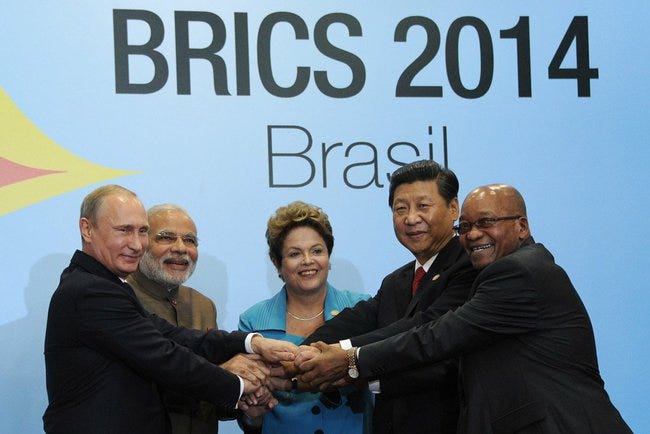 WikimediaLeaders of the BRIC countries — Brazil, Russia, India and China — meet at the BRICS summit in Brazil.
As a result, Mexico has emerged as a global manufacturing hub and anchor of Latin America’s Pacific Alliance bloc, which includes the more market-oriented nations of Colombia, Peru, and Chile. Brazil’s industrial lobbies, once champions of protectionist policies, now worry about the effect of high tariffs and about being left out of global supply chains, and have broken with the government to call for a reset of the nation’s trade policy
With the Ukraine crisis, the Israeli-Palestine imbroglio, and our messy departure from Iraq and Afghanistan all stunting Obama’s foreign policy achievements, the once stalemated issue of trade expansion now looks far more doable and desirable on the Obama administration’s menu of possible legacy options.
To be sure, the White House is facing complicated talks with Congress over the trade promotion authority (TPA) needed to successfully negotiate a trade deal and get it through Congress. Such a legislative license to jumpstart globalization will likely be opposed, much like the recent budget agreement was in Washington, by both the left wing of the Democratic Party and the Tea Party right within the Republican Party.
This may be yet another reason that a trade legacy looks appealing to President Obama: It will take a purple coalition to do the right thing.

» TRADE EXPRESSES ITS DESIRE TO TRANSFORM THE CENTRAL MARKETS INTO MALLS
» Industry: unintended factors stopped the factories must be a strategy to transform the economy to an
»  Trade: On the verge of a quantum leap in the ration card and one basket systems
»  Al-Kazemi: The economy was on the verge of collapse, and the government managed to cross the challe
» US sanctions economy cripples Iranian deals