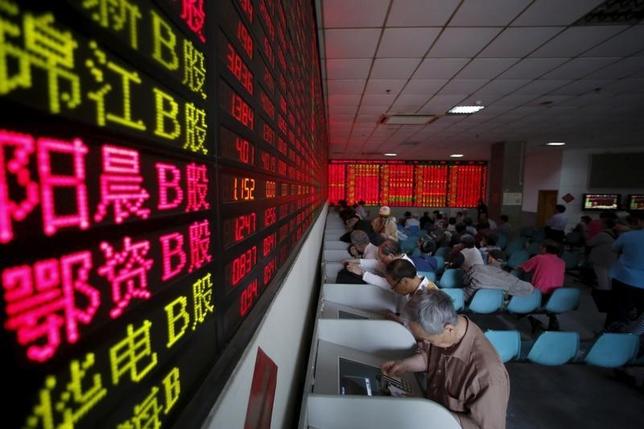 
China stocks fell sharply again on Thursday, fighting off fresh moves by regulators to restore confidence and raising questions about how much more firepower Beijing can bring to bear before a full-scale panic sets in.

Shanghai's benchmark share index crashed below 4,000 points for the first time since April - a key support level that analysts said had been seen as a line in the sand that Beijing had to defend, below which more conservative investors would start ejecting from their leveraged positions, widening the rout.

Chinese markets, which had risen as much as 110 percent from November to a peak in June, have collapsed at an incredibly rapid pace in since June 12, losing more than 20 percent in jaw-dropping volatility as money surges in and out of the market.

SCROLL DOWN
That drop has wiped out nearly $3 trillion in market capitalization, more than the GDP of Brazil.

In the latest move to arrest the slide, China's securities regulator late on Wednesday relaxed rules on using borrowed money to speculate on stock markets, letting brokerages set their own tolerance level on margin calls and allowing the roll-over of margin lending contracts.

"I think this is the right dose of medicine," said Hong Hao, chief strategist with BOCOM International. "The recent slump was largely driven by margin calls, so if brokerages don't force liquidation ... the market slide should be stemmed, at least for now."

But there was no immediate relief, with the CSI300 index of the largest listed companies in Shanghai and Shenzhen dropping 3.4 percent, while the Shanghai Composite Index lost 3.5 percent, to 3,912.77 points.

Beijing has been struggling since the weekend to find a policy formula that would restore confidence, such as easing monetary policy, suggesting more pension funds would invest in stocks and other administrative tweaks, including the latest relaxations of restrictions on margin trading. [ID:nL3N0ZI1PZ]

But the resistance of China's army of retail investors - who still dominate Chinese markets - to Beijing's blandishments makes it difficult to forecast when the market might find a bottom, as policymakers are running out of good options.

"The government has more tools it could use to support equities, but these moves could be short-lived if investors remain negative," wrote Oliver Barron of NSBO in a research note, mentioning rumors of IPO suspensions or outright buying of stocks by state-owned vehicles.

He also suggested higher level officials might have to make comments of support.

"Retail investors account for about 85 percent of turnover, and the recent correction has greatly endangered their belief in the capital market opening-up and reform, and might even cause social unrest."

The presence of leverage in the market is a wild card factor that has made it difficult to convince investors to wait out recent fluctuations.

Both retail investors and many corporates appear to have borrowed heavily to reap quick stock market gains, and they are now seeking to reduce their exposure to further declines.

Postings on Chinese financial microblogs underlined the souring mood among the retail investors who drive the market.

"The credibility of the government is in danger!" wrote one poster, signing themselves ChuHan De Yi Tian.

"The weak macro environment and the high stock bubble makes the interest rate cut meaningless!" wrote another, using the name Beiji Tu Tu Tu. "I am done with the stock market."

Today at 8:06 am by Stevethebrit

» Kurdistan: Talking about Allawi's independence is incorrect and no decision regarding our participat

» A deputy is likely to amend the cabinet of Muhammad Allawi, Ministerial

» Panic and anger in Iraq .. After the high prices of supplies to prevent Corona virus