John Kerry brokered the nuclear deal with Iran, but now he's being blasted as "delusional," full of "self-love" and is "is an order of fries short of a Happy Meal."
image: http://www.wnd.com/files/2015/07/john-kerry-headphones-600.jpg 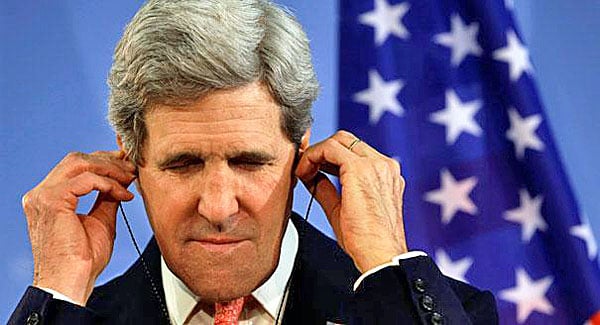 The scathing description came Tuesday from talk-radio host Rush Limbaugh who ripped Kerry’s apparent reaction of surprise to Iranian comments hostile to America despite the nuclear deal Kerry personally brokered with Tehran.
“I don’t have any doubt that what I’m telling you is true,” Limbaugh said on his national broadcast. “I really do believe that John Kerry is an order of fries short of a Happy Meal. I don’t think the elevator goes to the penthouse level. I think there is something missing intellectually.
“And what’s missing in John Kerry is replaced by an arrogance and hubris that has led him and people like him to literally live inside fantasies they have concocted.”
Like the reporting you see here? Sign up for free news alerts from WND.com, America’s independent news network.
Limbaugh continued, “I firmly believe that John Kerry is so self-focused, self-aware, self-conscious, so impressed with himself, I think he’s the kind of guy that does sit home at night with the lights off sipping a cocktail after everybody else has gone to bed thinking how great he is and how special he is and how unique he is. And I think he tells himself and convinces himself that he’s actually done one of the greatest acts of statesmanship that’s ever been done here.
“And I think he also believes that as part of this, the power of his brilliance and greatness and presence is such that the Iranians love him now and have profound, deep respect for him and realize what a brilliant gentleman he is. I think he believes all this. I think he believes it because he’s secretary of state. I think he believes it because his leftist ideology points him in that direction. I think he believes it because it’s his personality. I think he believes it because he really, really believes that what’s happened here in this Iranian nuke deal is unprecedented greatness. And I think he really, really believes that nobody but him could have ever done this. And I think he tells himself the proof of that is that nobody ever has done it. And he did it.”
On Friday, a senior Iranian cleric delivered prayers in Tehran as he stood behind a podium declaring, “We will trample upon America,” according to photos released by Iran’s state-controlled media. The English phrase “We defeat the United States” could be seen underneath.
Then on Saturday, Iranian Supreme Leader Ali Khamenei vowed to defy American policies despite the nuclear deal between Iran and world powers signed in Vienna last week.
Ayatollah Khamenei said U.S. policies in the region were “180 degrees” opposed to Iran’s, at a speech in a Tehran mosque punctuated by chants of “Death to America” and “Death to Israel,” according to Reuters.
“Even after this deal our policy towards the arrogant U.S. will not change,” Khamenei said.
Kerry found the hostility “very disturbing.”
“I don’t know how to interpret it at this point in time, except to take it at face value, that that’s his policy,” the secretary of state said in an interview with Saudi-owned Al Arabiya television. “But I do know that often comments are made publicly and things can evolve that are different. If it is the policy, it’s very disturbing, it’s very troubling.”
image: http://www.wnd.com/files/2014/08/rush-limbaugh-black-shirt-600.jpg 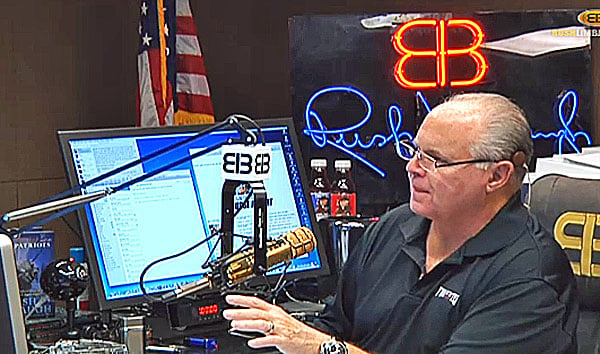 Rush Limbaugh
Limbaugh claimed Kerry’s high opinion of himself is “the only way that you would publicly admit that you are surprised that the Iranians would say what they’re saying, and that you would admit to being disturbed by it. I mean if this disturbs you and if you’re shocked by it, what in the world must you have thought the day before? That with this deal we have buried decades and decades of enmity with Iran? And why did we do that? … How did we finally end all the acrimony. Was it because finally the U.S. had sent smart people like John Kerry to negotiate? And the Iranians realized how smart John Kerry was? And how you couldn’t outsmart John Kerry? And the Iranians realized the greatness of this administration?”
“They have to be delusional,” Limbaugh added. “Kerry specifically has to be delusional here. He’s so delusional, he is so into self, he doesn’t even have the presence of mind to not act surprised. He doesn’t even have the presence of mind not to admit that he’s disturbed. There’s a much better way of dealing with this than to actually go out and admit you’ve been fooled, which is what he’s done. But he doesn’t know that because, you see, it’s not possible to fool John Kerry. He’s too smart. He is too clever. … So he’s deeply troubled at what this means.
“He’s the kind of guy everybody laughs at behind his back and never knows it. And if he did, he wouldn’t understand it. And it’s dangerous having somebody like this who basically brokered this deal all on the pretext and basis of this self-love and adulation that borders on danger.”