Olive oil prices surge due to drought and disease in Spain and Italy
Producers say this year’s harvests are worst they have seen, as consumer demand begins to outstrip supply 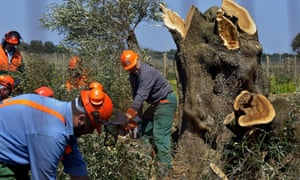 
Salads have rarely been so expensively dressed after a combination of drought and disease pushed the price of olive oil up 10% so far this year, amid warnings from suppliers that harvests are the worst they have seen.
The Italian government has declared a “state of calamity” in the provinces of Lecce and Brindisi on the heel of the country, where olive groves are being attacked by a bacterial disease nicknamed “olive ebola” . Up to 1m centuries-old olive trees could be felled in one of the most picturesque tourist spots of Italy in an attempt to contain the problem.
The cost of the raw material has been increasing for two years as crops have been hit by drought in Spain , the world’s biggest producer of the oil, and the bacterial disease Xylella fastidiosa, which is destroying trees in Italy.
Analysts are expecting prices to remain high in coming months as demand is increasing. Retailers and distributors wanted to buy 12% more olive oil than exporters were able to deliver last month, according to industry insiders. Buyers in Latin America have turned to Europe in the wake of poor harvests over the Atlantic, while eastern Europeans have also been using increasing amounts of olive oil.
The next harvest from southern Europe is not expected until September, but fears of a third poor harvest in a row in Spain and Italy continue to push up wholesale prices of remaining stocks over the summer. The other two large olive oil producers, Greece and Tunisia, had good yield and production, but not enough to compensate for Spain and Italy .
In the UK, heavy price competition between retailers, led by the rise of discounters Aldi and Lidl, has helped keep prices relatively low for shoppers. But this year, retailers and processors have been forced to pass on increases as the cost of the raw material from Italy has hit a 10-year high. The average retail price of a litre of extra virgin olive oil has risen from £6.32 in December to £6.95 this month, according to data from trade journal the Grocer .

One olive oil supplier told the Guardian: “Retailers and suppliers hold a lot of stock and contracts are signed for six months or a year, so volatility in the market can take a while to feed through to supermarket shelves. Retailers absorbed price rises earlier in the year because they were pegged by discounters but there has been absolutely no letup and we’re now in a crisis situation.
“Until this year I would have said this was just the vagaries of the olive oil market. But nobody has seen it this bad. I don’t know that I would go as far as to blame global warming but clearly three years of bad harvest would be almost unknown.”
The EU’s health and food safety commissioner, Vytenis Andriukaitis, visiting southern Italy this week amid concern about the disease, which is also a threat to citrus and grape crops, said it was an emergency situation: “Every day matters. Because every day is a day in which we are putting the healthy olive trees of Puglia at risk.” The EU has warned that there would be serious consequences for supply chains if the disease spreads. 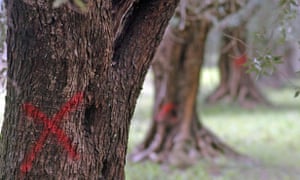 Facebook Twitter Pinterest
Red crosses painted on olive trees that need to be cut down to contain an outbreak of ‘olive ebola’ in Puglia, southern Italy. Photograph: Max Frigione/AP
Olive harvests work on a cycle in which trees generally produce a strong harvest one year and then weaker results the following year as the trees take a bit of rest. Last year should have been a strong season in Spain, but fierce hot and dry weather meant yields were lower than hoped for. This year again, the country suffered from a dry and fiercely hot spring, when the olives flower, raising fears of another poor crop.
Lourdes Negrillo, from Vallejo, a producer from the Jaén province in southern Spain, said: “It didn’t rain as much as it should’ve done in the spring and that doesn’t help with the feeling about this next crop. I think that the new crop won’t be as bad as last year but probably the olives will be smaller and have less quantities of oil. If it rains in September and October then we will get a bit more. It will be a different picture.”
Vito Martielli, an analyst at Rabobank, said good weather conditions during the next few months would be crucial for Spain: “In the coming months, prices are expected to be sustained and in particular the premium extranvirgin olive oil which is experiencing even stronger price increase in Italy.”

Got any recipes for making some good homemade soup?

Hi there, check the food section, lots of recipes for all kinds of dishes.
Sponsored content

Yesterday at 9:58 pm by Proven

Yesterday at 4:58 pm by azareus

Yesterday at 4:41 pm by Diamond

Yesterday at 8:32 am by Proven

Yesterday at 6:12 am by Screwball

Yesterday at 4:38 am by chouchou