By Joseph A. Kechichian 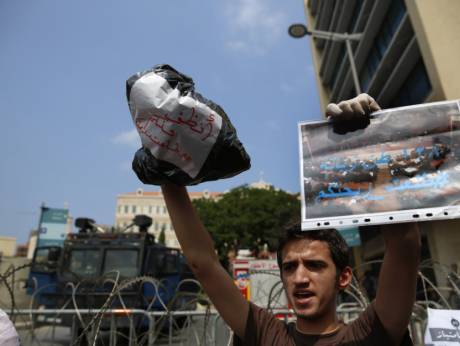 A Lebanese protester holds up a trash bag and a placard with Arabic that reads, “128 tons of garbage, You Stink,” as he protests against the ongoing trash crisis, in front of the government house in downtown Beirut, Lebanon, Tuesday, July 28, 2015. Protesters have closed the main roads in downtown Beirut over the country’s trash crisis. (AP Photo/Hassan Ammar)
Beirut: Amid news reports that highlighted how Lebanese officials added a garbage crisis to their growing list of woes that further sank the country into unresolvable dilemmas, comes a devastating new World Bank report that highlights what ails it.
Relying on solid data from the 2004-2011 period, and supplemented with projections for more recent years, “Lebanon: Promoting Poverty Reduction And Shared Prosperity,” provides a systematic diagnosis that will upset many. It affirms in its primary conclusions what stifles institutions, prevents growth, and denies the creation of effective wealth for a majority of the population instead of concentrating wealth in the hands of about 4,000 families that financially rule the country.
Researched and composed by a large team under the direction of the lead World Bank economist Eric Le Borgne, the report laments that Lebanon’s political development since independence, which was influenced by its evolving confessional system, is now impeding the rise of more effective governance mechanisms.
In the case of electricity—the utility accounts for a staggering 40 percent of Lebanon’s public debt, at the tune of USD 2 billion per year—this effectively means that illegal connections (yes, there are hundreds of thousands who do not pay a single lira for their consumption) and excessively overdue accounts, which means that services delivered in the sector are “attributed to corruption, mismanagement, and to confessional system where segments of the supporting infrastructure (e.g., workers, service providers) are protected by their respective sectarian leaders.” What is revealing is that the cumulative cost of the company’s transfers from 1992 to 2013 stood at a “staggering 55.4 percent of 2013 GDP,” which placed “Lebanon’s public debt-to-GDP ratio at 143.1 percent.” The country’s debt-to-GDP ratio would have been 87.8 percent instead of 143.1 percent if this one problem was resolved, the report affirms, though confessional considerations prevented it.
The World Bank established a list of 11 ranked priority areas that required attention, and concluded that while Lebanon’s twin overarching constraints are deep-rooted, there were potential ways to mitigate them, including the adoption of reform programs that demand the implementation of “outstanding elements of the Taif Accords such as the adoption of a decentralization law, the creation of a lower chamber of parliament that would be elected on a non-confessional basis, improving access to (statistical) information, promoting political stability, and institutional reform and development.” All well and said but probably far too optimistic as the Lebanese confront a garbage crisis, less than 11 hours of electricity per day, trickling water, while the political establishment is paralyzed.
Consequently, Beirut is paralyzed, with its elites unable to overcome sectarian differences. The result, evident to residents and visitors alike, is a systematic hollowing out of the state that is caught in regional crises that further exacerbate local conflicts. While the authors acknowledge that the Lebanese economy grew at a moderate pace over the past few decades, they insist that this was uneven because of frequent and mostly “political” shocks, even if the economy showed some resilience. Real GDP grew on average by an estimated 4.4 percent from 1992 to 2014, although this performance was masked by the impact of several shocks, including the spillover effects of the civil war in Syria that cannot but be negative over the long-term.
In fact, the large influx of Syrian refugees, officially around 1 million souls but probably twice as high given relatively open borders and extremely high levels of corruption that encourages human trafficking, added to the economy’s woes especially when one factored to these figures the presence of an estimated million Palestinian refugees too. As a result, the high growth in the resultant low quality labor force translated into a dearth of jobs for citizens that further increased poverty, which remained unchanged for the past 25 years, itself a good indicator that the country stagnated. The analysis presented in this study confirmed that after 1990, extreme poverty hovered at between 7.5 to 10 percent, although it was estimated that 28 percent of the population was “poor”. Given that the minimum wage set by the state was less than $300 per month, a figure that has not increased since 1996, Lebanon was not able to create well-paying jobs. Under the circumstances, few were surprised that nearly a steady emigration, estimated at 16,000 individuals per month.
Can Lebanon reduce extreme poverty and promote shared interests? Yes, claims the World Bank report if the country, in other words its elites, overcome two mutually reinforcing and pervasive constraints: revamp confessional governance, and protect the country from conflicts and violence. The research conducted acknowledges that these two limitations impose a heavy burden on the economy, with the cost of confessional governance estimated at 9 percent of GDP annually. While Beirut does not sanction illegal activities, a pervasive patronage system effectively means that personal connections (known as “wasta”) influences policy execution and the enforcement of the rule of law. In other words, the report asserts that corruption is endemic among the same elites that run the system, which is only exacerbated by the spillover effects of recurrent conflicts, all of which habituated residents to accept existing conditions.
As if this was not bad enough, the confessional system erodes the seams that keep the country together, best illustrated by how state investments in infrastructure, in transportation, water and electricity, further debilitate society’s abilities to create wealth.
http://yalibnan.com/2015/08/02/world-bank-report-exposes-lebanons-flaws/

» Targeting Al-Halbousi's house... A new warning to "stay away" from Al-Sadr

» Al-Kazemi commenting on the bombing of Baghdad International Airport: a new attempt to undermine Ira

» Al-Amiri calls for consensus on the Prime Minister and the management of the next stage: This stubbo

» Legal expert: Attacks on embassies and airports may expose Iraq to international sanctions

» The Sadrist bloc threatens the Baghdad airport targets: We will rid Iraq of uncontrolled weapons

» Iraqis subjected to blackmail at the Turkish embassy

» Al-Amiri: Disagreement over the prime minister will lead to a dead end

» Once again, Iran is "not satisfied" with the volume of trade exchange with Iraq: a desire to triple

» Al-Fateh: The Position Of The President Of The Republic Is Exclusively Owned By The National Union

» Al-Fateh: The Coordination Framework Cannot Be Ignored, And Most Of The “Political Process Hawks” Wi

» Kurdish Politician: Zebari Was Nominated For The Presidency Because He Is "Uncle" Barzani

» Al-Ittihad: We Will Compete With The Democrat In Their Positions If We Lose The Presidency

» Al-Maslamawi: We Are Able To Absorb The Unemployed In The Center And South Through Investment Projec

» The presidency of the Iraqi parliament questions the legality of recently concluded oil contracts..

» Qaani discusses healing the Shiite rift in Baghdad... and a surprise about the "meeting" of Al-Amiri

» Al-Amiri urges the two poles of Kurdistan to resolve differences: it is reflected in all of Iraq

» Masjedi: The Fifth Round Of Iranian-Saudi Negotiations Will Be Held Soon In Baghdad

» He Demanded A Travel Ban.. Deputy: Al-Kazemi Has Exceeded The Duties Of The Caretaker Government

» Representative Of The State Of Law: The Door To Negotiations With The Sadrist Movement Has Been Clos

» Globally, Oil Records A New High And Approaches $91 A Barrel

» A Deputy Reveals A Large Inflation In Prices, And Baghdad Leads By 80%

» Source: The coordination framework will go to the opposition... But!

» Al-Qabbanji: The parties should resort to the constitution and adopt benefits

» The repercussions of targeting Baghdad airport.. Al-Abadi warns of "sedition"

» Al-Abadi: Beware of sedition, and the state is not built by claiming, bullying, and exclusion