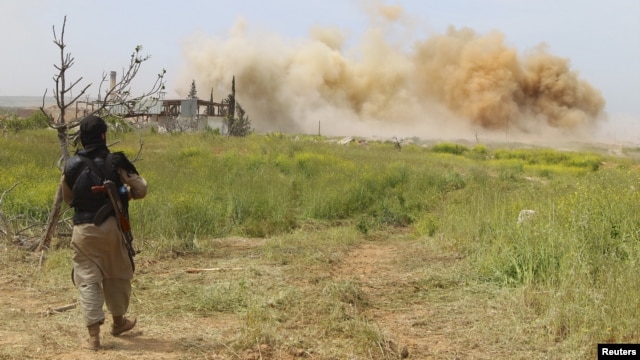 Edward Yeranian
September 07, 2015 1:57 PM
CAIRO, EGYPT—
Arab media are reporting that the government of Syrian President Bashar al-Assad has reactivated a 1980 “friendship” treaty between Damascus and Moscow, handing over the Latakia airbase in Assad's mostly Alawite Mediterranean coastal enclave.
Other Arab media reports say Russia is anticipating an eventual partition of Syria and hopes to bolster the military of a smaller geographic configuration of Syria under Assad.
The London-based, Saudi-owned Arab daily Al Hayat reported Monday that Syria and Russia agreed to reactivate a 1980 “friendship and cooperation” treaty between the old Soviet Union and Syria, after numerous visits by Syrian and Russian officials to each other's capitals.
The paper said Russian forces have taken over the Latakia airbase and were working to improve runways and equipment at other bases in the north of the country.

Russian material
Russian President Vladimir Putin told a journalist Friday in Kazakhstan that Moscow is fulfilling obligations and agreements that date back several years and has been providing military equipment for a while.
U.S. Secretary of State John Kerry indicated Saturday he had warned Russian Foreign Minister Sergei Lavrov against stepped up Russian military involvement in the Syrian conflict, because it would contribute to a worsening of the situation.
Nadim Shehadi, who heads the Issam Fares' Center at Tufts University's Fletcher School of Diplomacy, tells VOA Russia is exploiting perceived U.S. weakness in the region and trying to behave like the old Soviet Union.
"There's a shift in the United States' role, relevance, perception, credibility, power in the region," said Shehadi. "It's not acting as a superpower. So, Russia is now filling that vacuum ... And they're doing so with confidence that the U.S. will do nothing about it."
United Arab Emirates-based analyst Theodore Karasik noted that Russia is “not only taking over the Latakia airbase,” but “inserting [military] forces to protect [President Assad's minority] Alawite sect.”
He said the “Kremlin has found that this is the moment to intervene in Syria in order to prop up the regime at a critical time.” He stressed that Putin's move “caps months of Russian diplomatic activity,” and coincides with a recent claim by the Russian leader that Assad is “ready to hold parliamentary elections.”
US Asks Greece to Close Airspace to Russian Flights to Syria
Greek officials on Monday said the United States is asking it to take back permission for Russian planes to use its airspace on their way to Syria.
A foreign ministry spokesman in Athens says it is considering the request.​
U.S. officials say they have seen prefabricated housing units arriving at a Syrian airfield. One official calls it a "worrisome preparatory step" towards deeper Russian involvement in Syria.
U.S. Secretary of State John Kerry talked about Syria late last week with Russian Foreign Minister Sergei Lavrov. The State Department says Kerry made it clear that if the reports of a Russian military buildup in Syria are accurate, "these actions could further escalate the conflict, lead to a greater loss of innocent life, increase refugee flows, and risk confrontation with the anti-ISIL coalition operating in Syria."
Meanwhile Monday, French President Francois Hollande has ordered surveillance flights over Syria ahead of possible airstrikes on Islamic State.

Yesterday at 7:34 am by Proven

Yesterday at 4:22 am by chouchou

Yesterday at 4:18 am by chouchou

Yesterday at 4:13 am by chouchou

Yesterday at 4:04 am by chouchou