Here we go, now  those crazy people who said the government was using chemicals in the upper atmosphere to modify the weather can stand taller. I have seen such practice for over a decade.

© NASA
Our planet is heating up. There’s mostly consensus on what’s causing global warming (we are), as well as how quickly we need to work to slow it down (very quickly).

Now many climate scientists are coming together around a common goal: keep the planet from heating up more than two degrees Celsius. That’s the point at which we’d see more and more droughts, ever-rising sea levels, and widespread wildlife extinctions.

To achieve their ends, policy experts have focused on reducing greenhouse gas emissions. But it’s not clear whether that will be enough, and some scientists are exploring riskier ways to keep the planet from overheating.

Two Ways To Engineer The Climate 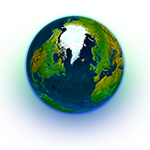 (122 Reviews)
This interactive 3D globe features wonders of the world, political and physical maps, and weather. Discover a lot of…
[url=ms-windows-store://pdp/?productid=9wzdncrdss56&ocid=msnarticlepromo]Get the app[/url]


On June 15, 1991, Mount Pinatubo in the Philippines erupted, spewing a cloud of volcanic ash hundreds of miles across the sky. It was the second largest volcanic eruption of the 20th century.

It also cooled the Earth.

Ken Caldeira is a climate scientist at the Carnegie Institution for Science. He says the next year, “The planet was more or less a degree Fahrenheit cooler than it otherwise would’ve been despite the increasing rise in greenhouse gases.”

That’s because the tiny ash particles and aerosols that were blown into the stratosphere spread around the planet, blocking some of the Sun’s rays from ever reaching Earth. Less sunlight means less heat.

That got scientists thinking: Could we use the same principles to artificially cool the planet?

Theoretically, yes. And we already have the technology needed to do it.

“There are planes that can go up to the stratosphere now,” Caldeira says. “The spraying technologies are well-developed … The bigger question is what are the unintended consequences of doing such a dramatic act.”

The other option for cooling the Earth would be sucking up - or "capturing" - the carbon dioxide clogging up the atmosphere.

“The basic idea is not that controversial,” says Caldeira. “Trees do this already.”

There are startups that have started developing ways to to do it. Everything from dotting the land with artificial trees to installing a huge wall of fans.

The question is whether those efforts can make a difference. The technology isn't quite there yet.

How or when we’d resort to changing the climate is an open question. Until recently, we didn’t have the technology or climate models for it to even be an option.

That could include shifting the patterns of monsoons in tropical climates.

“If that happens,” Allenby says, “then you’re looking at the potential for major chaos in countries like India and that, of course, becomes a problem for the entire world.”

But global warming itself may have some equally troubling consequences.

“If vast areas of the tropics become very hot, there could be wide scale migration pressures,” Caldeira says. “And there could pressure to do something very quickly about climate change.”

Countries most heavily affected by climate change may decide to band together to tackle the problem without buy-in from the international community.

“If a small group of countries does deploy a system and other countries feel threatened by it, there’s a lot of scope for political or even military conflict,” Caldeira says.

“I think we’re at a bit of a crossroads,” he adds. “We need to decide as a civilization whether this is going to be mostly a natural world ... and interfere as little as possible on natural systems. Or are we going to ... manage it the way we’ve managed so many other things.”

And hope everything turns out okay.

This story first aired as an interview on PRI's Innovation Hub. Subscribe to the Innovation Hub podcast. Coverage of Innovation Hub's environmental and sustainability reporting comes, in part, from The Kendeda Fund

http://www.msn.com/en-us/weather/topstories/scientists-are-looking-at-riskier-ways-to-reverse-climate-change/ar-AAeQ1s6?ocid=spartandhp
_________________
For I know the thoughts that I think toward you, saith the LORD, thoughts of peace, and not of evil, to give you an expected end. Then shall ye call upon me, and ye shall go and pray unto me, and I will hearken unto you. And ye shall seek me, and find me, when ye shall search for me with all your heart.