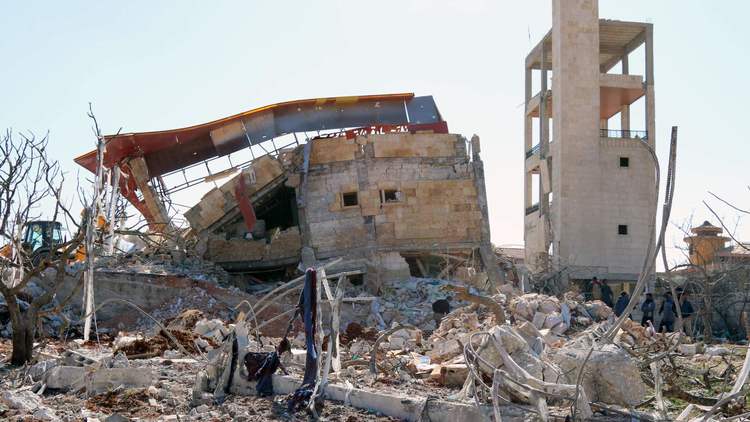 A hospital supported by Doctors Without Borders near Maaret Numan, in Syria's northern Idlib province, lies in ruins after being hit by airstrikes that activists say were carried out by Russian warplanes.
(AFP/Getty Images)


The Pentagon has told the Kremlin where about 50 U.S. special operations forces are working in northeast Syria to ensure they don't come under Russian attack, a U.S. commander said Thursday.
The disclosure by Lt. Gen. Charles Q. Brown Jr., commander of air operations against Islamic State in Iraq and Syria, suggests a thaw in the communications freeze between the U.S. and Russian militaries, which are backing opposing sides in Syria.
The Defense Department did not disclose the precise location of U.S. troops to Russia's Defense Ministry, Brown said, but asked that Russian warplanes avoid airstrikes in the general area.
The Russians have honored the request so far, he said.

Pentagon spokesman Peter Cook said Russia formally requested the forces' location and it was provided by geographic areas, not pinpoint locations.  He would not say when the Russians made the formal request.


See the most-read stories this hour >>

“There are some areas we have talked to them about and that's really where we have some of our coalition forces, particularly as you look around at northern Syria,” Brown said in a teleconference from Al Udeid air base in Qatar with Pentagon reporters.
The Pentagon sent the elite team into northern Syria late last year to help train and advise Kurdish guerrillas fighting Islamic State. The U.S. troops do not take part in the fighting.
The U.S. has condemned Russia’s bombing in Syria, which the Obama administration says is intended to prop up Syrian President Bashar Assad’s forces against an array of rebel groups.
Warplanes from the United States and a handful of other nations focus only on targeting Islamic State, chiefly in eastern Syria.
The U.S. and its allies have accused the Russians of bombing civilians and hospitals around the city of Aleppo in an effort to gain territory before a "cessation of hostilities" is scheduled to begin Friday.
Officials said some airstrikes targeted rebel-held neighborhoods in Aleppo, hitting schools and hospitals run by Doctors Without Borders, an international aid group.
The attacks “cast a shadow on commitments” made by world leaders who forged the ceasefire plan, U.N. Secretary-General Ban Ki-moon said Monday.
The Syrian Observatory for Human Rights, a pro-opposition watchdog group, said warplanes belonging to Russia bombed a hospital in the town of Maaret Numan in Idlib province.
Until now, the Pentagon has said its only contact with the Russian military in Syria was a joint set of rules designed to ensure pilots did not mistakenly fly into — or fire on — one another in the skies above Syria.
That agreement marked a modest breakthrough between the two militaries, which had stopped talking because of Russia's 2014 annexation of Crimea and its continued involvement in the Ukrainian civil war, which the U.S. opposes.
Beyond that, the Pentagon has denied coordinating with the Russians.
In October, the Pentagon said it would send about 50 U.S. special operations commandos to Kurdish-controlled northeast Syria.
Pentagon officials said they did not inform the Russians then because the troops would be far from the war zones, mostly to the south and west, where Russian forces were active.
http://www.latimes.com/world/middleeast/la-fg-us-russia-syria-20160218-story.html