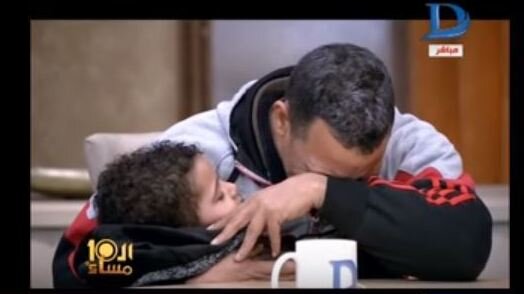 Cherubic youngster Ahmed Mansour Qurany and his father, identified as Mansour Qurany Ahmed, appeared on the Egyptian talk show Al-Ashara Masa'an on Saturday.
Screengrab from YouTube by NPR
After sentencing a toddler to life in prison for murder, the Egyptian military now says that was a case of mistaken identity.
Ahmed Mansour Qurany was sentenced Feb. 16 along with 115 other people involved in a murderous rampage in 2014. The incident happened during a period of unrest following the 2013 ouster of Islamist President Mohamed Morsi. The sentence was handed down by a military court — a system widely criticized by rights groups for speedy trials and minimal legal protections.
The boy's father, identified as Mansour Qurany Ahmed, appeared Saturday on the Egyptian talk show Al-Ashara Masa'an, prior to the military's remarks about mistaken identity.
"This father ... is afraid for his son — for this 4-year-old child," said TV host Wael el-Ebrashy said of Ahmed, who had his son sleeping on his lap.
The child stirred at one point during the program, and Ebrashy jokingly remarked, "Hey, you terrorist, did you kill four people?" Young Qurany turned toward his dad and went back to sleep.
The sentence provoked widespread outcry in Egypt. In Egypt, a life sentence is understood as 25 years and mass trials like this one are common.
Egyptian military spokesman Brig. Gen. Mohamed Samir said in a statement that the charges stemmed from a March 2014 demonstration in the city of Fayoum, south of Cairo.
According to Samir, the court papers accuse a group of Morsi's supporters from the Muslim Brotherhood of opening fire on a crowd of civilians, sparking clashes, killing three civilians and wounding a "large number" of police.
He says a 16-year-old student named Ahmed Mansour Qurany Sharara was implicated over the course of investigations and should have been the one sentenced.
"If it is true that it was a mistaken identity, why did they come to arrest the boy? Why haven't security arrested the right defendant then?" Mahmoud Abu Kaf, a lawyer involved in the case, told CNN. "Most cases involving big events are based on investigations and no tangible evidence. We've seen cases where defendants were either deceased years before the incident or in prison when it happened."
During his weekend appearance on el-Ebrashy's show, the boy's father pleaded that he is a simple, respectable man. He told el-Ebrashy that he was afraid his son would go to prison. You can see the video here:

YouTube
"Nobody take my son away from me," he sobbed, clutching his son to his chest.
It was not immediately clear what the boy's status is in the case now.
After Morsi's ouster in 2013, Egyptian authorities launched a massive crackdown on his supporters, killing hundreds and jailing thousands. That crackdown has expanded to include dissenting voices from across the political spectrum. As Human Rights Watch recently put it, Egypt's security forces and judiciary have "invoked national security to muzzle nearly all dissent."
http://www.npr.org/sections/thetwo-way/2016/02/23/467800713/egypts-military-says-toddlers-life-sentence-was-case-of-mistaken-identity?utm_medium=RSS&utm_campaign=storiesfromnpr

» Reveal important results on the identity of attackers Iraqi military and oil sites
» Life for 25 military Turkey
» Conditions of life: addiction to life to ensure life, it is possible to leave at any time without wa
» Life for those convicted of belonging to the Baath Party "military wing"
» The boycott states of Qatar: The establishment of a military base in Bahrain in case of failure to m