USE LINK FOR VIDEO http://allnewspipeline.com/ISIS_Prepares_To_Attack_US.php 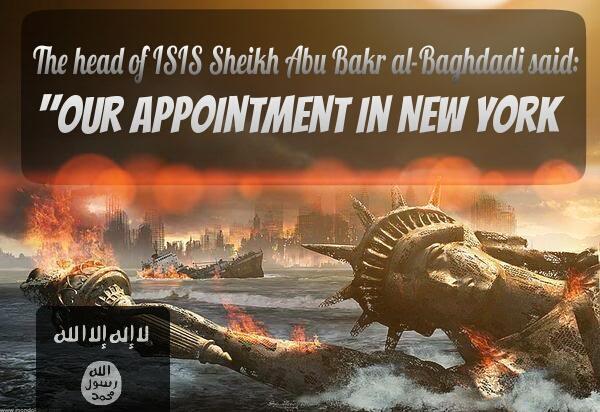 Recently revealed details regarding the Paris attacks that killed 130 people and injured hundreds more, when tied in with previous reports in the U.S. news, indicate a high likelihood that not only has ISIS threatened to attack Americans on U.S. soil, but are in position and fully prepared to do so at any given moment.

New details regarding the Paris attacks were revealed by The New York Times on Sunday and those details are chilling when we look at reports from December 2015 on ANP and across American news outlets.

The Islamic State group terrorists who killed 130 people and injured hundreds more in Paris last year were able to avoid police detection ahead of the Nov. 13 attack by using disposable cell phones. In many cases, the teams of attackers used victims’ phones or only activated their so-called burner phones moments before carrying out attacks throughout the French capital, thus avoiding detection by police and intelligence agencies.

Those are among the newest details revealed by the New York Times Sunday about how at least nine suspects planned and carried out the gruesome massacre. Investigators are still piecing together the events that immediately preceded the attacks and hope to glean details from the arrest of Salah Abdeslam, the suspected logistics chief of the attack who was apprehended in Brussels on Friday. The events have also helped inspire an international conversation over the use of mobile encryption, a widely adopted means of increased data security that protects the integrity of a message while in many cases making it impossible for authorities to access those communications before it’s too late.

“Everywhere they went, the attackers left behind their throwaway phones, including in Bobigny, at a villa rented in the name of Ibrahim Abdeslam,” the Times reported. “When the brigade charged with sweeping the location arrived, it found two unused cell phones still inside their boxes.”

A flashback to reports from December where we see "On December 4, four dozen of these cell phones were purchased at a Walmart in Cape Girardeau. On December 5, two immigrants bought 59 cell phones from a Walmart in Lebanon. Thirty-two cell phones were purchased in Macon. Fifty were bought in Columbia. And Jefferson City police reported that three people bought over 50 of the phones at a Walmart there; the Jefferson police acknowledged that “three men with accents” bought the phones, but stated that because they did not have a legal reason to detain them, they allowed them to leave.

Such cell phones, nicknamed “burners,” can be bought and used anonymously, then thrown away so they cannot be traced–thus leading to fears of terrorist usage." (Sources - Breitbart , ABC 7 and 13KRCG )

Within days other suspicious bulk purchases were noted as well as disturbing news of stolen plumbing supplies and an FBI investigation into countless stolen propane takes, all of which could be used as "Hell Cannons" as explained by Stefan Stanford here at ANP on December 15, 2015 . By December 26, 43 more propane tanks had reportedly been stolen and the bombshell news that the U.S. government had "lost track" of 9,500 suspected terrorist immigrants .

It is also noteworthy that "remote controlled" electronics were also reported stolen back in December 2015, as were used in the San Bernardino massacre, where NBC News reported "The attackers who killed 14 at a California office party Wednesday left behind a remote-controlled explosive device as they raced away in a black SUV with the bomb controller in their hands."

There is no doubt the U.S. is on the ISIS hit list, they have openly stated their intentions. There is also no doubt there are ISIS supporters and/or members already inside the United States as evidenced by the San Bernardino massacre where one of the perpetrators had been allowed into the U.S. on a Fiance Visa after two rounds of government "vetting."

ISIS POLLS FOR LOCATION OF NEXT ATTACK

After the terrorist attack in Brussels on Tuesday, to which ISIS has claimed responsibility for, ISIS conducted a poll as to which country would be hit next, mocking the fact that world landmarks such as the Eiffel Tower had paid tribute to the Brussel victims by illuminating in the colors of their flag. The poll was headlined "What will be the color of the Eiffel Tower in the next attacks ?"

While the UK and Russia garnered the most votes in their poll, it is of interest that the first location listed as an option was The United States. A user affiliated with the terror group tweeted that “the Islamic State will attack London, Washington, Rome and all the infidels’ capitals.” Another declared: “the Crusaders are blundered and confused. Yesterday Paris, today Brussels, and they don’t know where will be the next attack,” a loyalist posted. (Source Vocativ )

RELATED - 'We Have To Do Something And We Have To Do It Rapidly' - Bombshell Donald Trump Interview With Michael Savage: 'The Whole World Is Collapsing' - March 2016 Map Shows What US Cities Received Most Refugees

On November  12, 2015 Barack Obama was interviewed by ABC’s George Stephanopoulos where Obama stated that ISIS had been "contained."

The next day, November 13, 2015, ISIS struck Paris in a series of coordinated attacks which killed 130 people and injured hundreds more.

On December 3, 2015 Obama told CBS This Morning that "ISIL is not going to pose an existential threat to us."

That same day ISIS supporters Syed Rizwan Farook and Tashfeen Malik (Malik having been allowed entry on a Fiance Visa after supposedly being "vetted"), massacred 14 people and injured 22 more in a terror attack in San Bernardino, California .

Yesterday Barack Obama co-hosted a press conference in Argentina with President Mauricio Macri where he once again stated "Groups like ISIL can’t destroy us, they can’t defeat us. They don’t produce anything. They’re not an existential threat to us"

Perhaps we should all be holding our collective breaths as we wait for the other shoe to drop.