Brown Marmorated Stink Bug — A Pest on the Move

Brown Marmorated Stink Bug — A Pest on the Move

Brown Marmorated Stink Bug — A Pest on the Move
By Russell May, Technical Specialist for Terminix
Photographs courtesy of Terminix If you are like me, a homeowner and aspiring home gardener you may be noticing an increase in stink bug sightings during the year in and around your garden and house. Specifically, the Brown Marmorated Stink bug, Halyomorpha halys.
Originating in China, Korea and Japan, the Brown Marmorated Stink Bug (BMSB) is an invasive pest species and was officially identified in Allentown, Pennsylvania in 2001. BMSB has a broad host range including a wide variety of orchard crops, ornamental trees and shrubs, small fruits (berries), vegetables and field crops. 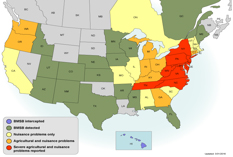 Since then, this bug has expanded from its discovery point to become an agricultural and/or nuisance pest in 21 of the 50 states. Stink bugs have a piercing sucking mouthpart they use like a straw to remove liquid nutrients from host plants and fruits. Damage is noticeable as small brown necrotic feeding marks on host plants and fruits and even catfacing of fruits. The Brown Marmorated Stink Bug is a shield shaped insect in the Family Pentatomidae. Adults range in size from 12-17mm and are a brown marbled color with a checkerboard appearance of brown and white on the exposed lateral margins of the abdomen. Key identifying characteristic of nymphs and adults is the alternating white and dark coloration of the last two segments of the antennae. The front margin of the thorax from the eye to the corner is smooth. In adults a pale white coloration of the legs is also noticeable. First instar nymphs are known or have an orange coloration and can be seen lingering around the original egg mass. Eggs seen are usually pale white, barrel shaped and 1 mm across. Eggs are usually laid in clusters numbering up to 25 on the underside of plant leaves. Egg laying occurs in April in Pennsylvania but may occur sooner as you head south. Females may lay up to 400 eggs on host plants from April to September.
When disturbed all stink bugs will emit a strong odor. Stink bugs are also known to enter homes during the late summer and early fall as temperatures cool in the evenings. When the BMSB begins to seek an overwintering site, it will leave its host plant near homes or businesses and land on a south or west wall which is being heated by the sun in the afternoon. Unsealed cracks in foundations, around windows, door framing and even soffits can provide the BMSB and other occasional invaders an access point to voids existing inside foundation walls. Holes in vent and window screens can also provide access to crawlspaces and attics. The bug will penetrate as far as it can into these voids and then overwinter in a state of reduced activity. On sunny days during the winter these voids on the south and west walls may warm up and trigger activity. The bug will then walk over warm surfaces usually interior walls, ceilings and windows inside the structure.
Prevention is usually the best form of control. Sealing up entry points on the foundation and gaps existing around windows and soffits can reduce entry into the building. This should be done during the mid and late summer months of the year before occasional invaders start seeking overwintering sites. Once inside walls and other voids, total control is very difficult due to limited access. Any structure with a history of problems should take steps to seal as many exterior points as possible concentrating on the south and west walls.

» The Big Stink
» Corruption pest repellents to invest in the country
» No Longer an Innocent Pest, Ticks Can Now Infect Your Pet with Multiple Diseases
» IRAQ HOLDS A CONFERENCE TO INVEST HUMAN RESOURCES AND MOVE THE LABOR MARKET TO MOVE THE ECONOMY TO A
» Sesame Brown Rice