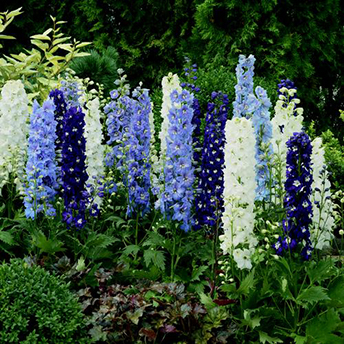 Delphinium is a perennial favorite as the tall spikes of blue flowers in the background of a stately English or cottage garden. The modern delphinium flower may be a single or double rosette in popular blue or red, pink, white, violet and yellow. Many of the flowers have white or black centers known as “bees.”

Delphinium, a native throughout the Northern Hemisphere includes about 300 species in the Ranunculaceae (Buttercup) Family. The name "delphinium" originated with the ancient Greeks who thought the shape of the new flower bud with spur resembled that of a dolphin’s nose. Delphinium is often called by the common name "larkspur" which is shared between the perennial Delphinium and the annual Consolida species. Most delphinium hybrids and cultivars are derived from Delphinium elatum. Hybridisation was developed in the 19th-century led by Victor Lemoine in France. Other hybrid crosses have included D. bruninianum, D. cardinale, D. cheilanthum, and D. formosum.
The Pacific Giant hybrids are a popular variety today that typically grows four to six feet tall on long stems developed by Frank Reinelt, renowned breeder in the United States. Millennium delphinium hybrids, bred by Dowdeswell's Delphinium Ltd. in New Zealand, are reportedly better in warmer, more humid climates than the Pacific hybrids. Flower colors in shades of red, orange, and pink can be found hybridized from D. cardinale by Reinelt and Samuelson. 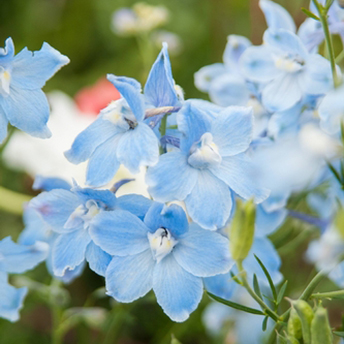 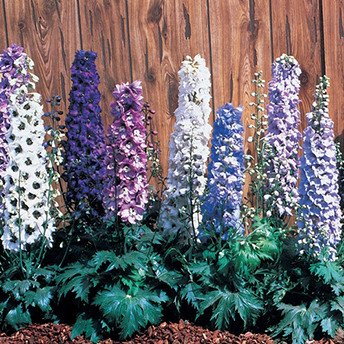 The Delphinium Guardian, Aurora and Magic Fountain series also offer great colors and very controlled growth; this new breeding is beginning to replace some of the older elatum hybrids on the market. Blue purple and lavender are the most popular colors in this series.
There are three interesting and unusual Delphiniums originating from Tissue Culture coming from Holland offering very distinctive and spectacular looks with some exciting color breakthroughs: Red Caroline, Princess Caroline and Delft Blue.
New grandiflorum, cardinale, and nudicaule hybrids offer a bouquet of flowers instead of one large flower. Varieties of these include Diamonds Blue, Summer Nights, Summer Stars, Summer Morning, and Summer Clouds.

Delphiniums in the garden 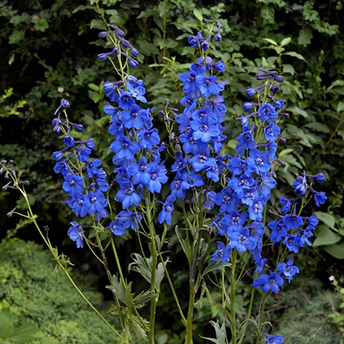 Homeowners can begin their Delphiniums from seed or as plants through garden retailers. Delphiniums are very easy to grow in the northern climates with very little maintenance. As a perennial, they tolerate cool northern climates and overwinter with ease as a hardy perennial in Zone 4. Some misunderstanding about non-hardiness actually comes from hot and humid climates, which the plants cannot tolerate for long periods of time. Delphiniums act more like annuals in the southern climates. After the first flush of flowers, plants can be cut back and a second set of flowers will appear on shorter stems. Mulching is not recommended, because it can cause stem rot. After heavy frost, late-fall early-winter plants need to be cut back and cleaned up. Winter protection is not necessary, but plants can be covered with hay or leaves to protect the crowns. This protection needs to be removed very early in spring to maintain a healthy Delphinium in the garden. In natural snow-covered areas, no extra protection is needed. 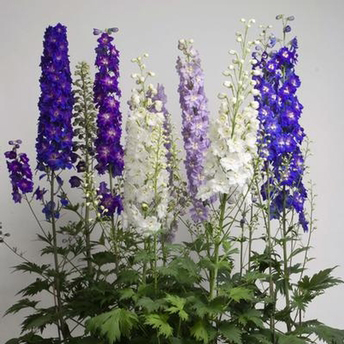 Delphiniums are generally very easy to grow plants, but a few issues can be encountered during growing and propagation.
Powdery Mildew: High humidity and poor air circulation can cause powdery mildew. The best way to get rid of this problem is by keeping the foliage as dry as possible.
Snails and Slugs: To alleviate this problem, try setting up some simple beer traps.
The National Garden Bureau recognizes and thanks Zoltan Kovacs from Dümmen Orange as author and contributor to this fact sheet.

» Saleh: 2016 year is ideal for the deletion of zeros
» 2016: The Year Americans Found Out Their Elections Are Rigged
» 2016: String of earthquakes around the world rings in the New Year
» Statistic: 2016 worst year for civilians in Iraq
» Habs end 2016 with a 4-3 OT loss to the Penguins. New Year's resolutions!