'Matthew is very different from Clare' 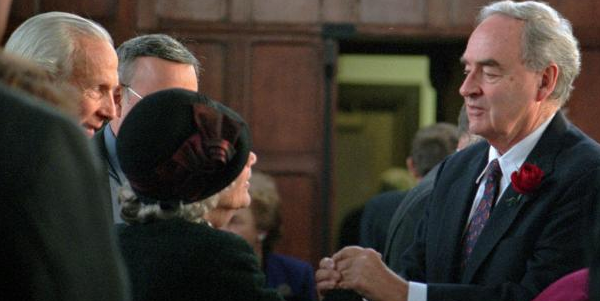 Harris Wofford, right, is comforted after the death of his wife, Clare.
Harris Wofford, a Pennsylvania Democrat who served in the U.S. Senate between 1991 and 1995 – and who was married to a woman named Clare for 48 years, before she died in 1996 from leukemia – announced via an op-ed in the New York Times he had found love again and was set to marry, this time to a man 50 years his junior.

“Too often, our society seeks to label people by pinning them on the wall – straight, gay or in between,” he wrote, in a piece entitled, “Finding Love Again, This Time With a Man,” in the New York Times. “I don’t categorize myself based on the gender of those I love. I had a half-century of marriage with a wonderful woman, and now am lucky for a second time to have found happiness.”
His new love, which he described as developing from a friendship forged on the beach in Fort Lauderdale, Florida, is named Matthew Charlton, age 40.
“As we talked, I was struck by Matthew’s inquisitive and thoughtful manner and his charm,” Wofford wrote. “I knew he was somebody I would enjoy getting to know. We were decades apart in age with far different professional interests, yet we clicked.”
Shortly after, the two began to travel the country and to Europe, “becoming great friends,” he wrote.
“We both felt the immediate spark, and as time went on, we realized that our bond had grown into love,” Wofford wrote.
Wofford said it took three years, but he finally shared his feelings for Charlton with his three children and their families.
“To some, our bond is entirely natural,” he wrote. “To others, it comes as a strange surprise, but most soon see the strength of our feelings and our devotion to each other. We have now been together for 15 years.”

He then spoke of his support for “gay” marriage, and said that he felt “lucky to be in an era where the Supreme Court has strengthened what President Obama calls ‘the dignity of marriage’ by recognizing that matrimony is not based on anyone’s sexual nature, choices or dreams. It is based on love,” he wrote.
He also said: “Matthew is very different from Clare. The political causes that continue to move me do not preoccupy him, nor have I turned my priorities to design, the focus of his driving talent. Still, the same force of love is at work bringing two people together.”
He quoted from a Robert Frost poem, remarked on his previous “pull[s] of passionate preference,” and underscored the similarities of the “gay”-rights movement to the civil rights struggles of Martin Luther King Jr. days.
“All this is on my mind as Matthew and I prepare for our marriage ceremony,” Wofford finished. “On April 30, at ages 90 and 40, we will join hands, vowing to be bound together.”