Hidden lake could contain species isolated for millions of years. 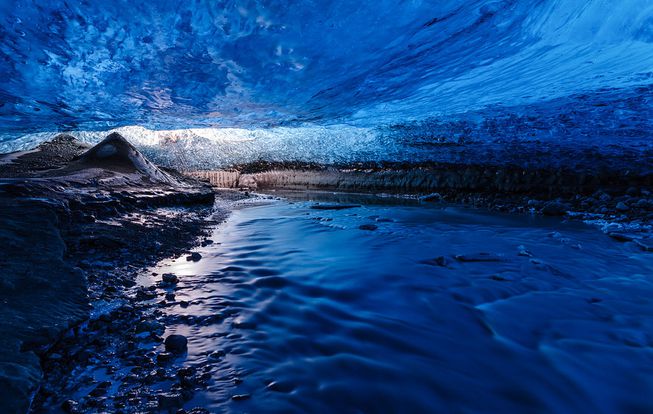 These ice caves in Iceland might give a sneak peek of what it looks like deep under Antarctica's glaciers. (Photo: Chris Marquardt/Flickr)
Antarctica might be an icy, barren, windswept landscape today, but millions of years ago it was home to thriving forests, dinosaurs, and a breathtaking landscape replete with rivers, lakes and massive canyons. Much of its past is still sitting there, buried underneath layers of ice, waiting to be discovered in the form of fossils and geology.
It's even possible that ancient creatures still live under Antarctica's ice, hidden for millennia beneath the continent's cold glacial cap.
Now researchers have made an extraordinary discovery that could house some of the continent's many secrets: a massive, 62-mile long, ribbon-shaped subglacial liquid lake, reports Motherboard. The finding echoes the discovery of Lake Vostok in the latter half of the 20th century, another Antarctic subglacial lake from which samples have been taken that contain evidence of life. This new lake is slightly smaller than Lake Vostok, but its close proximity to an established research station means it could be more easily probed for life.
The lake was discovered after researchers noticed that ice at the surface was unusually grooved on a large scale, indicating the potential presence of liquid water below. It appears connected to a massive canyon — now considered the largest canyon system on Earth, which was recently discovered using the same method. Subterranean channels leading away from the lake might still funnel flowing water into the ocean many miles away.
Since this lake would likely have been isolated, trapped under the ice, for around 25 million years, biologists are giddy at the possibility that ancient life forms could still survive within it. The fact that signs of life have been discovered at Lake Vostok only increase the odds that creatures may be lurking in these icy waters too — perhaps alien-like creatures that have evolved strange features to help them survive in such a frigid habitat.
Potential expeditions to explore under the ice are already being charted, so it may not be long before some of Antarctica's secrets begin to be uncovered. It's an exciting find, one that proves that there are still frontiers to be explored right here on Earth.
http://www.mnn.com/earth-matters/wilderness-resources/stories/huge-subglacial-lake-discovered-underneath-antarcticas-ice

» A Massive Lake Of Molten Carbon The Size Of Mexico Was Just Discovered Under The US
» Volcanic activity around the world: Rare lava lake discovered at Turrialba (Costa Rica), Bogoslof (U
» Huge ice deposit found on Mars - enough to fill Lake Superior
» There is a bomb underneath you." It's the largest releases of methane in California history:
»  Jubouri: Iraqi victory in Nineveh underneath it meets all denominations and nationalities