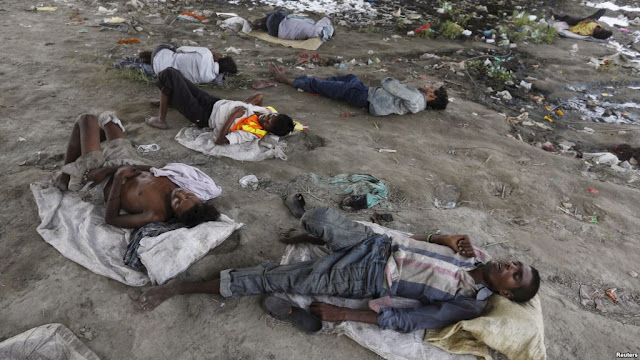 With temperatures now pushing 50C (122F) with high humidity and the death toll rising rapidly, the heat wave in parts of India has now reached heat levels a human body cannot function and  begins to break down.
The sizzling heat wave has claimed more than 300 lives in India, and officials have forbidden daytime cooking in some areas to prevent fires that have killed nearly 80 others.
The eastern state of Bihar banned cooking between 9 a.m. and 6 p.m. after accidental fires exacerbated by dry, hot and windy weather swept through shantytowns and thatched-roof houses in villages and killed 79 people.
People are also barred from burning spent crops or holding fire rituals as part of Hindu religious practice.
Disaster management official Vyas, who goes by one name, said Friday that anyone who violates the orders could face up to a year in jail.
At least 300 people have died of heat-related illness this month, as more than 330 million are also struggling with severe drought.
Three weeks into April and Ananthapuram is burning under an intolerable heat wave with daily temperatures touching 44 degrees Celsius, making it one of the hottest places in the country, according to private weather forecaster Skymet.
Step out around 11 am and you feel you are being physically assaulted by the heat, a steady stream of scorching blows raining all over your body.
While it is unsurprising that people are collapsing in this heat, the tragedy lies in the fact that if adequate precautions are taken, heatstroke deaths like Gopal's and Venkataiah's are preventable, according to experts, unlike in other natural calamities such as earthquakes and floods.
This is the second consecutive year southern India has suffered from a deadly heat wave, after some 2,500 people died in scorching temperatures last year.
http://www.thebigwobble.org/2016/04/indian-heat-wave-death-toll-tops-300-as.html