Almost 50,000 tonnes of dead salmon and sardines along with millions of dead clams off the coast of

Almost 50,000 tonnes of dead salmon and sardines along with millions of dead clams off the coast of

Almost 50,000 tonnes of dead salmon and sardines along with millions of dead clams off the coast of Chile as a result of red tides caused by El Niño 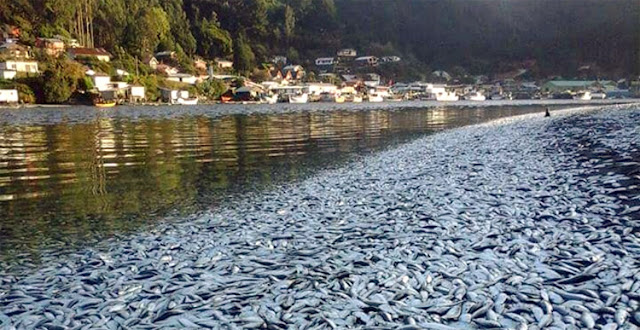 Photo ecowatch.com
So far this year it is estimated that 40,000 tonnes of salmon and 8,000 tonnes of sardines have been thrown off the coast of Chile as a result of red tides caused by El Niño.
A huge amount of dead salmon and sardines are accumulating on the Pacific coast of Chile since early this year due to the effect of climate phenomenon known as El Niño, reports Telesur.
It is estimated that a total of 40,000 tons of Salmon in the region of Los Lagos, representing 12% of the annual production of salmon from Chile.
This month a further 8,000  tonnes of sardines washed up in the mouth of the river Queule.

The region of Los Lagos, Chile is currently affected by a the biggest "red tide" in its history.
The algae bloom which has already killed thousands of tonnes of fish and now millions of molluscs (clams) are covering the beach.
Thousands of Chilean fishermen have blocked roads with barricades in the region of Los Lagos, saying government efforts to mitigate the economic effects of a harmful algal bloom have been insufficient.
For the last four weeks, the southern-central region of Los Lagos has been plagued by what scientists say is the biggest "red tide" in its history.
The red tide - an algal bloom that turns the sea water red - is a common, naturally recurring phenomenon in southern Chile, though the extent of the current outbreak is unprecedented.

Earlier this year hundreds of sea lions washed up dead in Chile: El-Ninõ was blamed.
Last summer thousands of sea birds were found dead on beaches in Chile a week after 37 dead whales washed ashore
Last winter more than 300 whales were found washed up in a remote inlet in Patagonia in southern Chile in one of the largest die-offs on record, researchers said.
"It was an apocalyptic sight."
http://www.thebigwobble.org/2016/05/almost-50000-tonnes-of-dead-salmon-and.html