Extreme rental living in Los Angeles: Want to live in a van, near the river? Or maybe a RV is more y

Extreme rental living in Los Angeles: Want to live in a van, near the river? Or maybe a RV is more y

Extreme rental living in Los Angeles: Want to live in a van, near the river? Or maybe a RV is more your taste?

How extreme can the housing situation get?  Can things get crazier?  Probably.  Are people in SoCal living in a warped bubble thanks to everyone thinking they are some kind of marketing guru?  When you look at the rental revolution, the answer is a resounding yes.  We live in a world where Black Swans are common even though by definition they should be extremely rare.  Just last year, the notion of Trump being the Republican candidate would have been dismissed.  Yet here we are.  Bernie Sanders?  It was going to be Clinton and Bush with no outside surprises.  The establishment is blind and most people fall into lemming like behavior.  You are either an “R” or a “D” but in the end, the establishment on both sides is virtually the same when it comes to finances.  In housing the amount of sheep like behavior is amazing.  This is how we get people renting out vans and RVs as if they were luxury rooms.  And that brings us to a current trend in the housing market: extreme rental living in Los Angeles.

Extreme Housing
We truly live in a Twitter universe.  A large number of people are now getting their news from Facebook feeds and what is on there isn’t exactly news.  I see a few posts on the feed including some for Selena Gomez, Beyonce, and Game of Thrones.  You start talking about the Fed or derivatives and you might as well start talking gibberish.  The proof is in the pudding as they say and just look at what qualifies as rental space today.
Living in a van in Venice: 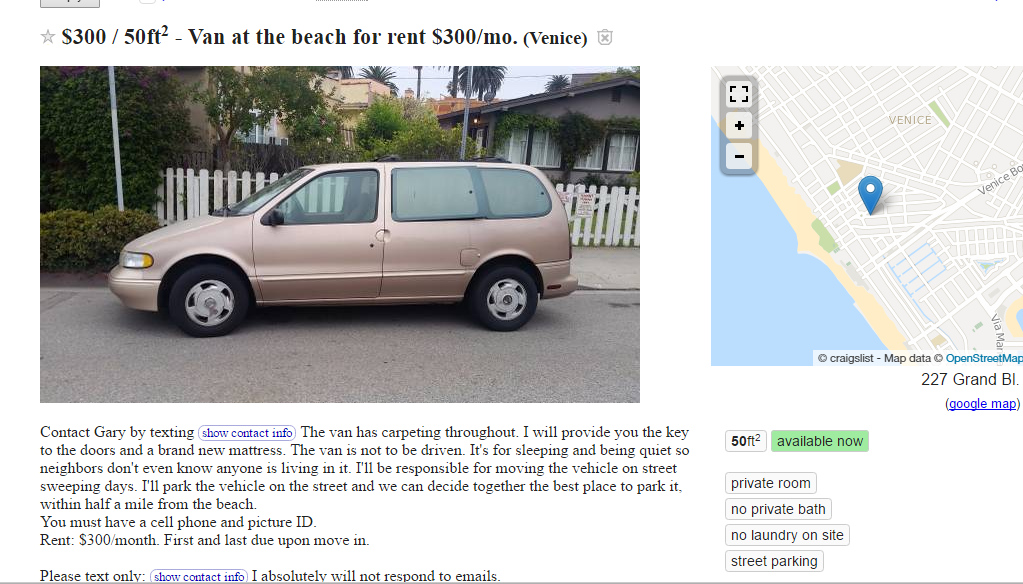 “The van is not to be driven.  It’s for sleeping and being quite so neighbors don’t even know anyone is living in it.”

So while someone looking to buy is paying $1 million plus for crap shacks in Venice the block is going to have shadow renters living in tinted vans.  How great is that?  You can also shower at the local L.A. Fitness and brush your teeth by the ocean.  You get 50 full square feet of living space here.  I like that they have to qualify that there is no laundry on site.
This of course, is what passes as sensible today.  “Hey, pay me $500 and you can live in my van.  Just don’t make any sounds during the daytime as to not disturb the neighbors and all the Taco Tuesday baby boomers who may be perturb by you popping out.  This is after all a “prime” community.”
And this continues: 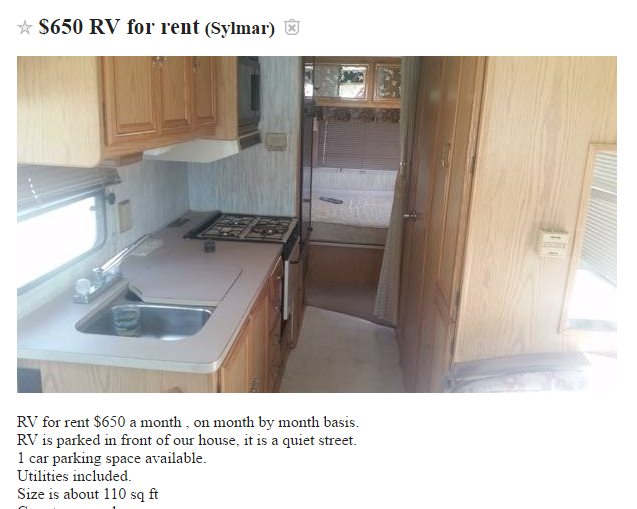 Here is a more “sensible” choice in Sylmar.  You can rent a RV parked in front of a house for $650 per month.  At least here you get utilities, a shower, and a toilet.  That is a big plus.  Or maybe you have dreams of living out a real Breaking Bad lifestyle: 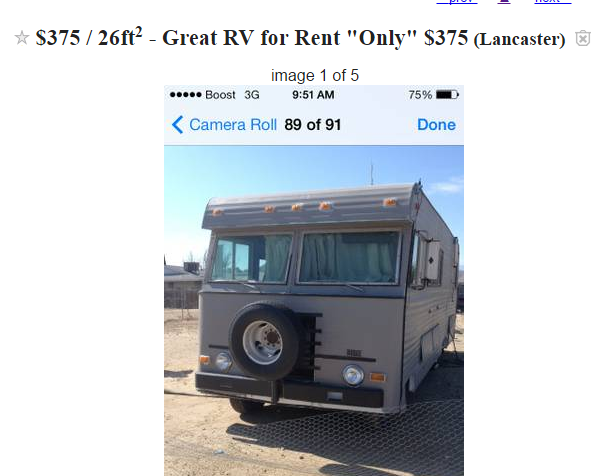 We’ve reached an odd sort of rental revolution.  People are realizing they can charge rent for pretty much anything at this point so as long as there is no recession.  Renters and homeowners for the most part are month-to-month.  Even if you have good equity in your property and your paycheck stops, good luck covering the mortgage.  At least you can rent out a tent in your backyard for $500 a month to hold you over.  Of course the blind house humpers will see this as somehow healthy.  Of course whenever the mention of a correction is discussed they always think it will happen in sort of orderly fashion according to their plans.  Why would it?  We live in an “extreme” culture right now.  It is all about keeping it real and making sure no one is throwing shade on you.  Right now I’m throwing shade on housing apparently.  Yet this is what is going on.  Knock yourself out and plunk down $200,000 for that million dollar crap shack with an $800,000 mortgage for 30-years.  Let us not even discuss the AirBnB conversion of many homes into virtual hotels in prime areas.  You might think you are living in a “quite suburban hood” but your neighbor might be cashing in rental checks without your knowledge.
Extreme conditions create extreme outcomes.  Yes, all of this of course is reasonable.
http://www.doctorhousingbubble.com/extreme-rental-living-in-los-angeles-rents-rvs-cars-being-rented-out/

» Earth’s extreme weather gets more extreme: river of hail runs through Arabian Desert
» Living in Cars Is Becoming Even More of a Thing in Los Angeles
» While denouncing what she viewed as extreme views on women, Hillary Clinton went to the extreme,
» Extreme Weather Danger: New Mortality Records From Deadliest Extreme Weather Events Announced
»  source: Baghdadi living and living in this state