MUST READ, GOOD LORD, IF WE DID THIS, WE WOULD BE IN JAIL

MUST READ, GOOD LORD, IF WE DID THIS, WE WOULD BE IN JAIL

FBI 'won't touch it' for fear of offending Muslims 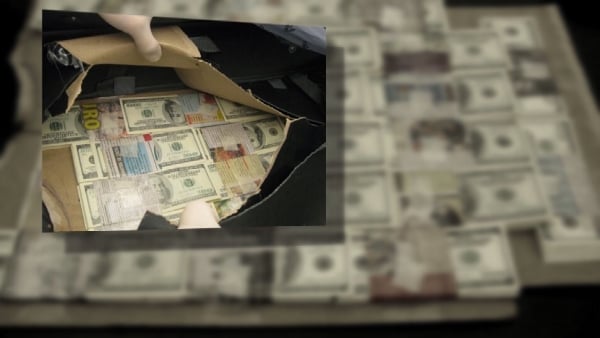 Transporting large amounts of cash overseas is perfectly legal. But it was who was carrying the money … and where it was going that caught the attention of law enforcement, according to a report by KING 5, the local NBC affiliate for western Washington.
Those hauling the cash-laden cases were Somali-Americans who’d come to this country as refugees. They routinely send money back to Somalia. And many of the greenbacks headed to the jihadist-infested East African country come from welfare checks the refugees receive from the U.S. government, compliments of American taxpayers.
Carrying more than $10,000 while traveling out of the United States is legal as long as the traveler declares it by filling out a one-page federal form.
It was while looking at these slips of paper that terrorism expert Glenn Kerns found a disturbing pattern.
“The thing was the amount, the staggering amount,” said Kerns, a Seattle police officer who was assigned to the FBI’s Joint Terrorism Task Force for 14 years before he retired in December.
The cash couriers were working for hawalas – businesses that derive their name from the Arabic word for “transfer.” Hawalas are part of a traditional system of banking in Shariah-compliant Muslim communities.
Seattle and King County are home to the fourth largest Somali community in the United States. More than 132,000 Somalis have come to the U.S. as “refugees” since 1983, with more than 60 percent arriving since the late 1990s.
The Somali refugees continue to arrive in the U.S. at a rate of 750 a month, placed in dozens of U.S. cities including Seattle, San Diego, Minneapolis, Atlanta, Lewiston, Maine; Fargo, North Dakota; Boise and Twin Falls, Idaho; and Columbus, Ohio, among other places.
Many use the hawalas to send money back to their families in Somalia.
But is all of it going to downtrodden family members?
That’s the question Kerns wanted the U.S. government to investigate.
It would make sense, since Somalia is home to an active jihadist rebellion from al-Shabab, an al-Qaida affiliate that slaughters Christians in neighboring Kenya and seeks to establish an ISIS-like caliphate in East Africa.
“(They) have Al Shabaab, which has been designated a terrorist organization, and our concern is how much money is going to them?” Kerns told KING 5.

» GOOD LORD, what Obama and his DOD did to us
» I peed on the ???? good Lord have mercy
» "Russia Warns America Is At The Abyss: Next 10 Days Will Shake The World"-MUST READ, OH LORD
» Good Lord! Cop says Red Cross told him not to pray with flood victims
» Baghdad today video....- GOOD LORD, RV ALREADY - THIS IS AMAZING, AND NO ONE IS TALKING ABOUT IT

» In the presence of 11 countries.. An Iraqi military delegation participates in the "Dragon Group" me

» Dollar prices recorded a noticeable decrease in the local marketsproposals from

» To adopt the yuan currency.. Disclosure of "undeclared" negotiations between Baghdad and Beijingprop

» US pressure on the central bank paralyzes Iraqi markets

» Federal Court: obligating the Kurdistan Regional Government to hand over all oil production

» The US State Department: We are ready to work with Al-Sudani, and the demands of "October" have not

» Newspaper: A new revival of the dialogue between Baghdad and the region with a partial solution to t

» MPs and experts: Two obstacles stand in the way of passing the 2023 budget

» Launching the education strategy in Iraq for the next 10 years

» The Iraqi markets are awaiting the visit of the Iraqi delegation to Washington to discuss "Swift".

» In 3 governorates, trade begins with the sale of subsidized foodstuffs

» Transport directs dealings in Iraqi dinars instead of dollars

» Kurdistan announces the cessation of oil exports to Turkey

» Lavrov: The joint committee between Iraq and Russia will hold its meetings in Baghdad

» For the second day... the bank's dollar cash sales increased in the currency auction

» The government is reassured.. New fears of a deficit that cuts the salaries of employees and retiree

» Economist: Central Bank actions will lead to a drop in the price of the dollar

» Banking expert: The application of the recent instructions of the Central Bank will lead to the stab

» Parliamentary Finance: The Istanbul meeting yielded happy results that pave the way for the upcoming

» Russia: Our investments in Iraq amount to more than 10 billion dollars

» Opening an investigation into the crimes of forging customs declarations

» Emerging parties calling for their involvement in drafting the election law

» Formation and empowerment of women

» The World Bank expects a slowdown in economic growth in Iraq

» Promising projects to increase production capacity in the southern refineries

» Specialists: Banks have turned into "shops" and control procedures are "insufficient".

» The crisis of high prices of food, medicine and fuel intensifies in Sulaymaniyah

» Dome of the world.. Baghdad restores the luster of relations and raises the “red card” in the face o

» An American report: the 2003 war is a crime... and Bush's allegations are false

» The dollar, the budget, and the visit to Washington at a “framework” table, in the presence of Al-Su

» The dollar crisis in Iraq.. “no change” despite the reassurances after the Istanbul meeting

» With the document, the termination of the assignment of “Adel Salman” to the membership of the Board

» Al-Azm Alliance: Al-Sudani is able to solve the dollar crisis

» Iraq calls for a cease-fire between Russia and Ukraine

» Lavrov from Baghdad: We discussed bilateral relations and investment opportunities

» Official: The Kirkuk-Ceyhan pipeline was not damaged by the earthquake and the oil flows are continu

» Coordination framework: The Council of Ministers intends to submit the 2023 budget to Parliament for

» Al-Samarrai: The prime minister's efforts to stabilize the dollar confirm its ability to dismantle t

» Including investment and war... a number of "important" files that Iraq is discussing with Russia