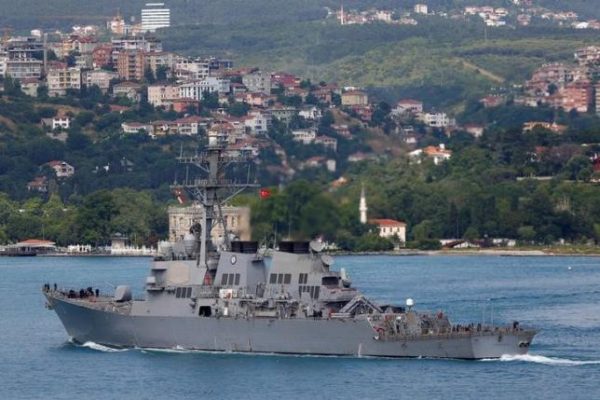 U.S. Navy guided-missile destroyer USS Porter sets sail in the Bosphorus, on its way to the Black Sea in Istanbul, Turkey, June 6, 2016. REUTERS/Murad Sezer
The United States will maintain its presence in the Black Sea despite a Russian warning that a U.S. destroyer patrolling there undermined regional security, the U.S. Navy Secretary said.

The USS Porter entered the Black Sea this month, drawing heavy criticism from Moscow. Turkey and Romania are expected to push for a bigger NATO presence in the Black Sea at the NATO summit in Warsaw next month.
Aboard the USS Mason, another U.S. destroyer, in the Mediterranean on Thursday, Navy Secretary Ray Mabus told Reuters that it was the U.S. Navy’s job to deter aggression and keep sea lanes open.
“We’re going to be there,” Mabus said of the Black Sea. “We’re going to deter. That’s the main reason we’re there — to deter potential aggression.”
Mabus spoke days after Russia criticized NATO discussions about a creating a permanent force in the Black Sea.
“If a decision is made to create a permanent force, of course, it would be destabilizing, because this is not a NATO sea,” Russian news agencies quoted senior Foreign Ministry official Andrei Kelin as saying.
Russia, which annexed Ukraine’s Crimea in 2014, has its own Black Sea Fleet based at Sevastopol.
The NATO summit takes place as relations between Russia and the alliance are severely strained over Moscow’s role in the Ukraine crisis and in Syria. While Russia says it poses no threat to alliance, NATO is considering what to do to counter what it sees as growing Russian aggression.
Mabus said the United States follows the rules of the Montreux Convention, which states that countries without a Black Sea coastline cannot keep their warships there for more than 21 days. NATO members Turkey, Romania and Bulgaria are all Black Sea Basin countries.
Bulgaria appeared to buckle to Russian pressure on Thursday. Prime Minister Boiko Borisov said he would not join a proposed NATO fleet in the Black Sea because it should be a place for holidays and tourists, not war.
Also increasing tensions with Moscow is the U.S. Navy’s deployment of two aircraft carriers in the Mediterranean ahead the NATO summit as Washington seeks to balance an increase in Russian military activities in the Mediterranean.
“We’ve been in the Mediterranean continuously for 70 years now, since World War Two,” Mabus said. “We’ve been keeping the sea lanes open…It’s what we do.”
http://yalibnan.com/2016/06/17/us-will-stay-in-black-sea-despite-russian-warning-report/