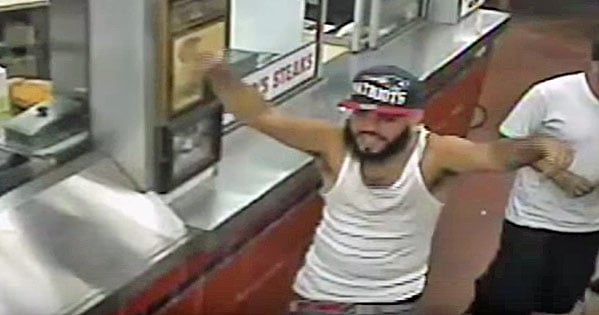 Police in Philadelphia are scouring the area for five men caught on video at a local Geno’s Steaks assaulting two couples then fleeing in their pickup truck and SUV – but not before a witness allegedly heard them scream their allegiance to ISIS.
The assault, captured on a surveillance video that was described by police as “too graphic” to release to the public, occurred June 11. But investigators are still seeking the whereabouts of the suspects, along with the identity and location of a woman described by witnesses as a getaway driver, Philly.com reported.
One of the victims, Patrick Kane, described the assault as horrific.
He told Philly.com he and his wife, Brooke Kane, had just left a wedding and after-hours nightclub with another couple and stopped at Geno’s for something to eat. While finishing their meal, his wife’s friend turned to a nearby group of people and asked for a cigarette, he said.

“That is when the guys just lost their minds,” said Kane, to the news outlet.
Kane said one of the men in the group stood and shoved his hand over the woman’s face and pushed her to the sidewalk.
“Don’t mess with us,” Kane said the man shouted, Philly.com reported. “We belong to ISIS.”

lol, they will deny it when their caught.
Diamond

they need to put that show on the road an come on down here to texas, well certain parts anyway lol
Sponsored content

» The Mexican Drug Cartel Reveals A Major ISIS Style Mess Infiltrating The United States
» please dont let me be late
» U are not alone in this mess!!
» Is There a Way Out of this Mess?
» Don't mess up my face!!!