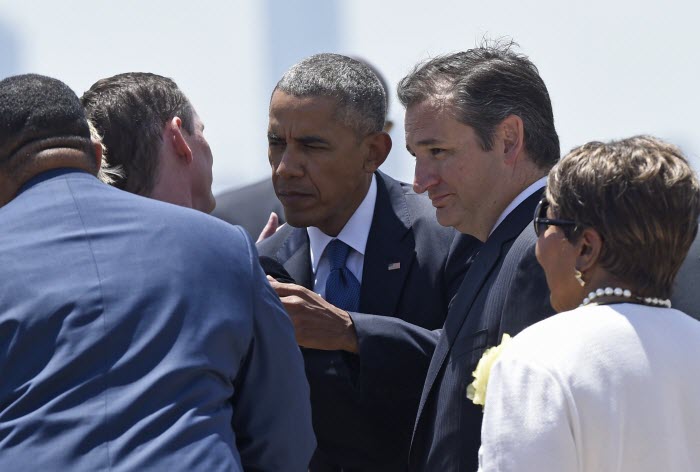 Texas Republican Senator Ted Cruz met with Barack Obama and Nancy Pelosi just days before the Republican National Convention, allegedly to talk about the police murders that are taking place around the country at the hands of the BLM movement and attend the memorial service to honor the five fallen officers in Dallas.
The meeting was kept top secret and virtually no mainstream media reported about this bizarre meeting between Barack Obama and Ted Cruz despite being photographed by the renowned Associated Press news agency.
Only local small news outlets reported on this meeting, sites like The Dallas Morning News for example, but where’s FOX News on this? CNN, MSNBC, ABC? Anyone big?
Obama gave Ted Cruz a ride in his presidential plane Air Force One all the way from Washington DC to Dallas, Texas to attend the memorial service of Black Lives Matter slain police officers. Why would Ted Cruz go with Barack Obama, his supposed nemesis and number one enemy of the country? 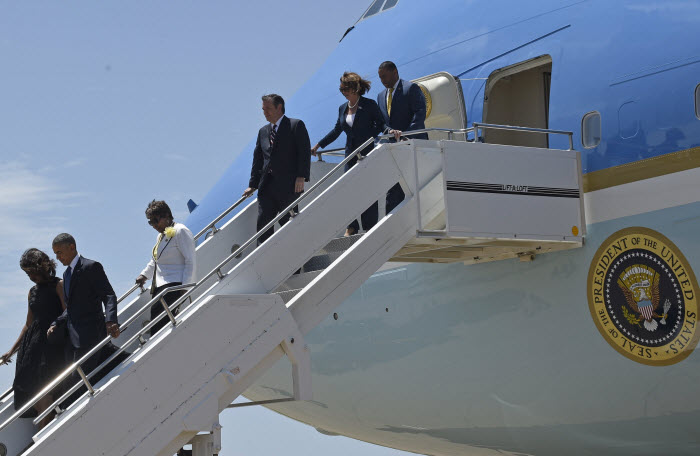 The only explanation given by an official on why Ted Cruz traveled with all his new Democrat buddies on board the Air Force One plane was given by spokesman Phil Novack who said: “President Obama invited Senator Cruz to travel on Air Force One to the memorial service to honor the fallen officers in Dallas. The Senator accepted the invitation.”
But it is rather dubious that Cruz would meet Obama just days before the RNC considering the disgusting show he put at the RNC with his speech where he basically told the Republicans to “vote your conscience” basically meaning to vote for whoever you want rather than for the nominee Donald Trump… INCLUDING Hillary Clinton who he bashed during the primaries.
Unless we are mentally ill and unable to draw logical conclusions we should believe the narrative that Cruz met with Obama and Pelosi just to talk about the cop killings. This is more of a “connect the dots” article so we hope everything will make sense after you finish reading this.
We strongly believe that Ted Cruz met with Obama to talk about the RNC and what Ted’s new role would be in the narrative of the Democrats and how he would aid and support them.
Many Ted Cruz Texas delegates now view Cruz as helping directly or indirectly Hillary Clinton to defeat Donald Trump. Some indicated that they would never vote for Ted Cruz again, regardless of what office he may choose to run for in the future. One Cruz delegate even held a sign “Clinton/Cruz 2020” in front of him. 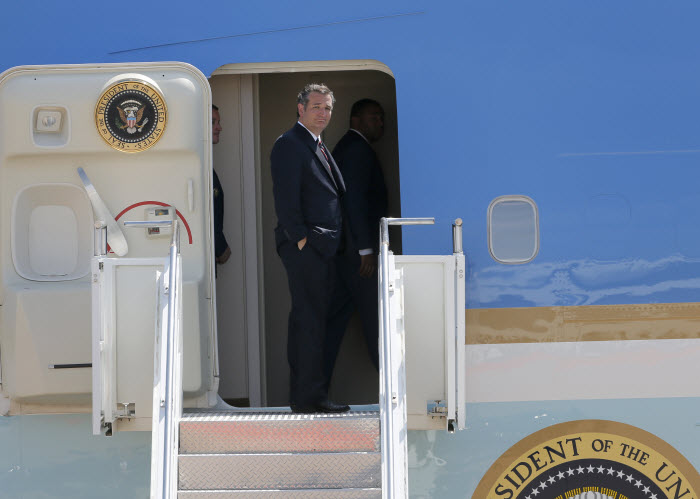 Almost the entire Republican Party is now angry at Ted Cruz for his Judas betrayal of Donald Trump and call for voting on Hillary Clinton! Thanks to Lyin’ Judas Cruz, Hillary Clinton is now laughing like a witch full of satisfaction and is overusing Ted Cruz’s words: “Ted Cruz Was Right About Trump, Vote Your Conscience“.
According to some RNC insiders, Ted Cruz’s official speech included a much friendlier message for the Republican Party and for the Republican Presidential Candidate Donald Trump but then he pulled out of his pocket another speech. He ignored the teleprompters and read a different speech. This was all a big set up that he probably conspired with Obama and Pelosi while on board Air Force One.
Texas Republicans and Rick Perry are preparing to End Ted Cruz’s political career
According to some exclusive reports, Republicans are so angry at Ted Cruz, that the former three term Governor of Texas, Rick Perry is now considering to run for the US Senate in a bid to stop the traitorous bastard Ted Cruz from getting re-elected. On top of those reports, Texas radio host Alex Jones has also claimed to have privately interviewed Congressman John Carter talking about Ted Cruz being done and being replaced by Rick Perry for not endorsing Donald Trump. Congressman John Carter also told Alex Jones that Ted Cruz isn’t a true Texan because Texans always keep their word, referring to the early primary pledge which was not honored by Cruz. Mr. Carter told Alex that Ted Cruz should go back to Canada!
Go to minute 6:22 to see the interview with Congressman John Carter

We’re not really fond of Rick Perry either BUT he is milk and honey when compared to the venomous snake Ted Cruz. At least Rick Perry is hated by the Bush family which is a good sign, while Ted Cruz on the other hand is loved by the Bushes.
These reports may be false or true and we can’t guarantee anything but if Rick Perry doesn’t make a public announcement soon that he is running for US Senate then he either changed his mind or all these reports about Rick Perry’s Senate run were false.
Rick Perry harshly slammed Ted Cruz, saying:

Me and most conservatives are outraged at Ted, who has done nothing in the Senate aside from advancing his failed Presidential campaign.
He continued that anyone who does not want to sign on to help Trump is helping presumptive Democratic nominee Hillary Clinton’s race for the White House.
“You’re putting someone who’s going to be [Supreme Court Justice Ruth Bader] Ginsburg’s clone on the Supreme Court,” Perry said. “Go explain that to your conservative friends.”
Perry noted that he also did not become the nominee, and that Donald Trump defeated several other candidates to get the nod.
“If you don’t want to support him that’s your call, but this country is way more important than any one individual,” said the former governor. “I don”t get it.”

Now, with this story we conclude that Trump was right all along about Lyin’ Ted. He truly is the scum of the earth. Depending how you put it and how you arrange all the information you now know about Lyin’ Ted, it is now official or unofficial that LYIN’ TED CRUZ has endorsed Hillary Clinton and his political career with the Republican Party has just ended. His new political career as a Democrat may start soon… who knows?
Ted Cruz has been in the news quite often lately even if only in a negative light, he still stole Trump’s time. This must be precisely what he wants. Trump’s attention and the mainstream media attention to be focused on him rather than on Hillary Clinton. He wants to divert some of the Clinton bashing to himself, acting like a shield.
Therefore this is the last story we will publish on this clown unless he’s turning to an ISIS terrorist and starts blowing up stuff, we will completely ignore him from now on. Our attention will now be focused on Crooked Hillary Clinton. We need to take down the evil witch.
http://www.eutimes.net/2016/07/ted-cruz-met-with-obama-prior-to-rnc-endorses-hillary-rick-perry-set-to-destroy-cruz/