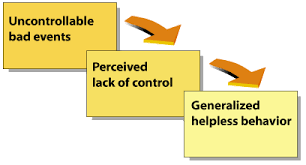 Why are so many Americans simply giving in to the suspension of our Constitution and the widespread criminality among lur leaders (ie Clinton)?
There is a set of psychological reasons why our people, even those that are seemingly more awake than most, would accept this latest tyranny from their government. We know about cognitive dissonance which prevents people from seeing the totality of a threat and thus inhibiting their personal ability to make the paradigm shift needed to accurately perceive the threat. We also know about bystander apathy which stands as an obstacle to getting involved because in this large country, “someone else will do it”. And there is a third psychological reason which prevents us from getting involved because we have been conditioned that our actions cannot make any difference which is reflective of a condition called, learned helplessness.

The Brainwashing of America “Yes we can sacrifice liberty for security. And there is no such thing as a conspiracy.”
Americans have been brainwashed into believing that their government will care for them in their time of need. Has this time in American history been foretold? I believe that it has and that H. G. Wells was the prophetic messenger of the New World Order.
Wells actually understood a concept that modern day psychologists refer to as learned helplessness and he wrote about it in his book, The Time Machine, which was originally published in 1895 and the book was later made into a 1960 hit movie by the same name. The book prophetically told of a time in the distant future where the “normal” inhabitants of the earth would be docile, passive and suffer from the condition that modern day psychologists refer to as “learned helplessness.” What is learned helplessness?

Why won’t America stand up for herself? Why is the country, once a country which possessed courage and conviction, now sitting idly while allowing itself to be taken to the slaughter without so much as a whimper?
The answer to the above question lies in the psychological concept known as “Learned Helplessness” as discovered by Martin Seligman in the 1960’s.
“Learned helplessness” occurs when an animal, or a person, is repeatedly subjected to an aversive stimulus that it cannot escape from. Eventually, the animal will stop trying to avoid the stimulus and behave as if it is utterly helpless to change the situation. Even when opportunities to escape are presented, this learned helplessness will prevent any action”.

Phase One
In the first phase of the learned helplessness experiment, Seligman placed a dog on an electrical grid, shocked the dog and noted that the dog would demonstrate the ability to escape the aversive stimulus.
Phase Two
In the second phase, the dog was barricaded on the grid and was unable to escape the painful shocks. Eventually the dog laid down and passively accepted the shock.
Phase Three
Seligman then removed the barricades and the dog could have easily escaped the shocks. However, the dog, conditioned by the prior set of events, simply laid down and accepted the shocks, without mounting any resistance whatsoever. This, in large part, is where America is at today. 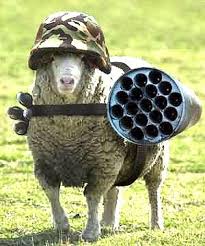 Unitl America discovers that their actions can and do make a difference, the American sheep will continue to accept their enslavement. Is there anything that can turn this around? Yes, the incessant message of freedom and the exposure of the abject criminality of this establishment as well as the sociopathy of Clinton. All of us need to become missionaries of the truth.
http://www.thecommonsenseshow.com/2016/08/22/the-1-reason-why-america-is-submitting-to-the-new-world-order/

» Kissinger: The new world order will be a partnership between America and China
» Chinese media: America "destroys the world order" after Beijing classified as manipulative currency
» Glenn Beck Predicts New World Order. Global Reset. U.S. Will Be A 3rd World State
» The End Of The Obama World Order
» Washington and the ‘ New New World Order’