Report: All Of The “KKK Members” In Hillary Clinton’s New Trump Attack Ad Are PAID ACTORS

Report: All Of The “KKK Members” In Hillary Clinton’s New Trump Attack Ad Are PAID ACTORS

Report: All Of The “KKK Members” In Hillary Clinton’s New Trump Attack Ad Are PAID ACTORS
USE LINK FOR VIDEOS - http://www.shtfplan.com/headline-news/report-all-of-the-kkk-members-in-hillary-clintons-new-trump-attack-ad-are-paid-actors_08262016 Hillary Clinton would like people to think that if you are reading this you are considered “alt-right,” and thus associate with the Ku Klux Klan and other racially divisive groups. She made this point very clear in a speech in Reno, Nevada this week. You, and the other 50 million Americans who refuse to support her candidacy, if you show any signs of supporting Donald Trump’s policies, are nothing short of a white supremacist.
Clinton doubled down on this sentiment with her latest Trump attack ad which likens all Trump supporters to racists:
But if you know Hillary Clinton, then you know that every single word coming out of her mouth is designed to obfuscate facts and demonize anyone who might stand in her way of being elected to the highest office of the land.
According to Joe Wayne at The AntiCoIntelPro Show this is very much the case in her latest attack ad (above), which reportedly uses no actual Klan members, but rather, paid actors masquerading as Trump supporting racists..

And while Clinton hammers Trump because he didn’t immediately disavow the support of KKK Grand Wizard David Duke, perhaps the most telling aspect of this story is that it is actually Hillary Clinton who hob-knobs with racists, as evidenced by her comments about the late Senator Robert Byrd:

“Today our country has lost a true American original, my friend and mentor Robert C. Byrd… Senator Byrd was a man of surpassing eloquence and nobility… Robert C. Byrd led by the power of his example, and he made all of us who had the honor of serving as his colleagues better public servants and better citizens. “

As it turns out, Byrd is a confirmed member of the Ku Klux Man:

When Byrd was 24-years-old, he joined the Klan because he was worried that during World War II, he might have to fight alongside “race mongrels, a throwback to the blackest specimen from the wilds.” Bryd wrote those words in 1944 to Sen. Theodore Bilbo, a staunch segregationist

Of course you’ll never see this report carried by ABCNBCCBSCNN, but that doesn’t make it any less true.
And just to prove the above, here is all the evidence you need from Twitter user Nat Shupe: 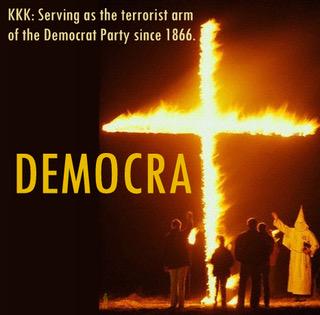 If anyone in this Presidential race is a supporter of organizations whose sole purpose is to divide the American people through race wars, it’s Hillary.
http://www.shtfplan.com/headline-news/report-all-of-the-kkk-members-in-hillary-clintons-new-trump-attack-ad-are-paid-actors_08262016