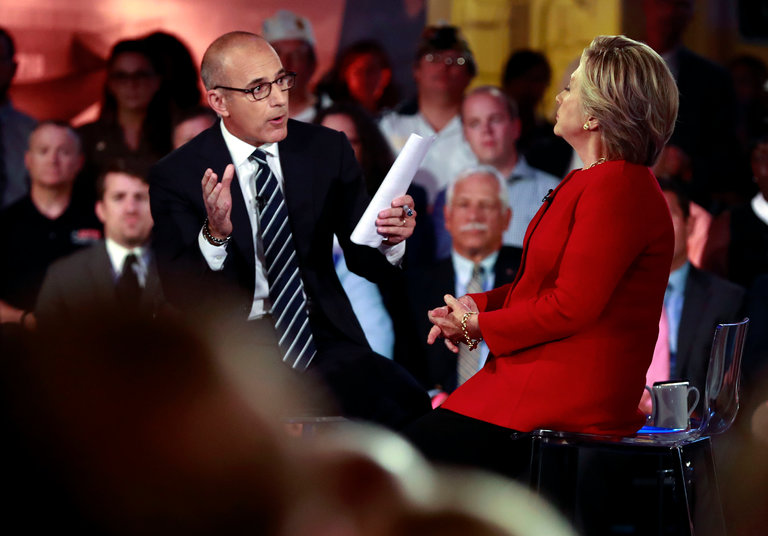 Matt Lauer with Hillary Clinton during Wednesday’s forum at the Intrepid Sea, Air & Space Museum in Manhattan. Credit Doug Mills/The New York Times
It was a high-stakes political moment, far from the chummier confines of the “Today” show and, for Matt Lauer, NBC’s stalwart of the morning, a chance to prove his broadcasting mettle on the presidential stage.
The consensus afterward was not kind.
Charged with overseeing a live prime-time forum with Donald J. Trump and Hillary Clinton — widely seen as a dry run of sorts for the coming presidential debates — Mr. Lauer found himself besieged on Wednesday evening by critics of all political stripes, who accused the anchor of unfairness, sloppiness and even sexism in his handling of the event.
Granted 30 minutes with each candidate, who appeared back-to-back at the Intrepid Sea, Air & Space Museum in Manhattan, Mr. Lauer devoted about a third of his time with Mrs. Clinton to questions about her use of a private email server, then seemed to rush through subsequent queries about weighty topics like domestic terror attacks.
When an Army veteran in the audience asked Mrs. Clinton to describe her plan to defeat the Islamic State, Mr. Lauer interjected before the candidate could begin her reply.
“As briefly as you can,” he said, one of several moments where the anchor spoke over Mrs. Clinton to remind her that their time was running short.

Hillary Clinton and Donald Trump at the Presidential Forum: Analysis

It wasn’t the first debate, but at least Ms. Clinton and Mr. Trump were on the same stage on Wednesday, though not at the same time. Here’s how we analyzed tonight’s forum live. 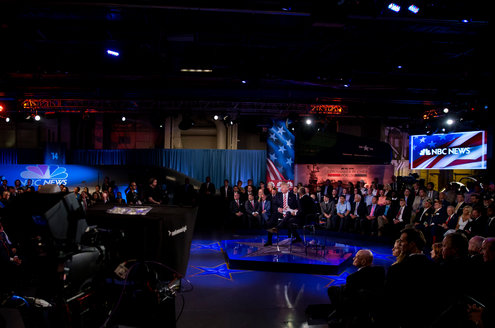 Mr. Trump stormed onstage in his familiar motor-mouth style, often talking over Mr. Lauer and declining to directly answer many of his questions. At times, Mr. Lauer — who has conducted fewer adversarial interviews with Mr. Trump than his colleagues on NBC’s political desk — appeared flummoxed by his subject’s linguistic feints.
Drawing particular ire was the moment when Mr. Trump asserted, with his usual confidence: “I was totally against the war in Iraq.”
In fact, Mr. Trump initially said he supported the war, a point that Mrs. Clinton had raised earlier in the evening, citing an interview that Mr. Trump had given to Howard Stern. But Mr. Lauer left the assertion unchallenged, zipping along to his next question about Mr. Trump’s professed tendency to “say things that you later regret.”
Journalists and longtime political observers pounced. “How in the hell does Lauer not factcheck Trump lying about Iraq? This is embarrassingly bad,” wrote Tommy Vietor, a former aide to President Obama. Glenn Kessler, the chief fact checker at The Washington Post, posted a link to NBC’s check of Mr. Trump’s claim and wrote: “@MLauer should have been prepared to do this.”
“Lauer interrupted Clinton’s answers repeatedly to move on. Not once for Trump,” Norman Ornstein, the political commentator, wrote in a Twitter message, adding: “Tough to be a woman running for president.”
On social media, surrogates for Mrs. Clinton began mounting a sustained attack on the anchor. “Imagine if @NBCNews had done its job,” wrote Nick Merrill, her press secretary, on Twitter. Neera Tanden, a close Clinton ally, was even harsher: “I guess the good news is that Matt Lauer isn’t moderating an actual debate,” she wrote.
The criticism captured what has become a common complaint about media coverage during this election: that news organizations and interviewers treat Mrs. Clinton as a serious candidate worthy of tough questions, while Mr. Trump is sometimes handled more benignly.
Mr. Lauer did manage to extract several head-turning statements from Mr. Trump. He confronted Mr. Trump with a crass Twitter message from 2013 in which the future candidate suggested that sexual assaults in the military were a logical result of men and women serving together. “It is a correct tweet,” Mr. Trump said.
When Mr. Lauer asked if Mr. Trump actually believed he knew more about the Islamic State than American generals, the candidate replied: “The generals have been reduced to rubble.” When Mr. Lauer brought up Mr. Trump’s admiration for President Vladimir V. Putin of Russia, noting that Mr. Putin had invaded Ukraine and was suspected of hacking Democratic emails, Mr. Trump refused to say a negative word about him. “Do you want me to start naming some of the things that President Obama does?” Mr. Trump asked.
Still, with the formal debates set to begin on Sept. 26, Mr. Lauer’s performance seemed to preview the troubles that television moderators could face in balancing fairness with accountability. Mr. Trump, with his Houdini-like ability to squirm out of direct answers, is a particularly tough subject for interviewers, who will be forced to determine on the fly when to interrupt with a prime-time fact-check. Chris Wallace, the Fox News anchor who will handle the third presidential debate, drew criticism this week when he said, “I don’t view my role as truth-squading.”
If Mr. Lauer — who was passed over to host a debate in favor of his NBC colleague Lester Holt — was seeking a piece of the moderator experience, he got it. Warts and all.
http://www.nytimes.com/2016/09/08/us/politics/matt-lauer-forum.html?smid=nytcore-ipad-share&smprod=nytcore-ipad&_r=1