A view of the San Andreas fault in the Carrizo Plain. A valley is deeply eroded along the fault. (U.S. Geological Survey)

The rumbling started Monday morning deep under the Salton Sea. A rapid succession of small earthquakes — three measuring above magnitude 4.0 — began rupturing near Bombay Beach, continuing for more than 24 hours. Before the swarm started to fade, more than 200 earthquakes had been recorded.
The temblors were not felt over a very large area, but they have garnered intense interest — and concern — among seismologists. It marked only the third time since earthquake sensors were installed there in 1932 that the area had seen such a swarm, and this one had more earthquakes than the events of 2001 and 2009.
The quakes occurred in one of California’s most seismically complex areas. They hit in a seismic zone just south of where the mighty San Andreas fault ends. It is composed of a web of faults that scientists fear could one day wake up the nearby San Andreas from its long slumber. 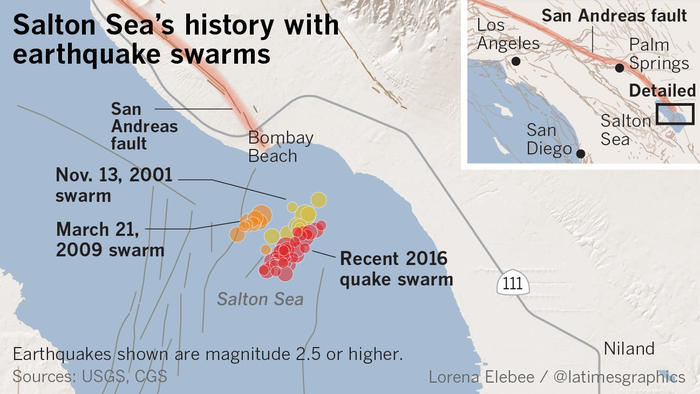 The San Andreas fault’s southernmost stretch has not ruptured since about 1680 — more than 330 years ago, scientists estimate. And a big earthquake happens on average in this area once every 150 or 200 years, so experts think the region is long overdue for a major quake.

The swarm actually increased the likelihood of a much more major quake in Southern California, at least temporarily.
According to the U.S. Geological Survey, for the seven-day period following Tuesday, the chances of a magnitude-7 or greater earthquake being triggered on the southern San Andreas fault are as high as 1 in 100 and as low as 1 in 3,000. The chances diminish over time.
Experts said it’s important to understand that the chance of the swarm triggering a big one, while small, was real.
“This is close enough to be in that worry zone,” seismologist Lucy Jones said of the location of the earthquake swarm. “It’s a part of California that the seismologists all watch.”
The swarm began just after 4 a.m. Monday, starting earthquakes three to seven miles deep underneath the Salton Sea.
The biggest earthquakes hit later that morning, a 4.3, and then a pair later at night, another 4.3 followed by a 4.1. There was another burst of activity on Tuesday night.
The earthquakes hit in a sparsely populated area, less than four miles away from Bombay Beach, population 171, sitting on the edge of the Sonoran Desert.
When swarms hit this area — the northern edge of the so-called Brawley Seismic Zone — it’s enough to give earthquake experts heartburn. And there’s reason for that.
Just 12 hours after a 6.3 earthquake hit south of the Salton Sea in 1987, an even larger temblor, a 6.6, ruptured six miles away — the Superstition Hills earthquake. 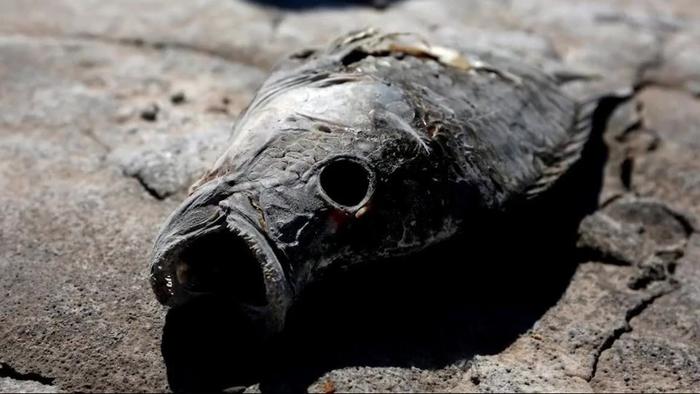 Seismologists are worried the recent earthquake swarm at the Salton Sea will temporarily increase the likelihood of a major quake in Southern California.

No deaths were reported from the earthquake in this sparsely populated area, but it did suggest how an earthquake on one fault could add stress on another fault.
The San Andreas fault is even closer to where Monday’s earthquake swarm hit — less than four miles away.
“When there’s significant seismicity in this area of the fault, we kind of wonder if it is somehow going to go active,” said Caltech seismologist Egill Hauksson. “So maybe one of those small earthquakes that’s happening in the neighborhood of the fault is going to trigger it, and set off the big event.”
And that could set the first domino off on the San Andreas fault, unzipping the fault from Imperial County through Los Angeles County, spreading devastating shaking waves throughout the southern half of California in a monster 7.8 earthquake.
“The southern San Andreas is actually seismically fairly quiet. It doesn’t really make noise. So to have something right next to the main strand making a little noise — you have to pay attention to how it might be transferring stress onto the main strand of the fault,” said USGS research geologist Kate Scharer.
And the problem with the southern San Andreas fault — the stretch from Monterey County to the Salton Sea — is that when it goes, it’s probably going to go big, such as with a magnitude-7 or higher quake, Scharer said. 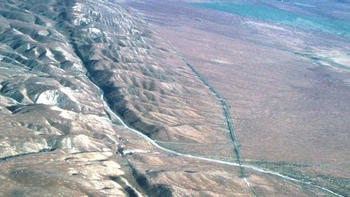 The San Andreas is also thought to be smoother than other faults, making it easier for an earthquake to keep plowing ahead into a longer, more powerful rupture, rather than ending as a smaller event, Hauksson said.
There have been other earthquakes in past decades that have raised fears among scientists that they could wake the sleeping San Andreas.
One of the biggest concerns came in 1992, when the magnitude-7.3 Landers earthquake struck the Mojave Desert. That sparked aftershocks, including the magnitude-6.5 earthquake in Big Bear three hours later, and involved faults that were close to the San Andreas.
“We were at a high level of concern then,” Jones said. “And that lasted through the aftershock sequence through the next year, because the aftershocks were coming down and hitting the San Andreas.”
A San Andreas earthquake starting at the Salton Sea has long been a major concern for scientists. In 2008, USGS researchers simulated what would happen if a magnitude-7.8 earthquake started at the Salton Sea and then barreled up the San Andreas fault, sending shaking waves out in all directions.
By the time the San Andreas fault becomes unhinged in San Bernardino County’s Cajon Pass, Interstate 15 and rail lines could be severed. Historic downtowns in the Inland Empire could be awash in fallen brick, crushing people under the weight of collapsed buildings that had never been retrofitted.
Los Angeles could feel shaking for a minute — a lifetime compared with the seven seconds felt during the 1994 Northridge earthquake. Shaking waves reach as far as Bakersfield, Oxnard and Santa Barbara. About 1,600 fires spread across Southern California. And powerful aftershocks larger than magnitude 7 pulverize the region, sending shaking into San Diego County and into the San Gabriel Valley.
The Shakeout simulation says it’s possible that hundreds of brick and concrete buildings could fall, and even a few fairly new high-rise steel buildings. The death toll could climb to 1,800 people, and such an earthquake could cause 50,000 injuries and $200 billion in damage.
http://www.latimes.com/local/lanow/la-me-ln-earthquake-swarm-20160930-snap-story.html